On the last day of VERGE 20, five startups that won lightning-round pitch sessions during the Food, Carbon, Circular, Energy and Transport conference competed for the vote of the viewers. The overall winner addressed a unique blend of environmental and social concerns.

This was the first year of this two-round approach, with 25 entrepreneurs pitching throughout the week in market-specific sessions, culminating in the final VERGE Accelerate round. Presenters were given less than three minutes to make a compelling argument to the audience on why their company and innovation should win this year.

The overall winner, change:WATER labs, presented by Diana Yousef, founder and CEO, did just that, after winning the Circular pitch session. Yousef’s pitch began with the stark statistic that half of the world’s population lives without access to a safe, clean toilet, given lack of sewage infrastructure in their area. The common solution thus far has been offline portable toilets, which Yousef claims is an $18 billion-year investment, given the frequency of maintenance.

Change:WATER labs’ iThrone creation cuts down on waste logistics by eliminating the waste inside the toilet itself and turning it into pure water. This is done through a membrane that evaporates raw sewage without any energy source and allows for a functional, safe toilet without the need for power or plumbing, Yousef said.

Yousef spoke about the first deployment of iThrones in Uganda: "Currently, our first iThrones are servicing the population and providing them with safe and sustainable sanitation. Harvested vapor will provide pure water to the local hospital and dried urine salts will fertilize local agriculture."

An added benefit, Yousef noted, is that iThrone "makes sanitation much more accessible because it's five times cheaper than comparable toilets. It cuts collection costs in half, and makes collections 20 times more scalable, demonstrating pent-up demand for this type of solution."

This cost-effective and efficient innovation has earned change:WATER labs funding from the Turkish government, the United Nations Development Program and other private-sector contractors, as well as recognition from Bloomberg, The Daily Beast and the Boston Globe.

VERGE Accelerate runner-up ConserWater Technologies, represented by CEO Aadith Moorthy, won the Carbon Pitch session earlier in the week. Moorthy’s compelling narrative began with ConserWater’s impetus five years ago: "I was traveling to a small village in South India, and I saw a funeral procession. That year, a farming family had committed suicide because the monsoon rains had failed. And that got me thinking: Why do farmers have a struggle like this? This is the face of climate change that brought me to conserve water, where we use [artificial intelligence] to help farmers to mitigate climate change at scale."

ConserWater’s software analyzes satellite data and images to help predict actionable insights about the farmland, such as soil moisture, nutrients and carbon levels, without using sensors or hardware. "We’re able to help the farmers grow more with less by optimizing their resource usage and verifiably increasing their soil carbon sequestering," Moorthy said.

The company already has global operations, and Moorthy claims ConserWater is running the world’s largest international soil carbon market, with credits associated with millions of acres of farmland that can be purchased by companies, governments or individuals for offsetting emission. According to ConserWater, farmers can make up to $40 or more per acre through the marketplace.

Nancy Pfund, managing partner of DBL Partners, and Meera Clark, senior associate of Obvious Ventures, two industry experts who provided feedback on the VERGE Accelerate pitches, gave Food pitch session winner eggXYt their votes. Clark justified her choice given the potential of the business, and like Pfund, saw it as having market appeal.

EggXYt uses CRISPR, the gene-editing tool, to detect the genes of chicken eggs through the shell. Co-founder and CEO Yehuda Elram said the technology helps mitigate the billions of dollars that go into incubation and hatching of eggs, only to kill over 4 billion male chicks annually that are not viable for the market. EggXYt is developing what Elram calls "the ultrasound for eggs," which allows for sex detection of chick embryos immediately after the eggs are laid and before the eggs enter the 21-day incubation process. The non-incubated male eggs can be sent to market.

The other two presenters spoke about their company’s interface in the energy and electric grid.

Energy pitch session winner Uprise Energy, represented by co-founder and CEO Jonathan Knight, pitched Uprise’s mobile power station. The company has created a portable renewable energy system, which can provide reliable power through the patented 10-kilowatt portable wind turbine. Knight said the portable turbine is designed to fit in a standard shipping container and only takes an hour to set up by one person.

Andrew Krulewitz, co-founder and CEO of Flux, winner of the Transport pitch session, spoke about his startup’s potential role in reducing the cost barrier to electric vehicle deployment. Flux’s model offers what is essentially a power purchase agreement for EVs that helps defray the capital expenditure, with plans starting at $99 per month and 10 cents per mile. 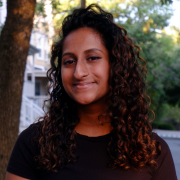 How the aluminum industry is forging a path toward decarbonization