Businesses can’t ignore the growing consumer interest in the origin of their purchases. From food and beverages to electronics to luxury items, more people want to know if the products they are buying are sustainably sourced and what labor activities went into making them.

This demand calls on brands to trace what happens at any given point in their product pipelines, especially in the bottom tier — workers in third-world countries who toil every day to grow, mine and sell raw materials but can’t even open a bank account for the lack of verifiable economic identity.

What if there is a way to kill two birds with one block? Blockchain, the technology behind Bitcoin, could help companies improve supply chain traceability and lift end producers out of economic limbo.

BanQu, a non-crypto blockchain software platform, seeks to give impoverished farmers and producers a digital economic "passport" while helping companies acknowledge their contributions to the supply chain. Customers of the startup include beermaker Anheuser-Busch InBev and food manufacturer Mars, which are tracking farmers that supply the raw materials used in their products.

When BanQu founder Ashish Gadnis worked in the Democratic Republic of Congo as a volunteer CEO for the U.S. Agency for International Development, he met a mother unable to secure a loan to pay her children’s tuition. She had been growing high-quality barley for years, but banks didn’t consider the scratch paper receipts from her broker valid proof of sale.

"The fundamental flaw in this whole system is that if you can't prove your existence, then people don't take you seriously," Gadnis said.

The ability to digitize these supply chains is the largest transformation in technology we will ever see in our lifetime, bigger than anything that happened in the 1990s.

It was 2014, and the world was enamored with Bitcoin. As a tech entrepreneur, Gadnis saw the potential in the digital currency's underlying transaction technology, blockchain, to increase end farmers’ visibility in the global economy.

Blockchain is a decentralized ledger that stores data on "blocks," keeping an immutable digital record of activities. Unlike centralized systems that are vulnerable to hacking or corruption, blockchain won’t allow any tampering without the consent of everyone on the distributed network, which makes it safer and more transparent.

Gadnis founded BanQu in 2015 and made it run entirely on a mobile site, so that anyone with either a cell phone or Internet access could use it. He opted not to design the platform as a smartphone app so that even those who only have basic SMS phones can sign up for the free service.

After each sale, the BanQu service sends a text message to farmers with details of the transaction, validating their economic activities and creating digital trails that will live forever on the blockchain. Those records can help them access financial services such as banking and lending. At the same time, those records help companies pinpoint who produced their cacao, barley and diamonds, Gadnis said.

When explaining BanQu to corporations, Gadnis presents it as a technology that can improve supply chain traceability and transparency, making transactions more efficient, which then can generate better margins as well as positive social and environmental impact.

Companies have been rising to the opportunity, too. BanQu has a roster of high-profile customers that pay an annual subscription fee to access its services, such as Mars and Shell. It has raised $4 million in funding over three rounds, including a Series A round from AB InBev in June, according to Crunchbase.

The beer giant partnered with BanQu in 2018 to provide blockchain-powered economic identities to over 4,000 direct farmers in Zambia, Uganda and India. This new round of funding aims to deepen that partnership and help AB InBev achieve its 2025 Sustainability Goals, one of which is making sure 100 percent of its over 35,000 direct farmers will be "skilled, connected and financially empowered."

Gadnis is not the only entrepreneur exploring the potential of blockchain as a traceability tool for companies eager to verify the source and sustainability of the food, goods and commodities they buy from supply chain partners.

Daniel Jones, founder of Bext360, another SaaS blockchain platform that makes it simpler for consumers to understand the environmental and social impact of their purchases, likened his software to a "Salesforce for sustainability and traceability."

Bext360's blockchain can store data about the time, date and location of transactions, amount of payment and metrics for sustainable sourcing. It even can store satellite images that show if certain producers are polluting water, he said.

"The ability to digitize these supply chains is the largest transformation in technology we will ever see in our lifetime, bigger than anything that happened in the 1990s," Jones said.

He brought up the importance of interfacing with key financial institutions such as the World Bank and traditional banks such as HSBC to get capital in the hands of producers, so they can interact with consumers more directly and not be exploited by "bad actors," he said.

Why businesses are paying attention

Today, businesses are taking notice of the market potential and social imperative for open and sustainable supply chain management. Nestlé also has committed to providing better supply chain transparency through blockchain after being repeatedly berated for labor issues in its cocoa supply chain over the years.

In July, the multinational food conglomerate announced a collaboration with blockchain platform OpenSC to create a service that helps consumers track their food back to the farm. Nestlé previously worked with IBM Food Trust to trace certain products using blockchain. (Nestlé could not comment in time for this story.)

"There is a strong interest in the deployment of blockchain for product provenance, often referred to as pedigree," Hewett said.

Some consumers are also willing to pay a premium for the transparency, which could help producers earn more for their labor and incentivize businesses to quickly adopt blockchain technology, she said.

The enthusiasm for blockchain must not mask the potential pitfalls of its widespread adoption. The nascent technology is still relatively unstable. Now is a good time for real-world experimentations, but blockchain is not yet ready to support full-scale production of all supply chains, Hewett said.

Even if the technology is ready, large-scale adaptation across industries still could take a long time due to the complexity of deployment.

The enthusiasm for blockchain must not mask the potential pitfalls of its widespread adoption.

"When deploying a blockchain solution, careful consideration should be given to the design of the solution and ecosystem governance, including security, data privacy, integrity, interoperability and business paradigm shift considerations," Hewett said.

To ensure data privacy and security, Gadnis runs BanQu on a "permissions ledger" instead of a public ledger. That means only those with permissions can access and alter information on the chain. It helps maintain the identity of each participant on the network and allows farmers to own, access, monetize and permit their data, Gadnis said.

The information stored on the chain doesn't necessarily need to be public. People can do anything they want with their own data, which is the most important aspect of blockchain, Jones said. Gadnis describes this absence of centralized control in blockchain as a "data democracy."

"There's a lot of data that is now being captured in the name of helping poor people, but who makes all the money?" Gadnis said. "It's people who actually capture your data, own your data — they make the money. So I call it more of a data dictatorship."

Done right, blockchain has the potential to solve one of the world’s most dire issues — poverty. More than 700 million people still live in extreme poverty today, surviving on less than $1.90 a day, according to the United Nations’ Sustainable Development Goals.

That’s one in 10 people in the world. Therefore, the first United Nations Sustainable Development Goal is dedicated to eradicating extreme poverty for "all people everywhere, currently measured as those living on less than $1.25 a day," and BanQu is eager to do its share.

"Our goal is to reach and enable 100 million people to get out of extreme poverty, and $100 million in profitable revenue by the end of 2023," Gadnis said. 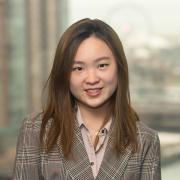 What a summer at GreenBiz taught me about sustainability

See all by Cyan Zhong