Dannon will work directly with farmers to transition away from GMOs as sustainability pressures prod startups and big brands alike to change how food is grown.

Agriculture is at an inflection point, to borrow a phrase from the technology industry (and math) when it realized the world was changing direction.

With responsibility for a third of global warming and needing to feed 9 billion people by mid-century, agriculture is feeling the heat — and opportunities — to change.

Consumers increasingly want to know where their food comes from and how it is made — eschewing genetically modified foods, eggs from caged chickens and so on — while the world’s supply of fresh water and arable land shrinks. Governments are cracking down on food waste while investors want to know how palm oil is sourced.

"Food is a $7 trillion business. And food is in a crisis," said Will Rosenzweig, executive director of the Food Business School, founding CEO of the Republic of Tea and former venture capitalist, speaking to a group of agriculture entrepreneurs at the University of California at Davis this week. "We are at an inflection point" in how food is grown, he said at an event held by the Davis Institute for Innovation and Entrepreneurship.

Wednesday, Dannon, the U.S. yogurt company and division of Danone, became the latest food company to change operations based on these pressures. It announced it will begin to work directly with farmers so it can source milk and other ingredients that are not genetically modified and encourage those farmers in sustainable practices.

Starting in July, Dannon will start to transition its milk sourcing for its Oikos, Danimals and Dannon brands to avoid GMOs. Those brands represent half the company's sales volume. Starting in 2017 it will work with farmers to make sure that the cows that supply Dannon's milk are fed non-GMO feed. The company, which Oxfam America recently ranked as a laggard on sustainability issues, claimed that action would be a first for a major, non-organic yogurt company.

"We created a new way to work with dairy farmers to improve our shared sustainability priorities," said Mariano Lozano, president and CEO of Dannon in a statement. 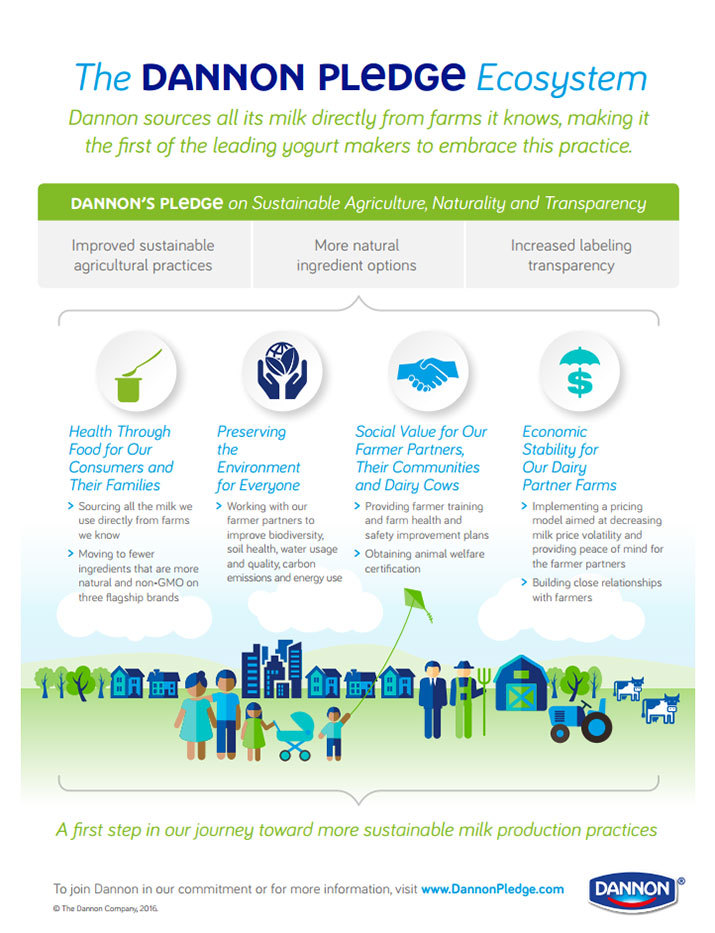 He said Dannon's sustainability pledge will prioritize work with farmers on soil, water, biodiversity, carbon and energy, and animal welfare. Dannon said it has begun encouraging farmers to rotate crops and reduce fertilizer, pesticide and herbicide application in the production of feed for a portion of the cows providing the company’s milk supply.

But much of the change in agriculture and food is coming from small companies and startups.

Silicon Valley has poured money into ag innovation. According to AgFunder, venture capital investing in ag innovation doubled to $4.6 billion in 2015 from the already record breaking amount the year before. In 2015, investors put money in 499 companies in 526 deals.

"Ag tech is really hot right now," said Cleveland Justis, executive director of the UC Davis Institute for Innovation and Entrepreneurship. Within entrepreneurism generally, ag tech "has a lot of interest from Silicon Valley but don’t forget about companies like Revolution Foods, the multitude of healthy food delivery startups and the like. The focus on sustainability is obviously also a huge trend," he said.

Technologies that save water or help with carbon sequestration are attracting academic interest, new entrepreneurs and investor money, he noted. That led the Institute, which normally focuses on business school endeavors, to its third year of hosting an agriculture entrepreneurism academy. But the themes were as much about technology as food, with the likes of Blue River Technology, which builds computer vision, machine learning and robotics for agriculture, and Ceres Imaging which builds aerial imaging systems for agriculture fields, presenting.

Today, agtech is being driven by a confluence of technologies: ubiquitous mobile computing that de-tethers computing from the desktop and brings technology outdoors and to industrial environments.

"Gone are the days when agtech encompassed simply seed genetics and biofuels," he said in commenting on the 2015 AgFunder investment trends. "Today, agtech is being driven by a confluence of technologies: ubiquitous mobile computing that de-tethers computing from the desktop and brings technology outdoors and to industrial environments; inexpensive energy storage and capture to run these devices; sophisticated sensors to automate data gathering." He also mentioned drones and robotics that can operate in complex outdoor environments, digital imagery and Big Data analytics tools.

But both Leclerc and Justis raised the issue of solutions in search of a problem, or what Leclerc called fear of an agtech bubble if products are unleashed on a market that doesn't need them.

A world running out of fresh water that needs to feed 2.5 billion more people in a few decades and serve consumers' increasing interest in locally grown, healthy food produced in ways that do not harm the earth is one broad definition of the problem driving agriculture today.