Inside California's clean-economy leadership — for now

California's economy stands strong as the persuasive counterargument to the climate-denier myth that embracing policies and strategies that are good for the planet is bad for business.

Between 2006 — the year legislators embraced the greenhouse-gas reduction targets in AB 32 (aka the California Global Warming Solutions Act) — and 2015, the state's gross domestic product per capita grew by almost $5,000 for every person, according to the ninth edition of the California Green Innovation Index.

Put another way, the state is among the most efficient and least carbon-intensive economies in the world — the only other state that has lower emissions versus GDP ratio is New York (as of 2014).

Renewable power represented almost 22 percent of California's electricity generation capacity by the end of 2015, compared with just 1.8 percent the year before and far above the national average of 7.3 percent for that same period.

Another encouraging sign: There are 8.5 jobs in solar or wind generation for each position associated with fossil-fuels production (compared with the average ratio of 2.5-to-1 across the United States). What's more, more than 300,000 jobs were in the energy-efficiency sector at the end of 2016, twice the number employed in the No. 2 state Texas. (About 2.2 million jobs were recorded nationally, according to the U.S. Department of Energy data used in the index.) "California policies have allowed the state to generate more economic growth while producing few emissions," said Adam Fowler, an economist with Beacon Economics, which collaborated with nonprofit Next 10 to produce the research. "In 2014, every $10,000 of economic activity in California resulted in 55 percent fewer CO2 emissions than $10,000 of economic activity yield in the rest of the nation." (GreenBiz Executive Editor Joel Makower is an adviser on the Green Innovation Index methodology.)

We need climate policies 2.0 to really get us going.

That's almost double the per-capita growth rate posted for the U.S. economy, and it's due in large part to a serious focus on encouraging energy and fuel efficiency, as well as investments in renewable energy. The state boasts one of the world's largest economies (many estimates rank it sixth). Its employment rate grew by 13.8 percent between the depths of the recession in February 2010 and this March; meanwhile, its emissions dropped 9.4 percent between 2004 and 2014. Legislators recently agreed to extend California's cap-and-trade program, first introduced about five years ago, which has made it more viable for large emitters to engineer big reductions.

"You don’t have to accept the notion that green legislation was driving all that, but you do have to at least accept that these were not undue burdens on the economy," Fowler said.

But the state faces a tough road ahead. Its overall rate of emissions reductions is stalling: off just 0.34 percent between 2014 and 2015, compared with about 0.73 percent the previous year and sharper cuts before that. That's enough to meet its short-term targets, but things look less certain beyond that. The net effect: the state will need to reduce emissions by close to 5 percent annually between 2020 and 2030 if it is to meet its 2030 goals. That's far larger than the average decreases of recent years.

"There is a recognition that we need climate policies 2.0 to really get us going, both from a regulatory and technology perspective," said Noel Perry, founder of Next 10.

The single biggest culprit to slowdown: a troubling increase in emissions from the transportation sector, which accounts for about 38.5 percent of the total.

During 2015 (the last year for which complete data is available), emissions related to cars, buses and trucks grew by 3.1 percent. (Overall transportation sector emissions including aviation activities rose 2.7 percent.) The researchers blamed the state's affordable housing crisis, which has forced people to make longer commutes.

A telling metric: Between 2014 and 2015, the state recorded a 4.8 percent decrease in the number of trips taken using public transportation. Commute times in personal vehicles are also lengthening, which results in higher emissions per trip — especially when the flow of traffic slows down to a crawl.

"We can't shy away from this. It is something that the state needs to face head-on," Fowler said.

Historically speaking, the state has benefited from its tough fuel-efficiency standards. But the time has come for the state to move forward more quickly with the "electrification of our economy," he noted.

We can't shy away from this. It is something that the state needs to face head-on.

By the end of 2015, almost 173,000 zero emissions vehicles were registered in California, up about 46 percent from the previous year. The charging infrastructure for electric cars, however, isn't keeping up, curbing the rate of adoption, according to the index. As of mid-July, there were an estimated 13,282 stations across the state, according to information from the Alternative Fuels Data Center. That's about 30 percent of all the stations installed across the United States, but the state ranks near the bottom of the list when it comes to the number of stations installed versus the number of electric vehicles on the road.

The "creative destruction" happening across the automotive sector — with companies such as Volvo pledging to phase out internal combustion engines starting in 2019 and countries such as the United Kingdom and France pledging to ban sales of gasoline-fueled vehicles starting around 2040 — is a positive sign, Fowler said.

Another optimistic indicator is the state's broad adoption of low-emissions buses, mostly through the replacement of diesel-powered fleets with those running on natural gas alternatives. Now, many cities are seeking to electrify — with more than $1 billion in funding requested for charging infrastructure dedicated to fleets.

The path forward will require substantial innovation in technology by the private and public sector, according to Next 10, and here, too, the state is well-poised to deliver. "This idea that we need to freeze time and stay with some sort of fossil fuels economy, it's not how our economy has ever worked," Fowler said. 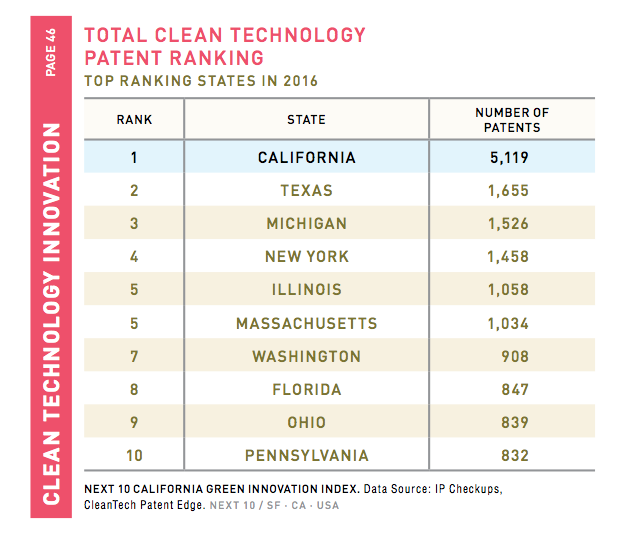 Although investments in "clean technology" decreased by 7.6 percent nationwide to $2.5 billion during 2016 it increased 12 percent in California, which accounted for two-thirds of that total. The state registered 5,119 related patents last year for advances across green materials, energy efficiency, biofuels, energy storage and solar technology.

One segment to watch especially closely is energy storage, Perry said, because the technology will play a role in electrifying both the transportation sector and the power grid. Among the most notable investments during 2016: the $200 million in early-stage funding for Advanced Microgrid Solutions, which develops systems for grid management.