It’s a nondescript building in a nondescript office park along a nondescript parkway in Plano, Texas, about 30 miles north from the center of Dallas. But there’s a revolution shaping up inside.

The IoT Foundry, part of a network of AT&T tech innovation centers, is a hub for the fast-growing Internet of Things, or IoT for short. Amid the quirky Silicon Valley vibe — the rat’s nest of cables, the mobile furniture, the indoor scooters and all the rest — there’s a decidedly serious mission: to envision and invent the next generation of efficiency technologies.

The IoT, as you know by now, represents a digitization of the physical world, a deeply interconnected network where just about everything is embedded with sensors, communications capabilities and other gizmos that enable a given device — a car, a person, pretty much any object anywhere — to be continually tracked, monitored and optimized: where it is, what it’s doing, how well it’s doing that, what kind of attention it needs and more.

Connecting all these “things” — some 50 billion devices will be interconnected by the decade’s end, according to Cisco — has vast potential to improve efficiencies, slashing waste, energy, resources and emissions.

And it will bring great financial benefit. According to a study released last week by McKinsey Global Institute, the IoT has a total potential economic impact of $3.9 trillion to $11.1 trillion a year by 2025, about 70 percent of it in business-to-business applications. Among the biggest applications, according to McKinsey: factory operations and equipment optimization ($1.2 to $3.7 trillion); urban transportation and public health ($930 billion to $1.7 trillion); and logistics and navigation ($560 to $850 billion).

But it’s not simply a matter of wiring things up and getting them to talk to one another. That’s fairly straightforward these days. All the necessary components — an accelerator; ambient light sensor; GPS; gyroscope; magnetometer compass; proximity sensor; sensors that measure temperature, humidity and pressure; a microphone; a power source; and a machine-to-machine communications capability on a 3G cellular network — can be embedded into something as small as, well, a smartphone. Or smaller.

The trick is to find applications that customers want, need and will pay for. And, from AT&T’s perspective, that will utilize the company’s wireless bandwidth, which is its largest revenue source. That means technologies that improve people's lives — and company operations.

“We view ourselves as the vanguard of where the company needs to be in five years,” Craig Lee, director of the IoT Foundry, told me during a recent visit there. “We're a place that AT&T can go to take risks without worrying about failure.”

(Here is a short video of Lee giving an introduction to the Foundry.)

Ideas come to Lee and his team from a variety of sources. Some are referred by one of the company’s other business units to directly address customer needs. Some are internally generated by Lee and his engineers and designers through ideation sessions, or by bringing in a startup that has a promising idea that AT&T can help bring to market. Still others come from The Innovation Pipeline (TIP), AT&T’s crowdsourcing platform that allows company employees to submit, vote on and discuss innovative ideas.

The ideas can be as varied as AT&T’s customers. During my tour of the Foundry and conversation with Lee, for example, I saw prototypes for a device to help potential electric-vehicle drivers overcome range anxiety before they buy; a smart trash can that can signal when it needs to be emptied, among other tricks; and a gizmo to help travelers track lost suitcases. Not necessarily disruptive technologies, but readily accessible examples of IoT’s promise.

The EV device illustrates the circuitous routes some of these innovations take. The genesis was to build a simple device that would-be EV buyers could mount on their existing car's dashboard, which would track their driving and show them how much battery charge they would have if they were driving an electric vehicle. The idea is that over time, people would get comfortable with how their driving habits match up against a battery charge — a virtual test drive before buying.

It took two weeks for Lee and his team to build a fully-functional prototype — basically a circuit board with a 3G cellular connection, a GPS device, accelerometer and some other components. An AT&T executive mounted it on his car to drive to a meeting with an EV manufacturer.

After further tinkering, they settled on a design: a small, inexpensive device about the size of a large tape measure. AT&T provides the hardware, software and analytics.

But they were just getting going. 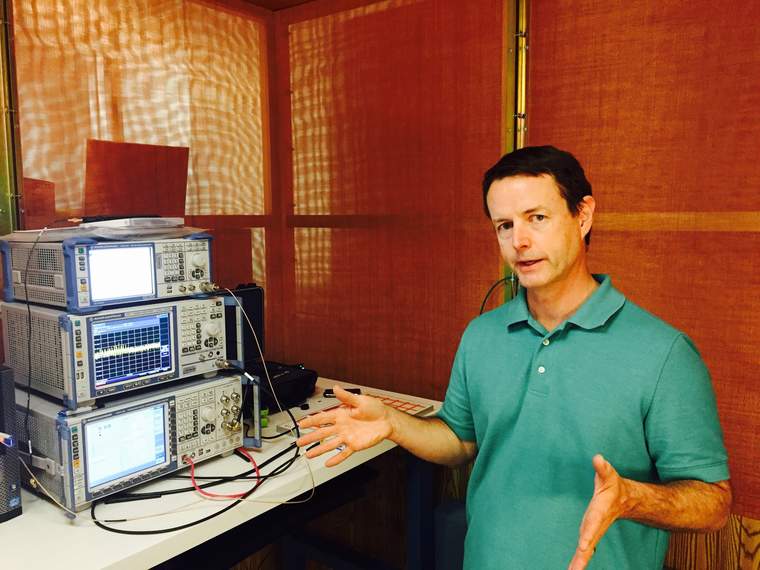 </p><p></p><p></p><p></p><p>Craig Lee, Director of AT&T's IoT Foundry</p>
Lee realized that the device needn’t be limited to EVs. “We've actually got a fleet tool,” he recalled thinking. “So we took the concept one step further and made this into a way for folks to retrofit or outfit their fleets with a low-cost heads-up display. The beauty is it provides GPS, tracking, accelerometer — all the things you would normally get if you would put in a tracking system.”

The finished assembly can do a number of things. For example, Lee explained, it can be associated with a given driver, not a given vehicle. “If the driver is driving multiple pieces of equipment, this is an easy thing for them to move from one vehicle to another.” That means anyone from a truck driver to a pizza delivery person can be connected to a network in an inexpensive way to track routing, safety and other things. (Many professional drivers are prohibited from using their personal smartphones while driving on the job, making those devices ineligible for such tasks.) The result: an inexpensive, non-distracting communications device with vast potential.

And then there’s the trash can — a run-of-the-mill 46-gallon model on wheels, the kind many of us wheel to the curb every week for pickup. Such receptacles also reside in offices for depositing waste paper or disposing of sensitive documents. Lee and his team spent three days finding ways that fitting an off-the-shelf can with electronics and connectivity can make it smart.

Trash bins aren’t always full on pick-up day, or a sudden purge may fill them long before they’re slated to be emptied. That's a problem for an organization with lots of bins, resulting in a lot of wasted time. Using simple sensors and other devices, Lee and his team outfitted a standard can to automatically report its status. The bin also is equipped with tilting sensors, alerting security if the bin is tampered with, protecting against stealing sensitive documents. A network of bins can be readily monitored via a simple Web interface. 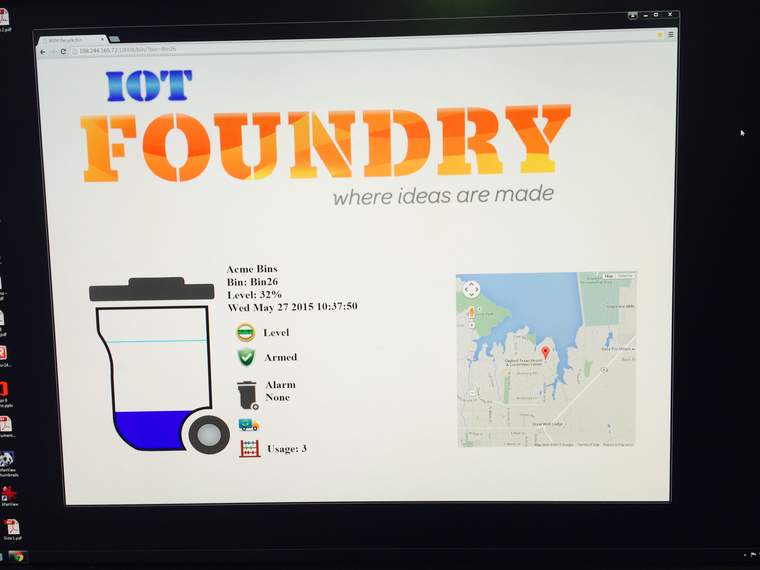 It’s amazing how much you can do in three days with a simple plastic bin.

To be sure, none of these innovations is worldchanging. But they stand to incrementally improve operational efficiency and reduce waste. And they demonstrate how a bit of IT can “smarten” even a dumb trash bin and make it work better.

There’s no end to what’s possible, says Lee. And having a sizeable toolbox of technology can lead to unexpected aha moments.

“Sometimes, we'll just throw stuff in there to get the ideas going. And the customer goes, ‘You know, you've just solved the problem we've never been able to solve before.’ Having that flexibility has allowed us to work up a solution for customers, and meet their needs, even if they don’t entirely know what they are.”

That's the new normal for old-line giants like AT&T. Think like an entrepreneur, design quickly and fail fast — and, in the process, create a smarter, more efficient world.

Where the circular economy meets the Internet of Things

Sensing the Future at HP Labs

Will that M2M solution work? AT&T is hacking the answer

How citizens have become sensors