Today, at the Greenbuild conference in New Orleans, entrepreneur and author Paul Hawken will publicly unveil a project, more than a year in the works, aimed at reducing greenhouse gas concentration in the atmosphere.

You read that right: to reduce, not just stabilize, atmospheric CO2 and other gases, in order to reverse rising global temperatures.

Project Drawdown, as it is named, will produce a book in 2016, detailing the costs and benefits of scores of climate solutions, from light bulb technology to livestock techniques to literacy for teenage girls. For each, Hawken and his team will “do the numbers,” providing detailed, science-based data and econometric models showing how each plays out, based on current technology and how it will likely evolve over the project’s 30-year horizon.

“The book is not a plan,” Hawken explained to me recently. “It is not a proposal. It is a reflection back to the world what we are doing and know how to do right this second.”

The project grew out of Hawken’s frustration with actionable, scalable solutions that would make a meaningful dent in the atmosphere’s growing accumulation of greenhouse gases. The solutions that had been proffered over the years were all seemingly out of reach — ungodly amounts of solar and wind energy that would be required, for example, or the mass adoption of futuristic, unproven technologies.

“It made me feel like this is intractable, that it requires such Promethean work by such mammoth institutions, with policy changes that are more than structural,” he recalled. “It made me feel like it wasn’t possible to address climate change, rather than giving me hope.”

When the activist Bill McKibben wrote the seminal article, “Global Warming’s Terrifying New Math,” in Rolling Stone in 2012, Hawken asked, “Why aren’t we doing the math on the solutions? Somebody should come up with a list and see what it requires so you get to drawdown.”

The idea of “drawdown” — actually reducing greenhouse gas concentrations so that global temperatures drop — hasn’t been part of the conversation, at least among the United Nations crowd, climate activists or cleantech companies. Most focus on the seemingly pragmatic goal of stabilizing greenhouse gases at some level, expressed in parts per million, or ppm, that would be tolerable — or at least not catastrophic, from economic, environmental and social perspectives.

Hawken thought differently. “There’s no such thing as stabilization at 450 or 550 ppm,” he said. “That’s not stabilized. That’s volatile. I felt that the goal should be drawdown, which is a year-to-year reduction of carbon from the upper atmosphere, period.”

Last year, Hawken began teaching at the Presidio Graduate School, alongside climate activist and entrepreneur Amanda Joy Ravenhill. “One day we were just riffing, and we started talking about drawdown and said, ‘Let’s do it. No one else is doing it,’” Hawken recounted. Today, Ravenhill is Project Drawdown’s executive director and, with Hawken, the book’s co-editor. The two have recruited more than 80 advisors, partners, scientists, government agencies and participating universities, along with more than 200 graduate students.

Hawken and Ravenhill will need that army to pull off their audacious vision. The challenge, as Hawken describes it, isn’t in describing the solutions but in doing the numbers — the carbon savings and financial accounting, of course, but also how each solution plays out by country or region, based on available energy resources, climate, economy and other factors — and how each is likely to morph over the next 30 years.

And not just the positives. “We had to be very, very careful that we had the subtraction sign,” factoring in ways greenhouse gas emissions can increase in the atmosphere along the way, offsetting any reductions. For example, he said, ”We can talk about reforestation as being one of the hundred solutions, which it certainly is, but we have to make sure we subtract out the rate of fires in the world to reflect what’s burning down.” 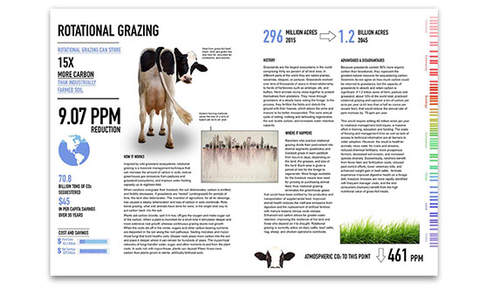 Moreover, he says, technologies can’t be measured in isolation; they need to be viewed as parts of the systems in which they operate. “We can talk about LED bulbs, but we also have to talk about solutions like dynamic skins or smart glass, which actually reduce light load by 40 or 50 percent. Each of these solutions has a history and measurements and metrics and numbers, so we are not pulling rabbits out of a hat.”

And then there’s the problem of double-counting, where individual benefits — energy reductions or financial savings, for example — are counted twice, or even three or four times in a single calculation, inflating a technology’s benefits or understating its costs. That’s been a frequent problem with some clean technology advocates’ rosy scenarios.

The goal, says Hawken, is to make the numbers indisputable. “The numbers wanted to be beyond impeccable in terms of methodology and inputs and even their bias. We wanted to have a very conservative bias on the numbers, so that nobody could say we’re egging the pudding or exaggerating.”

“Doing the numbers” has proved to be as daunting a challenge as Hawken expected, or perhaps more so. The concern over getting it right has led Project Drawdown to push back the book’s publication date, to spring 2016 from the original goal of fall 2015.

True to Hawken’s nature — he’s not likely to be satisfied with simply creating a book, however ambitious and meticulously detailed — Project Drawdown’s plans extend in several directions. The solutions and calculations will be contained in a publicly available database, along with the means for individuals and groups to create customized applications (using APIs, in computer parlance). “Anybody can repurpose it, download it, regionalize it, so they can use the Drawdown solutions to measure progress in any geographically bounded area,” he explained. Users could model solutions differently — for example, factoring in different scenarios of how the cost and efficiency of solar energy might play out over the years. Hawken says there are also plans for accompanying educational curricula developed by National Science Foundation. And possibly some media projects based on the work.

The research could even be used as a policy tool, Hawken says. “What we see again and again is negative cost. We don’t see the opprobrium that is always cast on climate mitigation, which is, ‘It costs too much, costs too much, costs too much.’ We don’t see that at all. We see ‘Return, return, return.’ So governments — whether cities or local or communities or counties or states — can understand that these are no-regrets projects that have a very strong positive return, in which case you would want to do them, regardless of what you think about the rate of change in climate or whether you believe in it at all.”

Despite the long road ahead, Hawken is already looking past the publication of what he dubs “Drawdown 1,” and on to its sequel. That, he promises, will look at the next generation of technologies, with all of their unrealized potential to solve climate change. “We don’t know the ending of this book, make that very clear, but with Drawdown 2, we’re saying, ‘Look what is coming. It is stunning.’”

It’s easy, in today’s divisive and toxic political environment, to view Project Drawdown as too good to be true, a quixotic quest for an unattainable goal.

But there’s something simple and sane about Project Drawdown’s collective ingredients: unabashed optimism tempered by sharp-pencil calculations, a bold goal undergirded by scientific pragmatism, immediacy coupled with a 30-year horizon, all leveraging the wisdom of a very smart crowd.

Not all of it will pan out — there are simply too many variables and uncertainties — but much of it will. And it just could move the needle.

The net-zero backlash has arrived

Settling the score on reusable vs. recyclable cups

Shell and the new era of climate risk