What do Tide laundry detergent, a poster covered in adorable puppies wearing headphones and a baseball hat emblazoned with the cast of Duck Dynasty have in common?

One, they're all sold at Walmart. Two, the grab bag of products are all made by Walmart suppliers included in an initial batch of 150 companies that earned the right to be included in a new "sustainability leader" section of the mega-retailer's growing e-commerce operation. Those suppliers range from consumer products giants like Procter & Gamble and Unilever to smaller businesses like California-based Musco Family Olive Co.

The badge that will denote products sold by Walmart suppliers designated as "sustainability leaders."
"What Walmart is very excited about today is using this tool to inspire a race to the top," Kaplan said. "This is about continuous improvement."

Products receiving the sustainability label aren't necessarily sustainable in and of themselves. Rather, the badges denote suppliers that are taking a broader view of sustainability by integrating organizational changes instead of product-by-product incremental improvements — a reflection of Walmart's own quest to drill down into the most meaningful information in the field.

"The Sustainability Leaders badge does not make representations about the environmental or social impact of an individual product," a Walmart document provided to GreenBiz notes, "only that the manufacturer has scored well enough to earn a badge across all of the products they make in that category."

Evaluating suppliers — especially those operating halfway around the world — is a tricky business for companies looking to delve deeper into the impact that their products have on communities and the environment.

Suppliers are often reluctant to fill out yet another survey on their greenhouse gas emissions, water usage or other relevant metrics, and just figuring out which questions to ask in the first place can be challenging. Even if standards are in place, verifying that corporate ideals are translating to reality is another matter entirely.

Still, supply-chain traceability and transparency is increasingly demanded by businesses looking to mitigate risks — from resource scarcity to conflict materials — as well as consumers growing accustomed to more information than ever about where the products they buy come from and how they are made.

Beyond the intricacies of supply-chain oversight, the move also represents a milestone in both the marketing of green products and Walmart's own positioning in the retail marketplace. Just days after announcing that it would raise wages for U.S. workers, executives from the company suggested that the new sustainability initiative may be another way to re-brand the company's famous low prices.

“Low prices don’t have to come at a high cost to nature and society,” said Walmart VP of Sustainability Manuel Gomez during the webcast announcing the new sustainability leaders program. 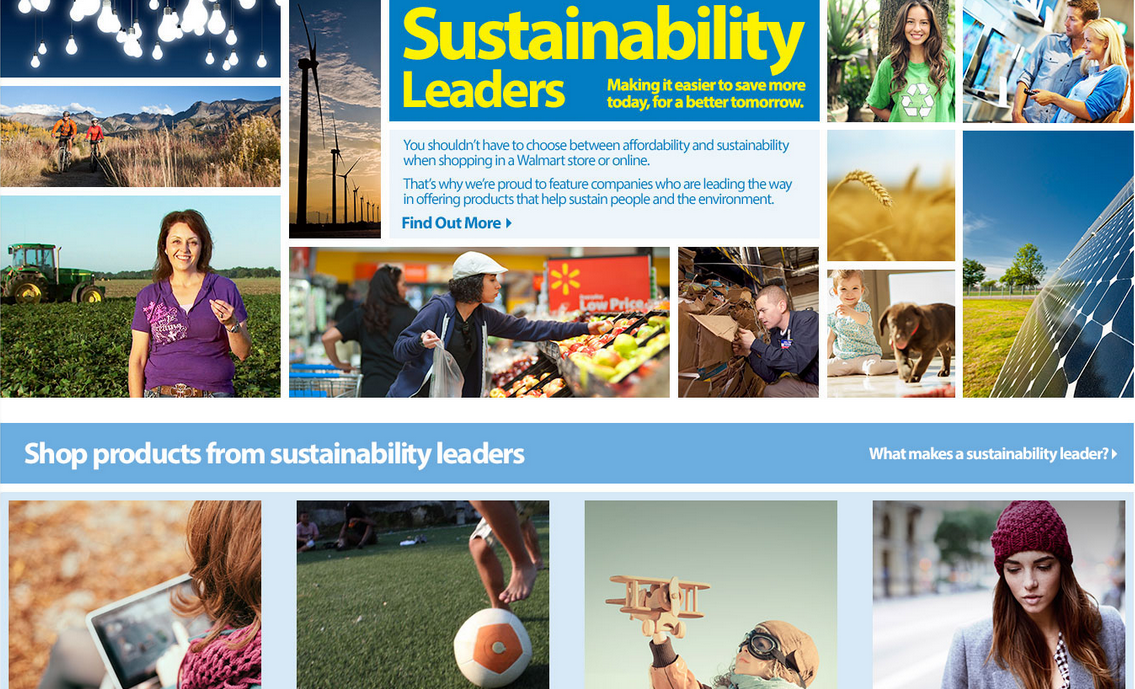 Neil Ashe was talking about the online retail business when he broached the issue of scale at Walmart's Milestone Meeting this week, the first held outside of the retailer's hometown of Bentonville, Ark. But his comments also apply in many ways to the company's sustainability efforts.

“We can solve problems differently than other people because we have scale that others don’t,” explained Ashe, who is Walmart's president and CEO of global e-commerce.

From renewable energy to water conservation to food waste to supply-chain efficiency, Walmart is the corporate embodiment of the idea that one company can have a hugely disproportionate impact on sustainability outcomes.

For instance, by just retrofitting urinals and sinks at U.S. stores with newer water-efficient models, the company with 2 million employees in 27 countries expects to save 1.9 million liters of water per year — per store.

With supply chains, however, while the global potential seems even greater, the specifics remain significantly murkier.

First, consumers still won't know exactly how suppliers are evaluated — a transparency issue that has long been a sticking point for retailers selling organic food or other products in some way differentiated from competing offerings.

Walmart's supplier sustainability index was developed by The Sustainability Consortium (TSC), a sustainability membership group established by Walmart and a group of founding partners in 2009. (TSC was a partner in GreenBiz Group's recent GreenBiz Forum 15.) The organization now counts 100-plus members, ranging from NGOs to academics to some of the world's biggest consumer packaged goods manufacturers, and Walmart remains a Tier One member paying the required $100,000 annual membership dues.

For Walmart's new sustainability leaders shop, the consortium provides instructive high-level overviews of the sustainability challenges embedded in each product supply chain, but does not quantify more detailed sustainability objectives that suppliers are being graded upon, like emissions-reduction targets or acres of deforestation. That's because those metrics are the secret sauce that has resulted from years of research by TSC.

“To make sure that the metrics continually improve, those questions need to evolve," Kaplan said. “As a result of that, those questionnaires are intellectual property that TSC owns.”

Here's an overview of how the supplier evaluation process, which Walmart has now compiled three years worth of data from, works: 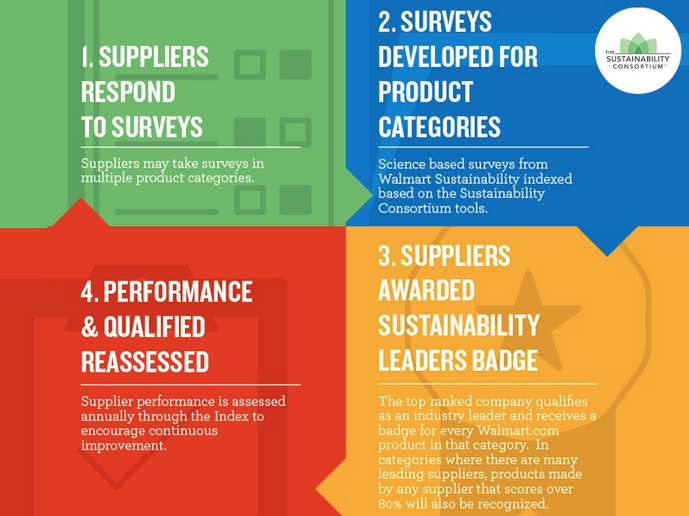 In addition to the fact that the metrics on which suppliers are being evaluated will not be made public, Walmart notes that all information it has collected about the performance of specific employers is similarly "confidential."

The company won't release the scorecard results that merchants complete with suppliers. Instead, Walmart states that in order for products to be labeled as a "sustainability leader," a manufacturer must be ranked highest among its peers within its category. In categories where there are many leading manufacturers, products made by any manufacturer that scores over 80 percent will also qualify for a badge.

Kaplan added that the point of the new sustainability-focused shopping initiative isn't to provide an official certification or audit of supplier standards, but rather to emphasize suppliers working to improve.

“We are not calling this a certification on our end," he said. "We are trying to identify leaders.”

Above and beyond corporate sustainability goals, Walmart's increased emphasis on supplier performance also sheds light on the challenges that come with effectively marketing green products.

The new sustainability leaders shop follows the mold of other online (and in some cases, brick and mortar) labels created by Walmart.

The retailer previously developed programs to highlight products manufactured in the United States, and those sold by women-led businesses, for consumers seeking to vote with their wallet on the companies and issues that they support.

Walmart plans to use the sustainability program to better understand how to  effectively sell products that appeal to a more environmentally conscientious audience. Its e-commerce and sustainability teams will be monitoring data on what sorts of information consumers seek about products, and whether the focus on environmental impacts affects sales numbers.

"We’re really excited about this as a platform for learning," Kaplan said. "These products don’t perform that well when they’re positioned as sustainable in our stores."

7 reasons Walmart has given me hope about green marketing

How the Sustainability Consortium Creates 'Hot Spots' for Innovation

Why Walmart's better supplier scorecard is a big deal