One way to help make rooftop solar affordable for low-income homeowners and renters is to eliminate the labor cost.

That idea was on display on the first day of the GreenBiz VERGE 16 event, when conference-goers took part in a GRID Alternatives installation, topping a modest home nearby with 12 solar panels. Eight VERGE attendees and I donned hard hats and volunteered along with several GRID staff members.

We did the job in one day — and a hot one, at that, with temperatures reaching the mid-80s.

The homeowner worked alongside the other volunteers, hoisting equipment, bolting rails, laying circuitry and finally the panels. The whole crew learned about the nuts and bolts, literally, of installing solar panels. 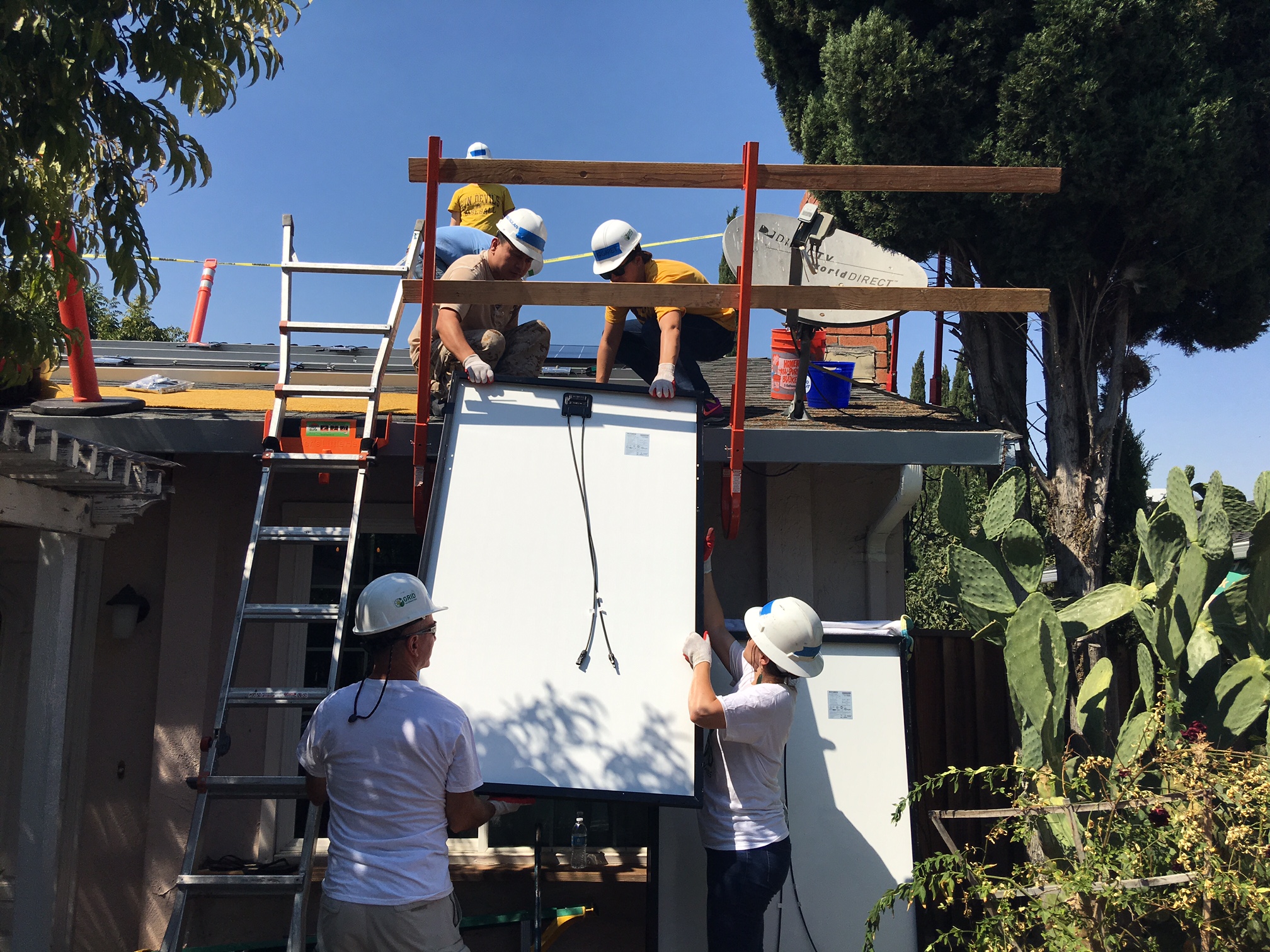 "It’s awesome," Danh Phan said of the new solar arrays on his house in San Jose, California. "They told us we’ll save 50 to 80 percent off our PG&E bill," he said of the savings he was told to expect. Phan normally pays about $150 a month for electricity, so that means his bill could drop to $30.

With a ladder securely fastened to the side of the house, hard hats on heads and buckets of equipment all ready to tote up, the volunteers climbed the ladder to the gently sloping roof. GRID staff had installed some guard rails and drilled the team in safety instructions first: Never walk backwards, don’t sit or stand near the edge of the roof. If something falls from the roof, yell "headache" down below.

The first task was laying the mounts on the roof — three parallel aluminum two-by-fours that would hold the panels. Precise measuring and placement were the key skills here. 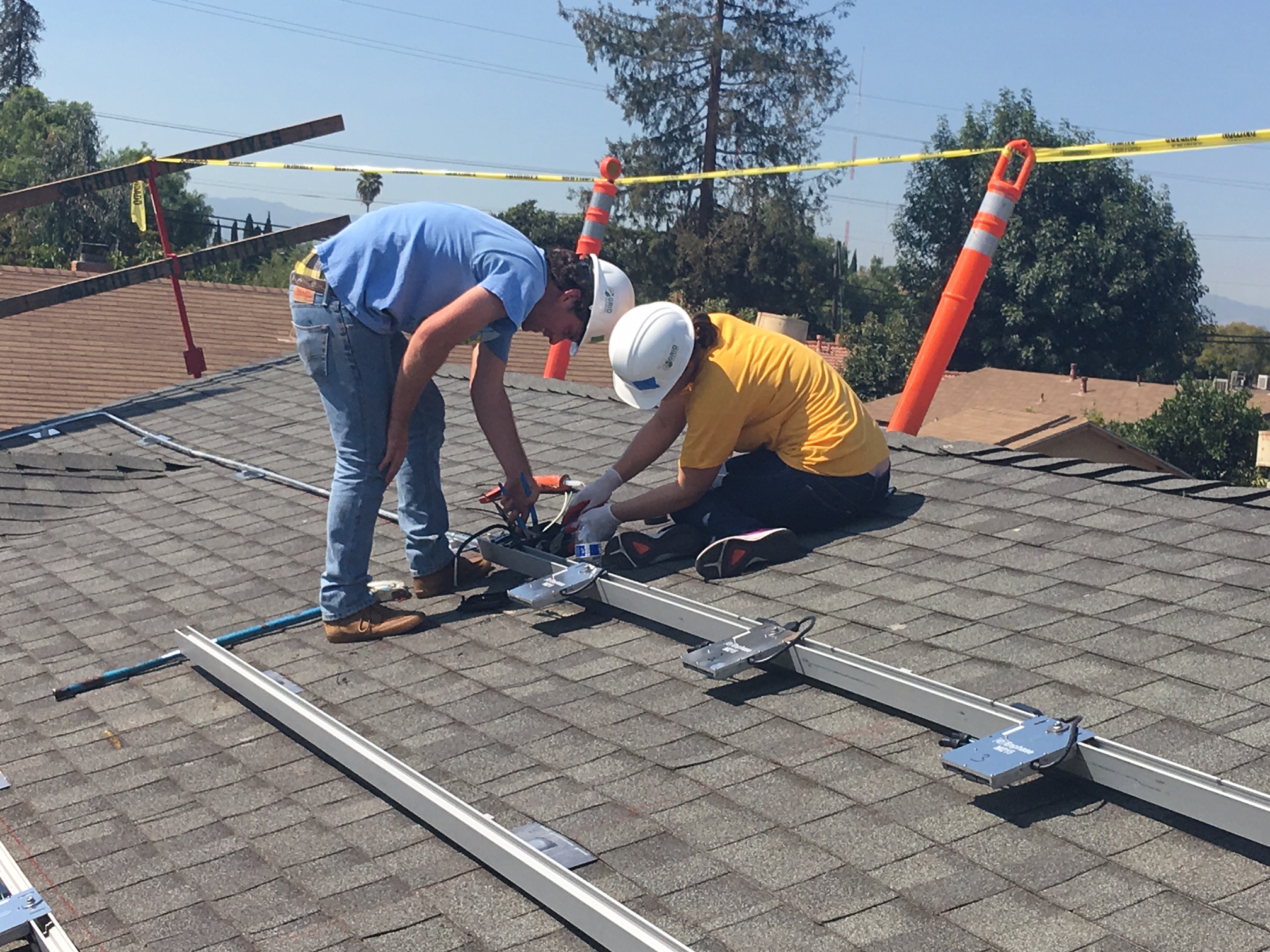 Then came laying the wires, the conduits, along the rails and into an inverter box. An inverter converts the variable direct current (DC) of a photovoltaic solar panel into alternating current (AC), which is what most home appliances and lighting use.

Here it became crucial to have the knowledgeable GRID staff there; most people can’t identify AC or DC among four brightly colored wires.

Once that was sorted out, we threaded the wires through conduits, grounded them with a bolted cylindrical iron ring, stripped the wires' ends, and lastly twisted those ends and capped them in rubber for safety. 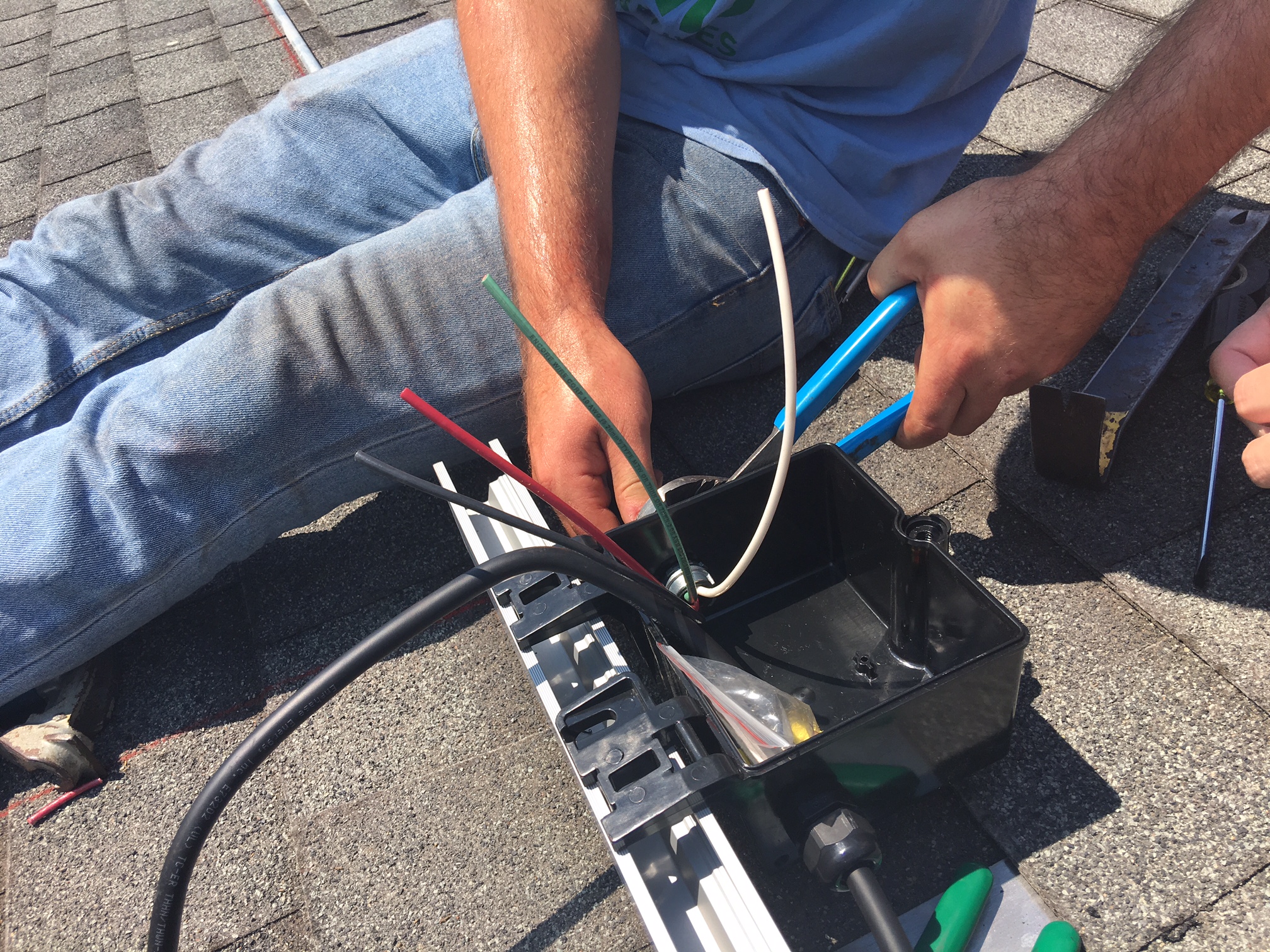 "I’m fascinated by the potential of solar as arguably the best long-term source of renewable energy and I have a flat roof at home, so thought it would be good to learn about solar," said Mark Pezarro, a founder of Earth Voice Strategies, about why he volunteered with the work crew. "I mean, I understand solar energy but I thought it would be best to see what is involved in installation."

Tanya Barham, of the PECI in Portland, Oregon, said, "The last time I did a solar install was about 15 years ago and they didn’t have micro-inverters then."

Nicola Acutt, vice president of sustainability at VMWare, said she wanted to experience a volunteer program that she could bring back to employees at VMWare. "Programs like these are part of our low-carbon future," she added. 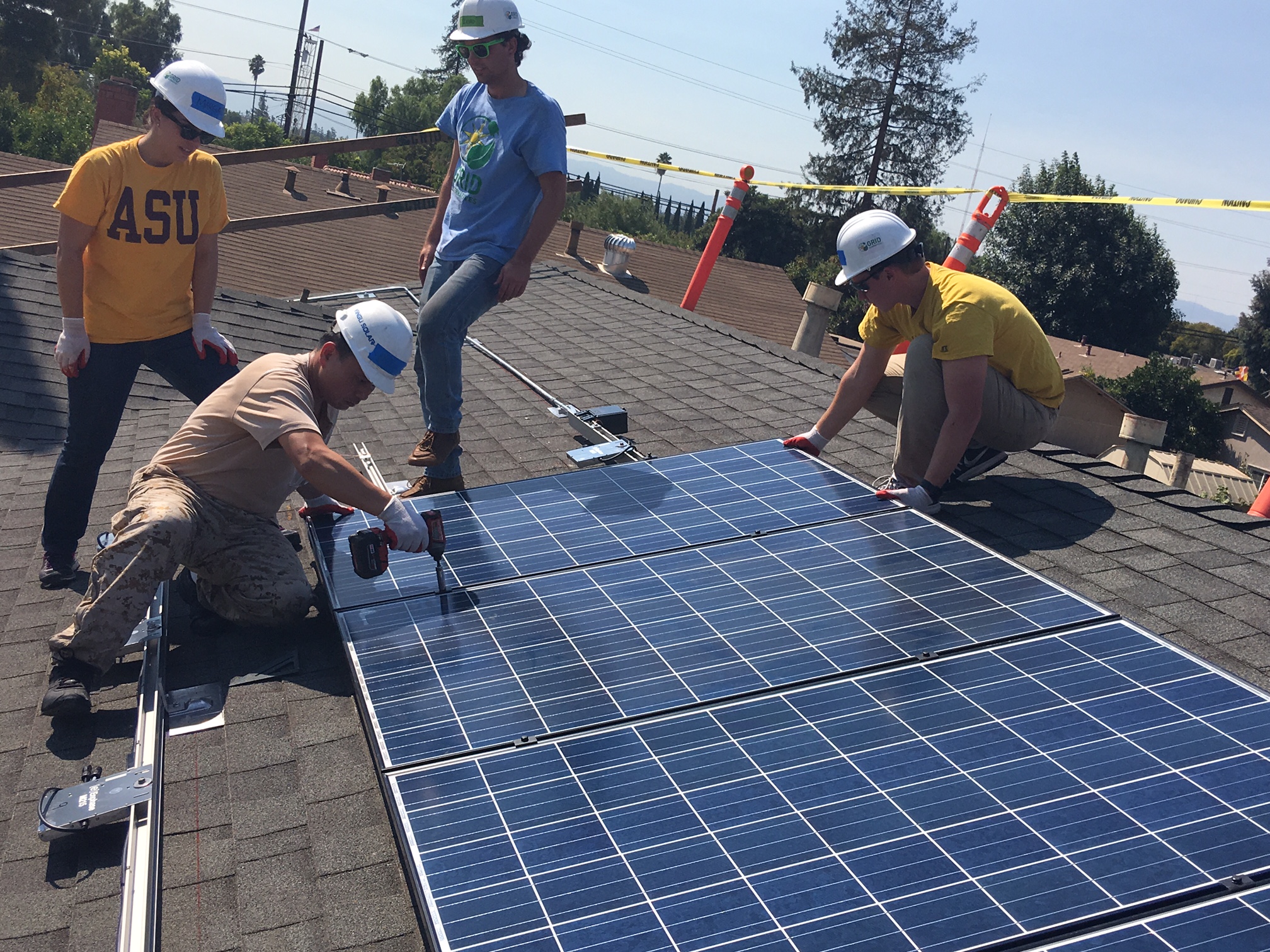 GRID Alternatives has led 7,438 solar photovoltaic installations on homes since its founding 12 years ago. It performs 1,300 residential installations in a single year, mostly in California but also in Colorado, New York, New Jersey, Connecticut and Washington, D.C. It has also done a couple installations on tribal lands.

The nonprofit estimates it has installed 26 megawatts of power, saving homeowners about $207 million on their electricity bills and preventing the emissions of 577,000 tons of greenhouse gases.

"It allows us to train people who might want to go into the industry and it allows us to help people who could not otherwise afford solar," said John Nichols, construction manager for GRID's Bay Area office, about this system.

Nichols said an average cost of an installation with 12 panels would be about $22,000, often upfront. In other leasing situations, the installation costs typically get prorated over the monthly payments.

From the White House down to community-based nonprofits, organizations have been trying to push solar adoption down the income ladder.

That's why solar systems have appeared to be the province of the wealthy. Even as more companies such as SolarCity offer solar leasing with no upfront costs, low-income homeowners and renters have shied away from solar.

Yet from the White House down to community-based nonprofits, organizations have been trying to push solar adoption down the income ladder, with grants and programs. Phan, for one, learned about GRID Alternatives and the possibility of a free solar installation from a community program that conducts energy-efficiency audits.

GRID, for its part, does outreach campaigns with cities, counties and affordable housing programs to recruit homeowners who might be interested and who qualify.

By using volunteers, GRID cuts some labor costs. But given the training and safety precautions, it’s not by any means cutting out all labor; it relies on donors as well as on companies paying GRID to lead their employees in volunteer programs focused on installations.

In exchanging for offering free installations to people who meet certain income qualifications, the homeowners merely need to pay it forward: They become volunteers to install solar panels on a subsequent GRID Alternatives project.