This is the first article in our new column, GreenBiz Evergreen, which brings to light GreenBiz stories from the past that remain relevant today. This story, resurfaced for the close of World Water Week, originally ran August 19, 2015.

In the latest evidence that water shortages and sustainability risks are a bigger deal than many companies are letting on to shareholders, 60 institutional investors managing a combined $2.6 trillion in assets sent a letter today to more than a dozen big food and beverage companies calling on them to reveal water risks.

Failure to mitigate exposure to water scarcity and contamination — and keep shareholders informed of myriad water risks — were other key sticking points.

The letters are not a mere activist play. The Securities & Exchange Commission requires that publicly-traded companies disclose in their annual 10k reports to shareholders any risks that could materially impact finances. The SEC even cites "commodity pricing" as one such possible risk.

Some of these companies have already been stung by the risk. Tyson Foods this summer closed a meat processing plant because cattle growing has been diminished in Texas and other Southwest states.

According to Ceres, U.S. food, beverage and agriculture companies are beginning to mention water in their 10k financial disclosure documents. But many have not broached the subject or discussed what they are going to do about it.

Calvert Investments, a signatory to the letter, said knowing details about how a company is managing risk is central to how it makes investment decisions.

Vice President Stu Dalheim explained in an email, "Calvert asks companies for greater disclosure of water risk because water scarcity can disrupt crop production, raise prices for key commodities and hurt company profitability. Disclosure helps investors understand the risk that individual companies are exposed to, and the extent of company programs to manage that risk."

Dalheim added that urging companies to take stock of their risks also can then compel them to better decision making.

"Disclosure is also often an important catalyst for action. Just as investors can use disclosed information to  make informed decisions about allocating capital to different firms, corporate management should be able to use that same information to better manage their risks exposure," he said.

The increased focus on water risks comes as advocacy groups begin to emphasize often-overlooked water risks alongside carbon emissions risks that for years have gone similarly unscrutinized. A lack of financial incentives for businesses to address either sustainability concern is another strong unifying factor.

An 'extraordinary risk' to food supply

Earlier in the year, Ceres did a study of 37 major food sector companies — spanning the packaged food, beverage, meat and agricultural products industries — and graded them on their water management and disclosure of risks associated with scarcity and contamination.

While numerous companies were given high marks, such as Unilever, Nestle, General Mills, Coca-Cola, Pepsi Co, Bunge and Smithfield Foods, others were found to be doing nearly nothing to manage or mitigate water risk.

It is some of those poorly ranked companies who were called out in the letter from the 60 institutional shareholders. Among the worst are Monster Beverages, Pinnacle Foods, Pilgrim’s Pride, Kraft Heinz and Tyson Foods.

Writing to Dean Foods, which received a middle to poor grade — or 13 compared to Unilever's 70 — the institutional investors said, “Dean Foods may be exposed to a range of physical, regulatory, reputational and community impact risks, which could substantively jeopardize the sector’s short and long-term ability to operate.

"These threats can, and already are having profound near-term business impacts on food and beverage companies that are disrupting operations and supply chains, increasing capital expenditures and operating costs, and constraining revenue growth. "

Dean Foods and others are just receiving the letters today so didn't have a chance yet to comment.

According to the NASA Jet Propulsion Lab in a joint study with University of California at Irvine and the California Institute of Technology, about one-third of Earth’s largest ground water basins or aquifers “are being rapidly depleted by human consumption,” and yet the users have little accurate data about how much water remains in those aquifers.

Using data from NASA's Gravity Recovery and Climate Experiment (GRACE) satellites, they found extreme scarcity conditions in practically every corner of the globe — from India and Pakistan to Africa, the Arabian Peninsula, the Western U.S., Australia, Europe.

“Significant segments of Earth's population are consuming groundwater quickly without knowing when it might run out,” according to NASA.

The most severely stressed aquifers are the Arabian Aquifer in Saudi Arabia, the Indus Aquifer in India and Pakistan, one in northern Africa and the aquifer that feeds California's Central Valley. 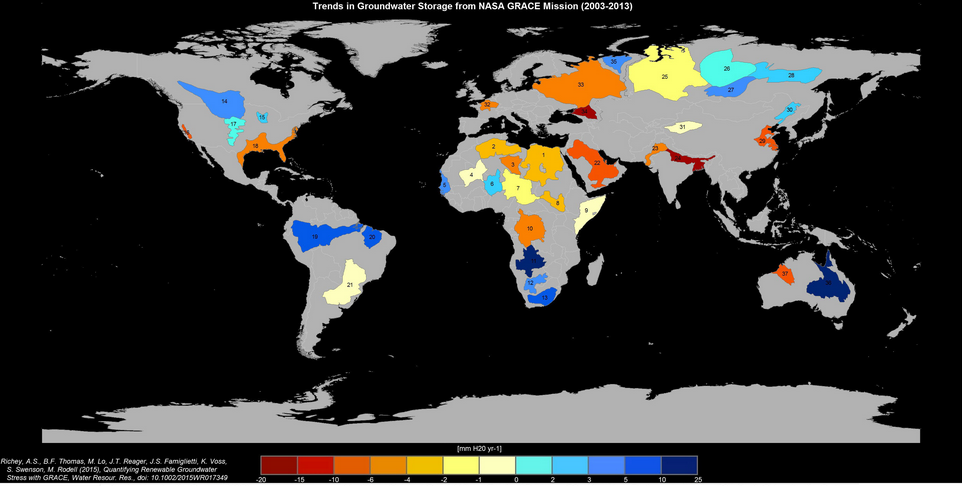 Indeed, in California, which produces more than half of the fruits and vegetables consumed by U.S. residents, farmers are pumping groundwater for the vast majority of their water this year. But even in the technology mecca spawning myriad new water tech ventures, groundwater use is not metered or measured.

In Texas, 41 percent of the state is experiencing drought conditions. As the drought has persisted, it is "raising production costs for many and putting some farmers and ranchers out of business," says the Farm Aid Farmers Resource Network, which has been providing technical and financial assistance to cattle ranchers trying to hold on in drought conditions.