In 1994, my company began a journey toward sustainability that no one would have imagined for us, or for the petroleum-intensive business of carpet manufacturing. It seemed we became the darlings of the business press overnight -- with everyone from Fast Company to Fortune to BusinessWeek to Jane Fonda profiling us and our "unique" point of view on "doing well by doing good."

Today, we've reached a milestone in our journey. We are now 10 years from 2020, our target year for achieving zero footprint. And we are marking the occasion with an event in Washington, where we will be joined by Boeing -- one of our customers and partners -- and the Environmental Protection Agency. We'll be talking about a new commitment we're making to transparency, with a promise to produce Environmental Product Declarations, or EPDs, on 100 percent of our commercial products by 2012. Based on rigorous Life Cycle Assessments, EPDs show it all, "warts" included.

Since the beginning, other companies have wanted to see for themselves what we are doing. For years we hosted those who wanted to come tour our factories, meet our people, marvel at our then very tentative steps towards zero environmental footprint. The invitations to speak came fast and furious, and just four years in, I wrote a book about the transformation that was taking place. I called it Mid-Course Correction, a play on the space-age navigational term for a course correction that is made along the way on a long journey, such as to the moon or Mars.

At some point early on, I likened sustainability to a mountain to climb; a mountain higher than Everest and much harder to scale. Pretty quickly we realized that there wasn't just one path up Mount Sustainability -- there were at least seven faces to climb -- and we'd need to climb them all simultaneously to get to that point at the peak that we imagined as representing zero footprint.

When we started thinking and talking about sustainability, oil was around $18/bbl. The energy crisis of the 70s was a distant memory. The U.S. Green Building Council began organizing, and when I spoke at the 1995 Greenbuild in Big Sky, there were 135 people in the room. Flash-forward to 2010 and some 30,000 are estimated to be coming to Chicago. In business that's a growth curve to die for.

We've made good progress on our mountain climb, some things coming more easily than others. The low hanging fruit was waste elimination, and avoided costs -- money we didn't spend on things we were no longer wasting -- which freed up enough money to fund the R&D, technology, and things like renewable energy and offsets. Altogether, at the end of 2009, we were about 60 percent of the way to zero footprint.

Invitations to share our story -- through speeches or interviews -- continued to come fast and furious, and our story went even more mainstream as we were profiled in the New York Times and on shows like The Weather Channel's Forecast Earth. We began to understand how powerful our influence could be in helping us scale the "eighth" face of the mountain -- the one that goes beyond the peak -- becoming restorative, putting back more than we take, doing good for Earth, not just no harm. So, we created a consulting arm, InterfaceRAISE to formalize the informal peer-to-peer counseling we'd been doing (all of those factory tours and Interface immersion requests).

In 2004, I was invited to speak to CEO Lee Scott's team of direct reports at Wal-Mart. He asked me to talk about the business case for sustainability, to tell my company's story. In the modern vernacular, one could call that a tipping point, a watershed event, as one of the world's largest companies embraced sustainability.

Soon, "green" was becoming mainstream, a crowded field of corporations, governments, academic study, and celebrity endorsement. Today, it's mostly a healthy mix of doing the right thing and good old capitalism in action, in which "natural" capital takes on value along with financial capital. Yet we shouldn't kid ourselves. As a society, we still have a long way to go, because "zero" is hard.

Today, as we begin the final decade of the climb, I wonder: Is the Interface story -- and is our successful rally up Mount Sustainability -- still as relevant as it once was? Does our ability to provide inspiration, instruction, and influence seem less important now that some of the world's biggest corporations are engaged? What will be our legacy?

Whatever it is to be, it will be written by the person most at risk here, frankly at unacceptable risk. Who is that? Not you; not I. Let me introduce you to this person:

I myself met this person in the early days in this mountain climb. On a Tuesday morning in March 1996, I was talking to our people, as I did at every opportunity -- this time in southern California -- trying to bring them along, often not knowing whether I was connecting. But about five days later, back in Atlanta, I received an e‑mail from Glenn Thomas, one of my people in the California meeting. He was sending me an original poem that he had composed after our Tuesday morning together. When I read it, it was one of the most uplifting moments of my life, because it told me, by golly, at least one person had really got it! Here's what Glenn wrote and here's that person most at risk: Please meet:

Tomorrow's Child
Without a name; an unseen face
and knowing not your time nor place
Tomorrow's Child, though yet unborn,
I met you first last Tuesday morn.

A wise friend introduced us two,
and through his sobering point of view
I saw a day that you would see;
A day for you, but not for me.

Knowing you has changed my thinking,
for I never had an inkling
That perhaps the things I do
might someday, somehow, threaten you.

Tomorrow's Child, my daughter-son,
I'm afraid I've just begun
To think of you and of your good,
Though always having known I should.

Begin I will to weigh the cost
of what I squander; what is lost
If ever I forget that you
will someday come to live here too.

Tomorrow's Child cries out for businesses and industries everywhere to join the climb. For there is no more important challenge facing humanity. And the largest, wealthiest, most pervasive institution on Earth must lead, first by correcting its own flawed ways, and then by re-inventing its future. That future must become one of sharing and connecting in transparency and unrelenting commitment to do the right thing for Tomorrow's Child.

Is the Interface story still relevant? I dare to say yes!

Photo courtesy of the author. 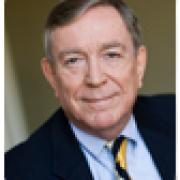 Should Business Have a Conscience?

See all by Ray Anderson