Investors and companies push clean energy to the tipping point

As an ongoing onslaught of federal clean energy and climate policy rollbacks persists inside the Beltway in Washington, D.C., there is an increasing disconnect between the federal political debates on energy and the reality on the ground as clean energy continues to speed ahead across the country. Large corporations are buying more wind and solar power than ever, as investors who understand the economic benefits of clean energy urge companies to take action to realize those benefits.

As the cost of the climate crisis escalates, more investors are recognizing that their fiduciary duties require them to engage in shareholder oversight and engagement on climate risk. A wide range of investor groups, from state pension funds to religious institutions to major philanthropic foundations, are engaging with companies on climate risks and opportunities. Just a few examples:

These engagements are succeeding not only because investors have unique influence with companies they own, but also because a confluence of three factors has made the case for renewable energy very difficult to ignore:

As the cost of the climate crisis escalates, more investors are recognizing that their fiduciary duties require them to engage in shareholder oversight and engagement on climate risk.

So what kind of impact are these corporate commitments having? Last year, corporate energy buyers large and small, from a broad range of industries, signed contracts to build over 6,500 megawatts of new solar and wind facilities across the country, more than doubling the previous annual record. Globally, corporate clean energy contracts totaled over 13,500 MW. To put that in perspective, that’s almost twice as much generating capacity as the Grand Coulee Dam, the largest power plant in the U.S. and more than three times the capacity of Palo Verde, America’s largest nuclear power plant.

And this year? As of the end of May, corporate buyers had signed contracts for over 5,700 MW of renewable energy globally, more than 1,400 MW ahead of last year’s record pace.

Some of the largest U.S. companies are noticing and acting on these factors as never before. Major buyers this year include tech giant Facebook, realty trust and data center company QTS Realty and metal packaging and aerospace company Ball Corp. And as those deals roll in, more companies are taking note. Just in the last few weeks:

Others are setting goals to reduce their greenhouse gas (GHG) emissions, specifying renewable energy as a key tool they will use to achieve those goals:

While this confluence of drivers has powered the growth of corporate clean energy demand into a major force in energy markets, our work is just beginning. According to the U.S. Energy Information Administration, in 2018 renewable energy sources accounted for about 11 percent of total U.S. energy consumption. That is a big shift from a few years ago, and undeniably good news. It is also undeniably insufficient to meet the challenge of climate change.

We need clean energy to not only meet our appetite for energy now but also to power the growing electrification of our transportation system and to rapidly displace existing fossil fuel-fired power plants. That means moving quickly beyond this tipping point to a world powered with 100 percent carbon-free electricity.

This will take more than a strong business case. It will require leadership and ambition, too. Increasingly investors are working together with the leadership of the companies they hold to provide that leadership and help move our energy system towards that world.

And as climate science continues to make abundantly clear, we don’t have a minute to spare.

Winston Vaughn will be speaking on the role of companies as clean energy activists during the upcoming VERGE 19 conference, from Oct. 22 to 24 in Oakland, California. 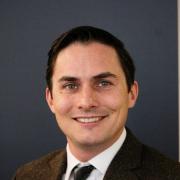 See all by Winston Vaughan