Ten months into the Trump administration, private-sector investors are still waiting for clarity on how exactly the feds expect to stimulate $1 trillion in infrastructure spending.

But the prospect for public-private partnerships to finance sustainable transportation roadmaps, water management system and other projects loomed large last week among experts at the Goldman Sachs Sustainable Finance Innovation forum. Even if federal participation isn't forthcoming, the attendees said, the opportunity is ripe to support improvements to U.S. roads, bridges, airports and water systems. And these projects won't happen without significant participation from the private sector, they noted.

"The United States is the biggest emerging market in the world for infrastructure," said Andrew Marino, managing director and co-head of the Carlyle Global Infrastructure Opportunity Fund, during a conference session devoted to this topic.

As a nation, one of our biggest challenges is the chronic underinvestment in transportation.

While he holds out little hope that the current administration will follow through with catalytic funding, Marino said state and local governments are studying projects that offer better services and "outcomes" for their citizens more closely than ever.

Corporate investors are looking for that sort of engagement to inspire their own participation, suggested Sue Siegel, chief innovation officer for General Electric and chief executive of the giant company's venture capital arm, during another panel discussion.

The GE team, for example, is more inclined to support funding a startup if its backers also include "stacks" of backing from government sources (such as grants), traditional venture partnerships and social entrepreneurs looking to make an impact, Siegel said.

Without clear federal leadership, states and cities must focus more closely on prioritizing regional needs rather than the pet project of just one state or city in order to make these investments more sustainable for the next generation, noted Anthony Foxx, former U.S. Secretary of Transportation and mayor of Charlotte, North Carolina, during a session about U.S. policy and politics.

"As a nation, one of our biggest challenges is the chronic underinvestment in transportation," Foxx said. "As demographics change, as the population grows in the south and west, the challenge is how to create multimodal systems; and in the northeast, a massive update is required."

For an example of how partisan bickering can delay or hinder a project, consider the ongoing fight over repairing and replacing the tunnel system connecting New Jersey and New York City under the Hudson River. The strain on the existing network, and Penn Station, is reaching a breaking point. The fate of the so-called Gateway plan is up in the air again, and it's not clear whether the Trump administration will find the federal funding promised under President Barack Obama.

So, it's up to states and cities to focus more on taking matters into their own hands, argued Jason Grumet, president of the Bipartisan Policy Center. "If you have regional buy-in, it will make it easier for the federal government to at least support that experiment," he said.

Added Foxx: "Most cities sit in a regional ring, and planning decisions should be made on a mega-region basis, not a city-by-city basic."

Get ready for 'Urban Planning 2.0'

Evidence of interest in the regional approach to infrastructure planning and investment can be found in both the United States and Canada, as well as in fast-growing emerging economies such as India, based on several examples cited by panelists at the Goldman Sachs forum.

For inspiration, one might study the sewage and water treatment system planned to support industrial corridor being developed between Delhi (one of the world's most populous cities) and India's coastal capital Mumbai. The region is considering projects across the corridor holistically so that smaller metropolitan areas can pick up the services without having to duplicate investment, said Steve Johnson, senior vice president for water infrastructure with development firm AECOM. Similarly, he pointed to the United Kingdom's regional system of privately owned water utilities as worth evaluation along with radical upgrades in Hong Kong. 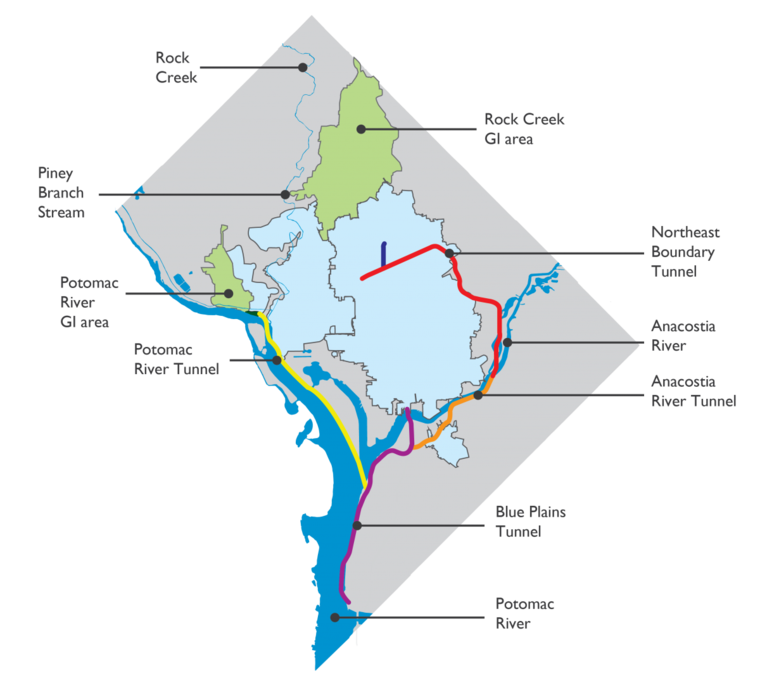 DC Water
<p><span>The Clean Rivers System for Anacostia and Potomac Rivers, and Rock Creek.</span></p>
Another place to look is Washington, D.C., home to what is considered the first tax-exempt environmental impact bond in the United States. The $25 million placement by the Goldman Sachs Urban Investment Group and the Calvert Foundation will be used by DC Water for a $2.6 billion program (called the DC Clean Rivers Project) to improve storm water runoff and improve water quality through the use of natural infrastructure.

"This work is critical for residents in our hometown and has national implications for how to finance green infrastructure solutions to combat the effects of extreme weather on aged, vulnerable sewer systems," said Beth Bafford, investments director for Calvert Foundation, when the deal was disclosed in late 2016.

This financing mechanism — and others like it — could be used for financing coastland wetland restoration projects meant to reduce urban flooding. At least 50 U.S. cities are nearing a crossroads at which they must choose their path for next-generation water infrastructure investments, Johnson suggested. The situation in Pittsburgh offers another object lesson: The city desperately needs to replace its lead-lined pipes but can't afford this without raising rates or finding a well-heeled partner. That scenario could inspire the city to ally with more than 80 nearby communities to study a co-investment approach.

The matter of "ownership," however, is likely to be a sticking point — a theme that arose often during the day's discussions. And the need to create vehicles for assessing the impact of these projects will be crucial. "There is a tremendous amount of reputational risk for those who don't follow through," said Michael Rowan, managing director of global public, project and infrastructure finance for Moody's Investor Service.

But for now, at least, the notion of what makes for a successful investment is very much open to interpretation.