Is IoT the missing ingredient for tackling food waste?

Emerson might not be a household name, but its Insinkerator line of garbage disposals helped the $22.3 billion corporation earn status as the world’s largest provider of equipment for handling food waste.

About two years ago, the St. Louis, Missouri-based technology company moved to address the issue in a larger way — with a service called Grind2Energy that prepares kitchen scraps, grease and leftover food to be turned into biogas and other organic substances, such as fertilizer, at an offsite facility.

So far, Emerson has signed up a smattering of high-profile accounts like Whole Foods and Cleveland’s football stadium and convention center — supermarkets, casinos, and hospitality firms are among the early adopters, using the system as an alternative to traditional composting programs. The company in September won a Whole Foods "Green Supplier" award for the North Atlantic region, where it helped just one location cut the equivalent of 2.5 million automobile miles in greenhouse gas emissions while producing more than 220,000 pounds of nutrient-rich fertilizer. As of that time, Whole Foods was using 10 of the systems.

Right now, the waste management people are completing their routes, whether or not they need to do so.

In aggregate, Emerson’s customers have diverted about 7,400 tons of food waste from landfills. Now, the company hopes to make its food recycling story far more compelling with new sensors and wireless connections announced in early January by AT&T that will connect its systems to the internet.

The data collected and shared through that technology will help Emerson customers by offering insights that could help them address habits that cause waste, said Tim Ferry, group vice president for Emerson Commercial and Residential Solutions. "This makes for a much smarter system, offering diagnostics and maintenance tips for optimizing uptime," he said.

The IoT hookup also will help ensure that collection bins are emptied more proactively when they’re full, Ferry added. "Right now, there’s a lag and a lot of manual intervention."

The food waste problem is well-documented and largely unaddressed. Some research suggests that up to one-third of food produced for human consumption goes uneaten, at a cost of at least $940 billion annually. In the United States, the problem is even worse — federal data pegs waste around 40 percent, with 90 percent of that going into landfills where it produces harmful methane gas.

The Grind2Energy approach is intriguing because it approaches the food waste issue through the lens of other operational concerns associated with commercial conditions, such as identifying wasteful habits and fixing equipment before it breaks. It could, for example, result in a significant reduction of tipping fees associated with composting or more traditional forms of food disposal. The systems already collect data about the machines, including maintenance metrics. But that information has to be downloaded manually during on-site service visits.

"Right now, the waste management people are completing their routes, whether or not they need to do so," said Mike Troiano, vice president of the IoT business for AT&T. Aside from providing the network that helps the Emerson systems communicate data, the huge wireless company played a role in developing a cloud-hosted app and analytics dashboard for the equipment, he said.

Emerson’s Ferry declined to say when IoT-enabled editions of the Grind2Energy systems will reach the market, saying details are still being worked out for a launch in the near future — including how to retrofit the equipment that’s already in the field. But he said there’s a backlog of interest in the current technology.

Not the only game in town

IoT technology is one of the secret sauces behind a competitive food waste recovery system sold by WISErg, a seven-year-old company in Redmond, Washington, founded by two former Microsoft engineers. Their system, the Harvester, uses an oxidative conversion process to break down food scraps and turn them into a liquid that can be used to create fertilizer.

Actually, that’s more of the business model here. The systems are a means to an end: providing the company with feedstock. 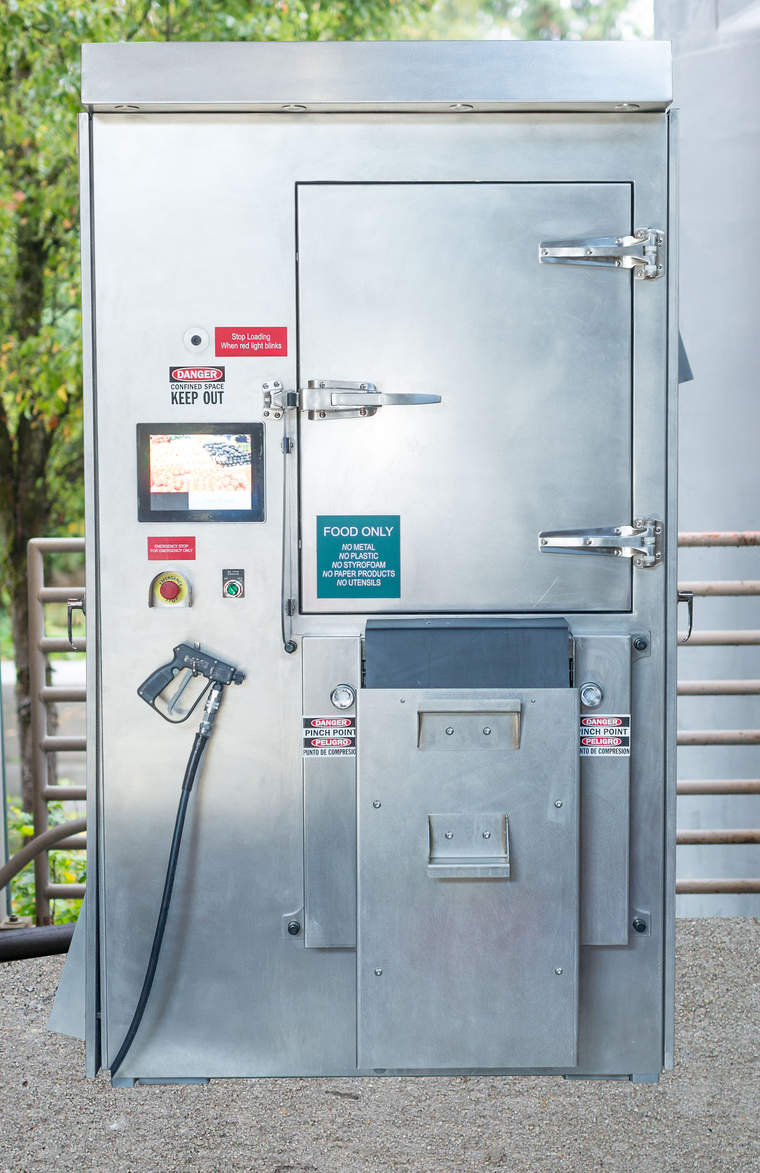 WISErg
<p>The Harvester prepares food waste, including produce, meats and bones, so that it can be turned into fertilizer for organic gardens and farming operations.</p>

WISErg started out in the Seattle area, where it has relationships with a number of organic groceries including Whole Foods and Costco. The "slurry" that it collects in those locations is processed at a local plant and sold mostly to large farms. Collection is handled regionally, while the fertilizer is sold nationally, said Robin Sweere, WISErg’s national account executive.

Right now, the company’s Washington state processing plant is the only one it's running; however, WISErg is mulling an expansion into California, which supports a ban on sending food waste to landfills, Sweere said.

Since it first began installing the Harvester about two years ago, WISErg has used the data collected by its systems — which it maintains — to refine the amount of water and electricity that’s used to break down different organic materials. For example, discarded produce requires far less water and grind time than bones from a grocery’s butcher department or delicatessen.