IT Industry Gets a D+ for Green Policy, Labor Practices

With the exception of Ricoh, Intel and Motorola Mobility, the IT industry earns dismal grades when it comes to sustainability and social practices, averaging about a D+, Oekom Research AG says in a new report.

Office equipment maker Ricoh of Japan and chip producer Intel in the U.S. each earned a B+, the highest grade, and cell phone manufacturer Motorola Mobility earned a B, in Oekom's analysis.

Oekom, a ratings firm that specializes in sustainable investment, looked at 205 companies in its review. Here's a chart showing the range of grades earned: 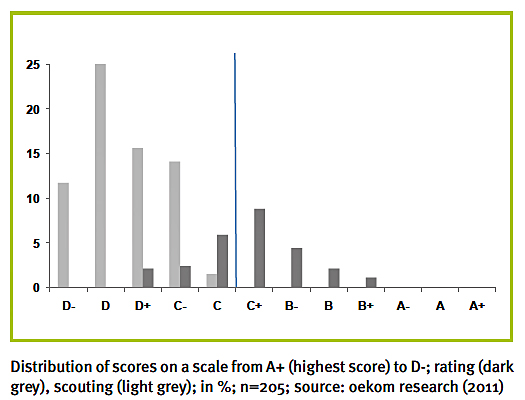 Oekom's summary of its analysis didn't disclose the grades earned by other firms, but it did provide a snapshot of certain findings. For example, the review considered whether firms incorporate used equipment and recycled material into new products and rated the companies on a scale of 0 to 100, with 100 being the best score.

Ricoh again rose to the top of the list, along with Konica Minolta and NEC, each scoring 100. Hewlett-Packard received a score of 50; Apple 0. Here is a chart showing a sampling of the scores: 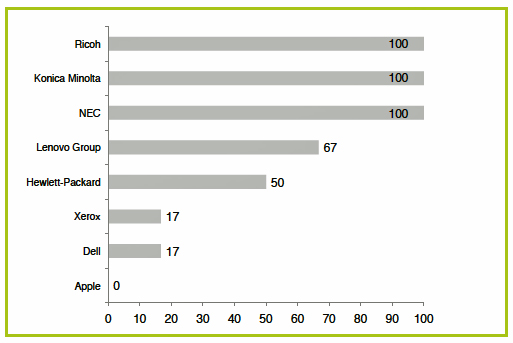 Oekom also examined working conditions in the supply chain for the IT industry as more manufacturers are outsourcing production to meet the challenges of increasing competition, burgeoning demand for consumer electronics, and pressure to drive down costs.

That shift has created much-needed jobs in emerging markets, but it has also led to violations of international labor rights, according to Oekom. The alleged violations include breaches of laws that are intended to proscribe child labor, discrimination and unacceptable working conditions.

A paper on labor conditions in a number of industries, which Oekom published as a companion piece to the IT industry analysis, found:

The manufacturers of mobile phones and computers rank among the worst of the sectors which violate internationally recognized labor rights. Over 42 percent of the companies in each of these sectors which have been rated by Oekom Research have committed this kind of violation.

In contrast, the paper noted, the labor-intensive and often criticized textile industry had a lower incident rate of violations. Here is a chart showing labor violations by industry sector: 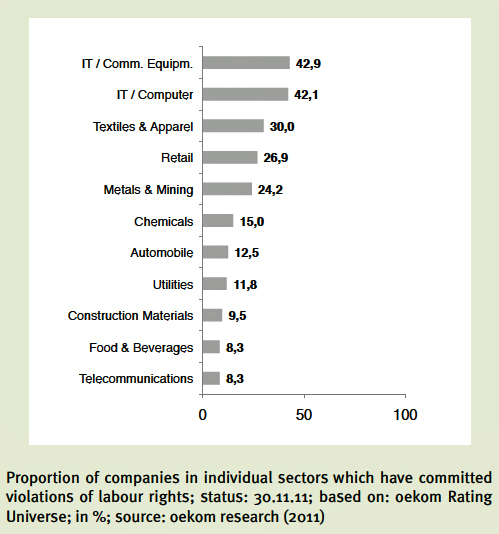 Scrutiny of industry practices has promoted several companies to increase efforts to be better corporate citizens. Measures being taken include monitoring of suppliers and manufacturing sites and conducting on-site audits, Oekom said.

Most of the companies reviewed by Oekom have tried to reduce the amount of hazardous substances -- such as toxic flame retardants, PVC and plasticizers -- used in their goods. Some of firms have exceeded requirements in Europe and China, according to Oekom.

However, Oekom analyst Philipp Rühle observed in a statement:

"It will not be possible to resolve overnight the difficulties the large brand manufacturers face in ensuring compliance with their social minimum requirements in the supply chain. It will therefore be some time before interested consumers are able to purchase genuine sustainable IT products."

Photo of electronics store via Shutterstock.com. Charts courtesy of Oekom.