There have already been more shareholder resolutions related to environmental and social issues filed this year than in 2016, according to an annual review of proxy statements.

Amid unprecedented uncertainty about the Trump administration's commitment to environmental and social issues, investors are relying more heavily than ever on companies to take action on initiatives such as addressing climate change, conserving water or reducing waste.

So far in 2017, shareholder resolutions specifically related to social and environmental issues have increased to 430 from 370 resolutions last year, according to Proxy Preview, a joint publication of As You Sow, the Sustainable Investments Institute and Proxy Impact.

According to the report, resolutions related to climate change and political activity underlie much of the shareholder activist sentiment thus far in 2017. Overall, environmental policies were the subject of 26 percent of the proposals filed, while corporate disclosures related to political activity accounted for 21 percent of the proposals filed. Suggestions related to human rights (18 percent), sustainability programs (12 percent) and diversity (11 percent) rounded out the top five.

The Proxy Preview provides an overview of environmental, social and sustainable governance resolutions filed in 2017 in preparation for "proxy season," when shareholders of public companies vote on new boards and a range of issues during annual meetings.

"Many companies, especially leaders on environmental and social issues and good corporate governance, are not leaping to end transparency, halt engagements and block shareholder input," said As You Sow CEO Andrew Behar in the report. "Instead, they look to investor advocates to uncover win-win situations that benefit all stakeholders."

The Proxy Preview comes in preparation of "proxy season," which runs from April to June when 90 percent of all U.S. annual meetings occur and nearly all shareholder resolution voting happens. 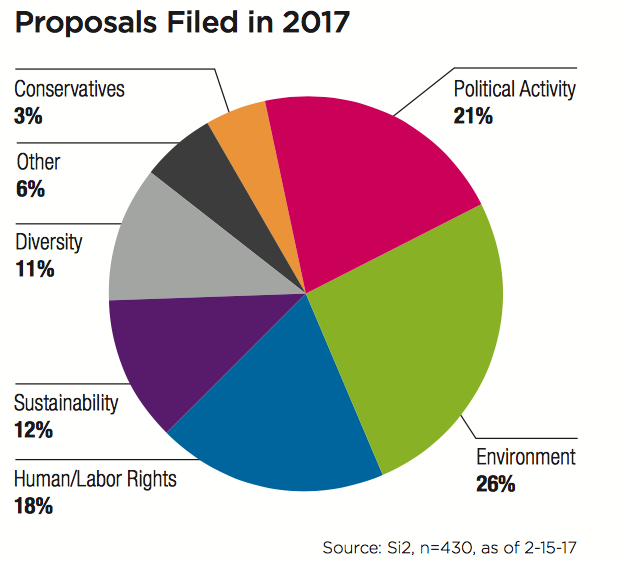 While there is an increase this year in total resolutions relating to environmental issues, resolutions specifically dealing with climate change dropped to 82 from 94 in 2016, according to the report.

The Proxy Preview mentioned, however, that climate change resolutions often show as part of other proposals including sustainability reporting, executive compensation and board oversight and composition.

At this point in 2017, 18 specific climate change resolutions ask companies to address how changes in technology and government regulation will affect their generation of electricity or their energy product offerings.

Not suprisingly, many of these resolutions were specifically directed at utilities including AES, Ameren, Dominion Resources, DTE Energy, Duke Energy, PNM Resources and Xcel Energy.

While many shareholder resolutions related to environmental, social and governance policies fail to attract majority support, they nonetheless can improve a company’s attention to and performance on that issue.

The proposals ask that each company publish an assessment of the long-term impacts on their portfolio as well as catalog technological advances that may pertain to limiting global warming to 2 degrees Celsius.

Another area that’s been a particular focus of shareholder activists this year has been packaging.

In 2017, As You Sow submitted a shareholder proposal for Amazon.com and Target to issue a report about the environmental impacts of foam packing materials. This included "quantifying the amount that could reach the environment, the potential for increased risk of adverse health effects to marine animals and humans."

A similar proposal was made to McDonald’s, which has swapped "polystyrene foam beverage cups" for "foam packing."

Looking beyond environmental proposals, the Proxy Preview found that investors have filed more proposals than ever involving the diversity of boards of director members — 29 so far.

At Costco, NorthStar Asset Management’s shareholder resolution asked about the link between the board of directors and its reflection of the demographics of company stakeholders.

Boston-based non-profit Oxfam America submitted a resolution (PDF) to Tyson Foods about the link between working conditions and board diversity, which only received about 2 percent of support. 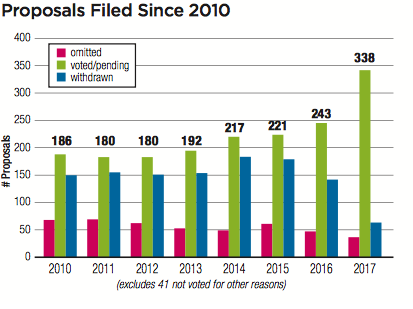 A rise in investor activism

Shareholder resolutions, also known as shareholder proposals, are part of a larger trend of shareholder activism in ESG issues.

A recent study by Harvard University found that about 40 percent of shareholder proposals on the Russell 3000, an index that is a benchmark for the entire U.S stock market, are related to ESG issues, a 60 percent increase since 2003.

While the study found that most of these ESG proposals fail to receive majority support, it also found that these resolutions nonetheless can improve a company’s attention and performance on the ESG issue in question.

As You Sow said on its website that it uses resolutions as a way to leverage the power of stock ownership in publicly traded companies to promote environmental, social and governance change from within.

Resolutions are placed on the company’s proxy, and any shareholder owning at least 1 percent, or $2,000 worth of stock, for at least a year is allowed to bring up a shareholder proposal.