The impacts of extreme weather events and natural disasters are felt for more years than most people think.

The 2012 hurricane widely known as Superstorm Sandy left at least an estimated 325,000 New Jersey homes (PDF) damaged or destroyed. Nearly seven years later, many New Jersey residents who have not fully recovered have to fend for themselves.

The government funding has mostly dried up. Only two nonprofits that help survivors remain engaged.

If you visit almost any town in coastal New Jersey and drive inland from the beaches, you will see houses that look fine from the outside. But even today, you’d see something else if you take a closer look.

Some homes are elevated 10 feet above-ground to prevent flooding — yet lack stairs. Others may remain disconnected from the electric grid. If you were to peek inside, you might find they have no furniture or appliances or even walls — just studs and crossbeams. In some cases, whole apartment buildings have vanished and are not being rebuilt.

I’m a researcher who studies how organizations and agencies team up to solve big public challenges. While researching the recovery efforts (PDF) after Sandy, I have found that up to a third of the 2.5 million people who live in Keansburg, Belmar, Toms River and other places along the New Jersey coastline and back bays struck by the storm had not fully recovered from this disaster by October 2017 — five years later. Today, almost seven years after the storm, a lack of data and the patchwork of assistance programs make it difficult to fully assess what remains to be done.

This failure to help families get completely back on their feet is partly due to shortfalls in funding from charitable and federal sources. Another reason for this incomplete recovery could be turnover: The organizations that team up to carry out long-term efforts often change, causing delays in rebuilding and confusion over where to turn for help.

Hurricanes, tornadoes and other disasters wreak a lot of damage. The total tab has averaged $150 billion per year since 2014.

Charities such as The Salvation Army and Brethren Disaster Ministries usually deliver one of the first waves of help. Before the emergency responders have left the scene, many Americans are chipping in after big disasters, volunteering their time and donating money and emergency items to churches and nonprofits that assist on the ground. Three in 10 U.S. households, for example, supported efforts to address disasters in 2017 and 2018.

While this aid can quickly bring some relief at a vulnerable time, it falls far short of what’s needed for individuals and communities to rebuild.

Americans who do donate typically give within the first few weeks of a disaster — then stop. In 2017, for example, only 2 percent of U.S. households supported efforts to deal with disasters that happened before that year. But recovering from big emergencies can take five years or longer. 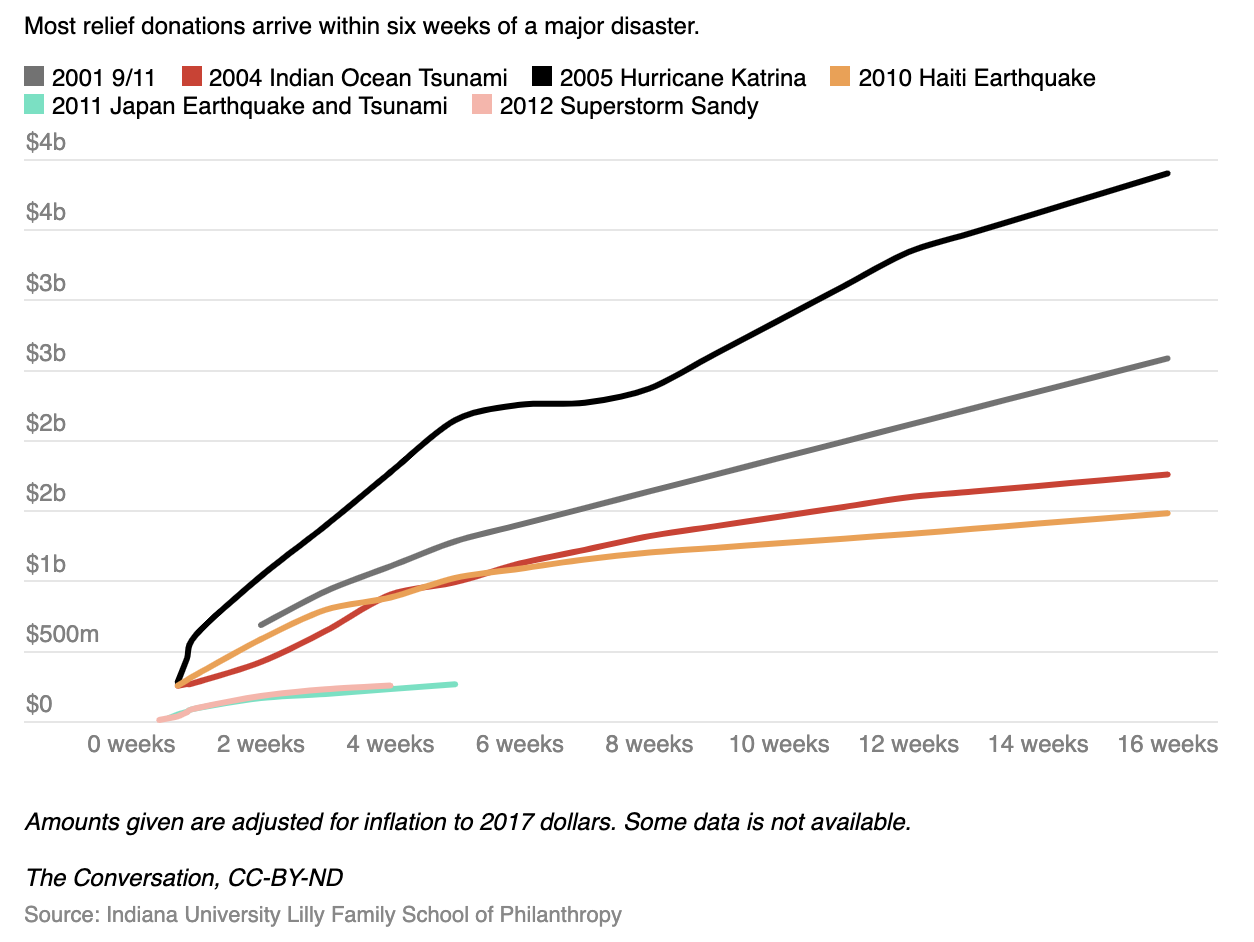 Foundations, corporations and the like (PDF) play big roles in assisting the people and communities hurt by disasters. After Sandy, they contributed $328.4 million towards recovery efforts between October 2012 and June 2014. Of this aid, $67.1 million was for efforts in New Jersey, with the reminder going to states such as New York and Connecticut.

But even this support ended long before everyone’s needs were addressed. Although New Jersey food pantries continued to provide Sandy survivors over 2,000 meals early in 2014, for example, mental health services grants and temporary housing programs designated for people who were experiencing prolonged hardships were phasing out within 20 months of the storm.

In 2018, six years after the storm, 1,200 of the 8,300 families in the main New Jersey state program had not finished rebuilding their homes.

Americans who only give right after disasters may figure the federal government will handle everything later on. That’s not the case.

The money the federal authorities spend comes from sporadically passed emergency funding bills. This arrangement means urgent spending gets lumped together with money to address long-term recovery needs. Families who have not returned home or completed repairs years after disasters upended their lives may be competing for dollars with families who have no housing after the most recent hurricane, flood or wildfire.

What’s more, disaster spending bills are turning into a mechanism for addressing the economic distress brought about by the Trump administration’s trade policies and a vehicle for political bickering.

All told, FEMA gave New Jersey and New York homeowners $1.4 billion in direct assistance within five years of Sandy. Nearly all — $1.2 billion — of this was for housing, including temporary housing in motels, rental apartments or old military bases for residents whose homes had become uninhabitable prior to repairs or replacement.

While that may sound generous, those expenditures covered a tiny fraction of the $36.8 billion in damage Sandy caused in New Jersey — more than half of the total $71 billion the storm caused in two dozen states.

Homeowners don’t complete their repairs or finish rebuilding in a timely fashion for a number of reasons. They may have to contend with fraudulent contractors or have the government deny their flood insurance claims and use up time filing appeals, among other things.

But the primary state-sponsored reconstruction program open to households earning less than $250,000 per year only assisted 8,300 Sandy-impacted New Jersey homeowners. In contrast, 61,441 people and households (PDF) had been approved for federal housing and disaster assistance programs.

Unfortunately, no one has carried out an accurate census of where displaced homeowners and renters wound up. Some are living with relatives, some are in rentals, and some have moved away. A general lack of common data and unified disaster recovery metrics makes assessing recovery efforts hard if not impossible. 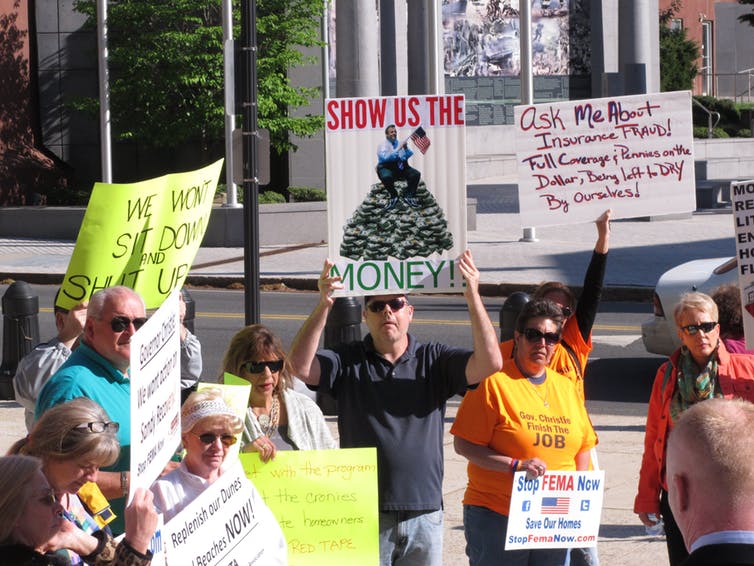 I have found that these organizational partnerships, known as recovery networks, change all the time.

A total of 178 organizations were handling Sandy recovery efforts in early 2013, less than three months after the storm. By 2017 only four of them were still helping out. By the six-year mark, just three kept going. Through my work, I found that only two nonprofits in New Jersey were still making this work a high priority in 2019.

I found that the final organizations still active by 2017 chose to work together because their goals, commitments, values and working styles were very similar. As disasters can leave people feeling isolated, abandoned and alone, it was helpful for Sandy survivors to be able to turn to a consistent group of people and organizations familiar with their cases and communities.

These recovery networks make it easier to get the paperwork right and to keep up with constantly changing requirements of various bureaucracies.

See all by Jack L. Harris