Is it time to retune our mindsets?

A mindset is a damn fine thing, humming away in the back of each of our brains, channeling realities, dialing up certain wavelengths — and tuning out frequencies that could drown us in background noise. But equally, poorly tuned mindsets can endanger our grip on reality, overwhelming our senses with static.

Once in place, mindsets are hard to reboot in any one individual, although normal service can be disrupted by stress, breakdowns or drugs. But every so often — as when our TVs shifted from analog to digital broadcasting — it is our collective mindset that needs retuning.

And that’s where we find ourselves today, as I was reminded during a particularly challenging Cambridge Union debate in October. The union is the world’s oldest debating society — and the largest student body at Cambridge University — with the motto "Defending Free Debate Since 1815." In that spirit, whether as proponents or opponents, eight of us were in town to debate the motion: "This House Would Rather Cool Down the Planet than Warm Up the Economy."

Dame Fiona Reynolds, who once ran Britain’s National Trust and is now Master of Emmanuel College, opened the case for cooling the planet. She had expressed surprise to find that I would be leading off for the opposite side, but, as I promptly argued, the motion itself posed a false dichotomy. It assumed that the answer was either/or, reflecting an outdated, linear and polarized mindset.

My argument was that we have to engineer a furious spurt of economic growth, but of a very different nature. Indeed, the U.K. government has just launched its clean growth strategy, encouraging business and investors to squeeze down what it calls the "emissions intensity ratio" of growth, boosting what we call carbon productivity.

My argument was that we have to engineer a furious spurt of economic growth, but of a very different nature.

Shortly before the debate, I learned that all three of my co-panellists were climate skeptics. When I warned them that I wasn’t, they asked me to go first. In doing so, I posed the question whether it matters if people do the right thing (for example, encouraging growth to meet the needs of society) for the wrong reasons (because they think the climate risks are negligible).

My conclusion: The mindset with which we approach such challenges is crucial.

Then I think I surprised everyone by saying that the audience should listen very carefully to whether — and if so, how — my co-panelists explained the link between the need for growth and for a radical decarbonization of the economy. If the link was not properly made, I suggested, the audience should vote for our opponents.

The skeptics fell headlong into the trap, arguing for growth with little if any thought for the climate. The eventual vote — after I had left to head back to London — went as I expected. "We lost big-time," one co-panelist reported: indeed, the vote went 95 percent to 5 percent against our team. Interestingly, though, a significant number of participants spoke in favor of abstention, picking up on my point that we were being asked to make a false choice.

When I got home, I found a courier had delivered a large package containing copies of the 30th-anniversary edition of a book I had co-authored in 1987. This was "Green Pages: The Business of Saving the World," published in 1988, the same year that we launched our million-selling "Green Consumer Guide."

Three things struck me in re-reading "Green Pages." First, it talked about climate change, clean technology, socially responsible investing and green growth market opportunities in ways that are readily recognizable today. Second, we have seen a generational change in the sustainability movement: of the 50 authors featured, around a third are now dead — among them, Green Party activist Petra Kelly, shot by her lover Gert Bastian. But, third, it is striking how much has also changed in the wider world.

The book contains telephone numbers for organizations, for example, not websites. The internet surfaced six years later. And there was no hint of the impending fall of the Berlin Wall, nor of the waves of globalization, liberalization, privatization and neo-liberalism that would follow. So what, in like manner, are we missing today? 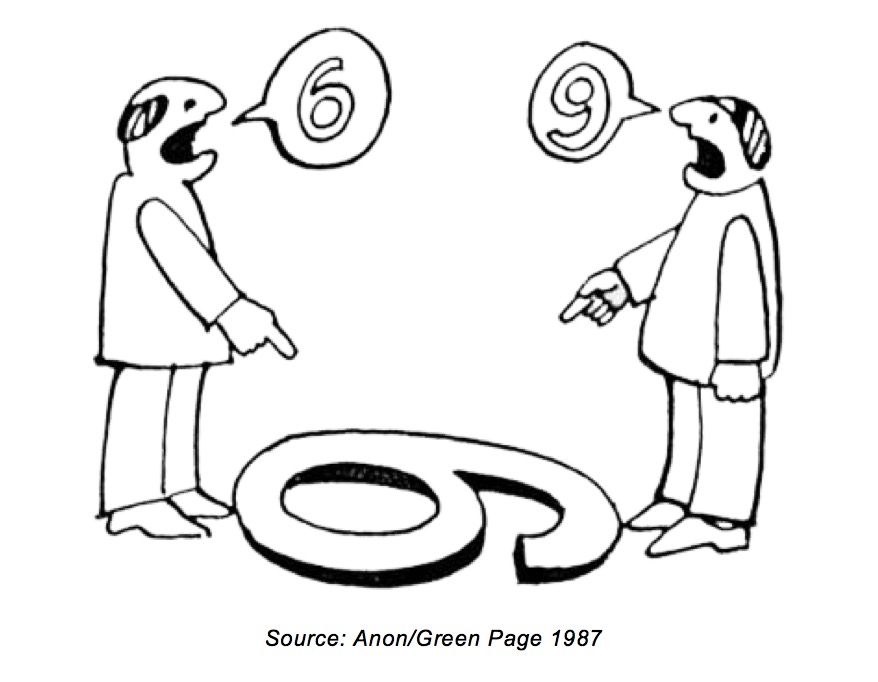 I have long loved the William Gibson line "The future is already here, it’s just not evenly distributed." If we look at the world in the right way, we see emergent futures more clearly. Which is why I used the 6 = 9 cartoon shown here in "Green Pages." But, as with the skeptics in our Cambridge debate, too often we look at the future through the eyes of the wished-for and the past.

We also use very different mental frames, even when we do see what’s going on. This is a theme that I cover in my latest Harvard Business Review column, exploring six basic ways business leaders now think of sustainability.

I have spent over 40 years working with business, through markets. But I was trained as a city planner — and now find my own mindset self-tuning to a wider set of wavelengths. Corporations and their supply chains remain central, but if we are both to deliver the U.N. Sustainable Development Goals and massively boost our carbon productivity, much of the work will have to be done in and by cities.

In Green Pages, we focused on urban renewal, but now we must understand — and change — the carbon metabolisms of cities and urban regions. That’s why a growing proportion of our own work focuses on helping CEOs and mayors work together to future-proof our economies. And that’s the agenda that we are beginning to explore in a new project with Innovate UK, which aims to boost productivity and growth through the better use of new technologies.

In Nottingham, we will be looking at new ways of improving air quality. In Newcastle, we will explore novel approaches to aging. And in London, we will consider how we might position this great city as a world capital of clean technology and sustainable growth. Once again, this will take a both/and mindset, blurring the boundaries between government, cities and business.

As Lloyd Timberlake argued in "Green Pages," sustainability is possibly the most powerful idea to have emerged in the 20th century. But its ultimate impact will depend on how cities and business work together to turn the idea into reality.

And, regardless whether the skeptics see it, a profound reboot is coming.