Japan, U.S. Come out Tops In Use of Green IT for Emissions Reductions

Of all the G20 countries -- those nations with the world's largest GDP -- Japan has come the farthest in putting green IT to work in reducing its carbon footprint.

That is the top-line finding of a new ICT Sustainability Index released this week by research group IDC. The report looked at G20 nations' use of technology in 17 areas to score their progress toward a low-carbon economy.

Of the G20 Industrial Nations, which are responsible for over 75 percent of the world's CO2 emissions, Japan was far in the lead, scoring 16 points in IDC's ranking.

The United States came in second in the list, with a score of 20, followed by a four-way tie for third between France, Germany, Brazil and the United Kingom, all scoring 21 points. 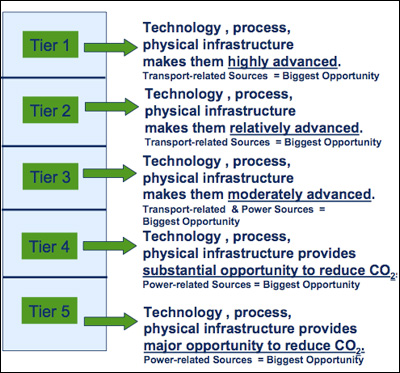 The lowest-ranked countries in the list were South Africa and Indonesia, each with a score of 41, while Russia and Argentina tied for next-to-last with 38 points.

Japan's energy efficiency policies, combined with its extensive adoption of IT, were the elements that put the country at the top of the list, making it the only Tier 1 nation in the rankings. The chart at the right lays out what the biggest opportunities for emissions reductions in each of the five tiers that IDC identified.

The 17 technologies that IDC included in its research for the Index fall in four categories -- Energy Generation and Distribution, Buildings, Transport and Industry -- and run the gamut from virtual conferencing and building energy controls to digital paper and industrial process automation.

IDC's researchers found that the Energy Generation and Distribution category has the biggest potential savings, and that Renewable Energy Management Systems offer the best opportunity to reduce greenhouse gas emissions. The country that has the most potential to benefit from this technology is China, which can save almost 200 million tons of CO2 by adopting renewable energy management systems.

In the Transport category, the United States was found to have the most potential for carbon footprint reductions, and that it could reduce its emissions by more than 500 million tons through supply chain logistics and transportation optimization.

In the industrial sector, there are plenty of CO2 reductions to be had from technologies like Intelligent Motor Controllers. China, with its role as the world's workshop, stood to benefit the most from the adoption of these technologies.

The full list of country rankings in IDC's Sustainability Index is below; more details about this Index and IDC's overall green IT research is online at IDC.com. 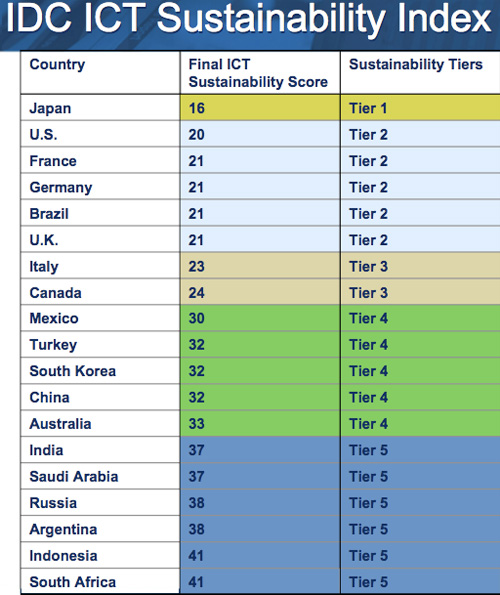