If you’re looking for the latest data to scare you into combating climate change, you won’t find it in Jigar Shah’s newly released book, Creating Climate Wealth.

Instead, Shah, founder of SunEdison, the solar company known for its unique service-versus-sales business model, and former CEO of the nonprofit Carbon War Room, says he deliberately steered clear of the climate fear factor — in favor of inspiring readers through the prospect of climate wealth.

Shah knows a thing or two about the latter, having built SunEdison from scratch — starting with a home equity loan and ultimately creating a company with more than $2 billion in sales last year.

Something of a solar star (yes, we’re inventing the term right here), Shah was returning from a recent book tour that already had taken him to Europe (Oslo, Amsterdam, Berlin, to name a few highlights) through the Midwestern U.S. (Minneapolis, Chicago) and on to California and Arizona by the time he had a chance to sit down with me in Manhattan to talk about the book.

Ann Goodman: What is climate wealth?

Jigar Shah: There are multiple meanings on purpose. Wealth can be [understood on the] personal, community, national, ecosystem levels. People like to use the word prosperity, but it’s not as inspirational as wealth, mainly because we lived through the 1990s, which was more about wealth than prosperity. For instance, CNBC celebrated people who make money versus do good in the world. Some of those, like hedge fund managers, are now celebrities in their own right.

Goodman: Haven’t you been on CNBC?

Shah: Yes, about three or four times for specials on energy, climate, solar. I don’t want to be a regular, because there are more important things to do, like inspire individual people to pursue climate wealth — not through media but through face-to-face contact.

Goodman: There’s lots of emphasis on media — especially social media and social networking. In this world, how can you inspire — much less reach — enough people through face-to-face contact?

Shah: When you think about the technologies we’re representing in the book — resource-efficiency technology, waste-to-value technologies, energy efficiency — you find these technologies generally get promoted not through logic but through trust. People generally don’t install energy-efficient technologies because of logical argument but because they talked to a friend — maybe at a church group or a poker game — because someone they trust said the technology works. That’s trust and it happens face to face.

Goodman: Can’t we do that through social networking?

Shah: I don’t believe that medium works to promote these solutions. It can help you organize alumni gatherings, or get you news on the Philippines typhoon, but it doesn’t make people buy solar energy, hybrid cars or deploy more climate wealth decisions. Those are things in the physical world. I’m asking you to put solar on your house, an electric vehicle in your garage. Those are things in the physical world, and they aren’t decisions that are trivial in nature. 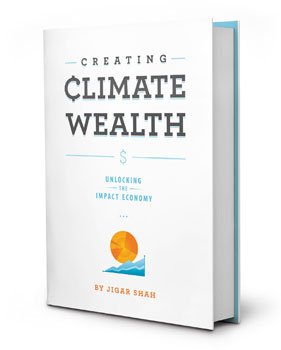 Goodman: How is your book different from the other books on climate change?

Shah: Mine is semi-autobiographical. It’s not so much about the potential of alternative energy but a description of the wounds, bruises, scars along the way — not getting paid on my first job, or working with Goldman Sachs. My goal is to make climate change and climate wealth solutions accessible and not just academic. I’m not trying to inspire people through fear, but help people access climate wealth. Most of the other books are about what’s possible theoretically.

The other thing I focus on is how to access mainstream capital. Most people gloss over the role of banks, pension funds, insurance companies and their role in combating climate change. Instead, I look at how Sun Edison got to its first $60 million, then to over $1 billion from Wells Fargo and MetLife, and I make guesses on how we might get to the $10 trillion [to stabilize rising temperatures]. I’m trying to help people understand how we got to these numbers, because otherwise, there’s a huge hole in how to solve climate change.

Goodman: Who is your audience?

Shah: It starts with entrepreneurs who want to participate in climate wealth, who want to understand the business opportunity, and quickly moves to investors, especially impact investors, then to technologists to see that their technologies are deployed, then to public policy and officials. But it’s not really for the general public. It’s probably for the half million of us actively working in climate solutions.

Goodman: Why do you write so little about climate change?

Shah: Because when you think about inspiring people, you should be able to succinctly think about the problem in one chapter, instead of scaring people half to death, like most books. I’m trying to inspire people to rise to the challenge. I think that helping people relate to how I got inspired myself is relevant to climate wealth, because lots of people believe that this problem can be solved purely through science and technology, and it’s not how I came to climate wealth. So telling people how I did it is important to get people interested.

Goodman: Do you think most people can make a lot of money from solving climate change?

Shah: It’s the only way we’ll make money! The days of consumerism are over; we’re at a point in our investing where we have to focus on common needs — transportation, agriculture, clean drinking water. It’s time to refocus on how we provide for the basic needs of the population.

Goodman: Is there anything in particular that you want readers to understand about climate change?

Shah: The only point I want people to know about climate change is that we already have the technologies to stave off the worst impacts.

Goodman: Why should people care about climate change versus other pressing problems, like war or the economy?

Shah: Climate change could be used as a euphemism for all the problems in the world. For instance, women’s empowerment: Around the world, women have to collect energy and it can take almost all their time. Or health: So many problems come from technologies that make the climate worse. Or the fact that we’ve created a system where we live beyond the means of our ecosystem — for instance, we use more water than we can replenish, we pollute it, and that leads to many other problems, like disease.

The economy has been one of the big challenges since the 1980s. We’ve [sacrificed] creating enough jobs for people in favor of a knowledge economy. And it’s not fair to say that if we just give people an education, they’ll move up. Some people want to work with their hands; there’s a longing for those days. Shah: I think that resources have been a source of war, and climate solutions alleviate those tensions. A lot of conflict comes about from resource struggles. And solutions come from sustainable resources.

Goodman: Now that you’ve done it all — created wealth, built a company, run a nonprofit, written a book — what are your aspirations?

Shah: The work we’ve done in solar needs to be translated to the other 17 sectors in the book, whether transportation, building efficiency, agriculture. Translating those lessons will take me a lifetime. It’s not something I can get done in a decade.

Goodman: How do you plan to do that?

Shah: Through people power. This is how we started. We have all the technologies we need to stave off the first stage, the 2020 goal, but we’re not selling enough climate change solutions to do that right now. The International Energy Agency in Paris believes we need $10 trillion of incremental new investment to stabilize to the 2 degrees we need. They think we’re on track to reaching $ 4.4 trillion of deployment, or just 44 percent of the goal. That’s 440,000 people selling $10 million of stuff by 2020, or $4.4 trillion. So we need 560,000 more people to get to $10 trillion by 2020. I think this is possible and that those people exist.

Goodman: You propose a no-money-down approach to financing the future. Could you explain?

Shah: In general, the “investor” fronts the money for no money down. The customer pays for the savings. So no money down can also be called “pay as you save.” The investor takes the risk that the savings don’t materialize and then they don’t get as much from the customer.

Goodman: What are the main points you want people to get from the book?

Shah: First, technologies exist today to save off vaster impacts by 2020, and they’re ready to be scaled up. There are lots of people lying to us about that. Second, the only way to deploy them at scale is to use a no-money-down model, so that everyone can put up solar panels and so on. The concept of infrastructure as service is the only way to get to $10 trillion. People won’t pay cash for all these solutions. Third, the deployment of these solutions represents the greatest wealth creation opportunity of our generation over the next 20 years. And, finally, these solutions are the same ones we need to solve all the other problems, whether water, tax revenue, women’s empowerment or blue-collar work.

Goodman: What’s standing in the way?

Shah: The solar no-money-down solution has to be brought to other sectors. Finding and training the 560,000 people is non-trivial. Getting governments to understand their proper role in deploying this isn’t easy. I do think the success of this strategy depends on our ability to assess the risk of doing nothing. The fear part is valuable to get people attracted. So it’s a yin-yang. … We’ve been worried about the fear stuff since Al Gore’s "An Inconvenient Truth." Now we have to match that with inspiration and hope.