The number of jobs in the green energy industry is increasing worldwide, but what needs to happen for this trend to continue?

The number, which covers people employed directly by renewable energy firms and throughout the supply chain, marks an 18 percent rise on the 6.5 million jobs recorded in 2013 — an increase that coincides with global renewable energy investment reversing two years of decline last year.

The report confirms solar PV remains the largest renewable energy employer, with 2.5 million jobs worldwide, up from 2.3 million last year. Meanwhile, the number of people employed in the liquid biofuels sector totaled 1.8 million and wind power passed the million job mark last year, up from 834,000 in 2013.

Similarly, the biomass industry now employs 822,000 people and solar heating and cooling completes the top five with 764,000 jobs, although the sector saw a 16 percent decline in employment compared with the previous year as the solar thermal sector continued to struggle to match the success of the PV industry.

The report also noted that a further 1.5 million people, about half of whom are found in China, are estimated to work on large hydropower projects and are not included in the 7.7 million total.

"This increase is being driven in part by declining renewable energy technology costs, which creates more jobs in installation, operations and maintenance. We expect this upward trend to continue as the business case for renewable energy continues to strengthen."

Asia is one area IRENA identifies as set for significant growth in green energy as manufacturing continues to shift from North America and Europe. While China leads the way with 3.4 million jobs, its Asian neighbors India, Indonesia, Japan and Bangladesh also feature in the top 10 countries for green energy jobs. 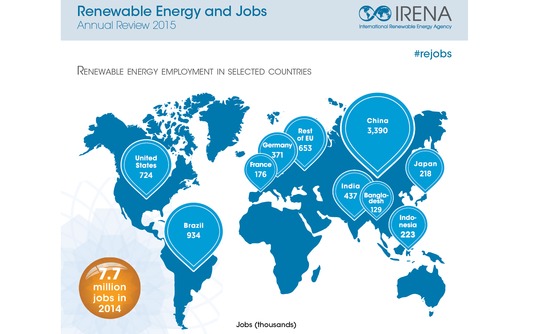 The surge in employment in Asia means that even with continued jobs growth, the EU and U.S. represent just a quarter of global renewable energy jobs, compared with 31 percent in 2012. China also tops global employment in solar PV, wind, solar heating and cooling, small and large hydropower, biomass and biogas, providing further evidence of the country's position as a clean energy superpower.

The gap from China to Brazil, the second country on the list, is almost 2.5 million. Of Brazil's 934,000 green energy jobs, 845,000 are in biofuels, which makes it the leading biofuels employer in the world.

However, IRENA finds that Brazil's wind industry is also growing rapidly, with employment increasing 12 percent year on year to 35,800. Wind power capacity has expanded from 1GW 2010 to nearly 6GW in 2014 and is tipped to reach 16.5 GW in 2019.

Germany remains the leading renewable energy employer in Europe, with 371,400 jobs making up about 57 percent of the EU's total green energy workforce of 653,000. German wind capacity expanded 5.3GW in 2014, the second largest expansion after China, and it is also set to overtake the UK in offshore wind installations this year.

While IRENA expects further employment growth across the globe, it warns the pace of expansion depends on the continuing strength of renewable energy investment. "Stable and predictable policies will be essential" to support job creation, it adds.