John Elkington and the search for What's Next

John Elkington has long been at the forefront of sustainability — including naming his hybrid think tank-consultancy SustainAbility way back in 1987, when almost nobody was using that term. Since then he coined the terms “triple bottom line,” “green growth,” “green consumer” and “people, profit and planet,” among others. He has foreseen more trends in the environmental and sustainability realm than most of us will ever experience. He always seems to know what’s next.

So when Elkington — now Chairman & Chief Pollinator of the "market catalyst" group Volans (and GreenBiz columnist) — told me last month he was coming to California to learn where the world was headed — well, I simply wanted to find out what he was finding out.

When I met up with Elkington, along with his traveling companions — Volans director Sam Lakha and Ingvild Sørensen, manager of Global Compact LEAD within the UN Global Compact — they were just minutes off a flight from Europe; our time in the Bay Area overlapped by just 12 hours. Our dinner together was their first stop in what turned out to be a whirlwind 10 days.

Last week, I debriefed Elkington about his visit. The following has been edited for clarity and length.

Joel Makower: When we had dinner, you had just landed in San Francisco. I'd love to hear what happened after we got together, some of the people you saw and what you learned.

John Elkington: Well, it was great to see you on the first evening, Joel, and I think you helped prepare our little team for some of the things that we might find, and some of those things we did indeed find.

It's very clear that something really quite profound has been happening in Silicon Valley for a while now. We'd heard about XPRIZE Foundation, for example, for more than 10 years, and Singularity University more recently, and a bunch of startups and incubators. So the idea was just to go and immerse ourselves in some of that.

I have to say, it left my brain reeling by the end, as California often does. And we're still working through the implications of all of that.

I have to say, it left my brain reeling by the end, as California often does. And we're still working through the implications of all of that.

Makower: Give me a little background on what this quest was about, why you took this trip.

Elkington: Earlier this year, we agreed on a two- to three-year program of work with the United Nations Global Compact, a platform of 8,300 companies. Their agenda has changed, and they have a new executive director, Lise Kingo, who came from Novo Nordisk. I'd worked with Lise from about 1989, so she’s somebody I've had a ongoing conversation with for a while.

When she took over, we both turned up at a conference in Madrid, and I was quite challenging in my speech about the future roles of business-to-business platforms. She turned to me and said, "So what should the Compact be doing?"

One of the things was to engage some of the exponential thinkers and practitioners and entrepreneurs, many of them clustered in California. So the trip was the beginning of that process: trying to engage these people, work out who they are, how they think, how they see the disruptive processes playing through, the degree to which they ever think about sustainable development, and things like the Sustainable Development Goals or COP21.

The answer: rarely if ever, although they're playing very much into that space.

Makower: Sure. They're doing these things because there's a business opportunity and because they have some general sense that this is what the world needs. But with some definite exceptions, they tend not to be passion-driven. They're just smart businesspeople focused on innovation and disrupting markets.

Elkington: I sometimes wonder whether there isn't a sort of almost retrospective greening of some of the initiatives that these people have launched. I mean, look at Elon Musk. I somehow doubt that through his career he's been focused on sustainable access and mobility. I think we all make up our life stories as we go along.

But one of the things that I think we discussed at our dinner was that we were looking for some of these exponential people, whether they were even remotely interested in dealing with incumbent companies in general, and the Global Compact in particular.

We were looking for some of these exponential people, whether they were even remotely interested in dealing with incumbent companies in general, and the Global Compact in particular.

And I have to say, we came away both surprised and delighted to find that routinely, pretty much everywhere we went, people were really interested in engaging on the right terms with the world of incumbents, because they see these people both as standing in the way and needing to be changed. But equally, they see them as deep-pocketed and able to invest in some of the new stuff that is now beginning to happen.

So I have to say, that was a surprise, but actually very encouraging.

Makower: That makes sense. The incumbents are the companies that are either going to buy, license, or become customers for some of these innovative technologies, or die trying — that is, they risk becoming dinosaurs. They know they've got to lead, follow or get out of the way. So, how many places did you visit?

Elkington: We saw in total about 25 or 30 organizations.

We saw old friends who sort of morphed into new roles — for example, Gil Friend, who you know very well, who is now chief sustainability officer in the City of Palo Alto. 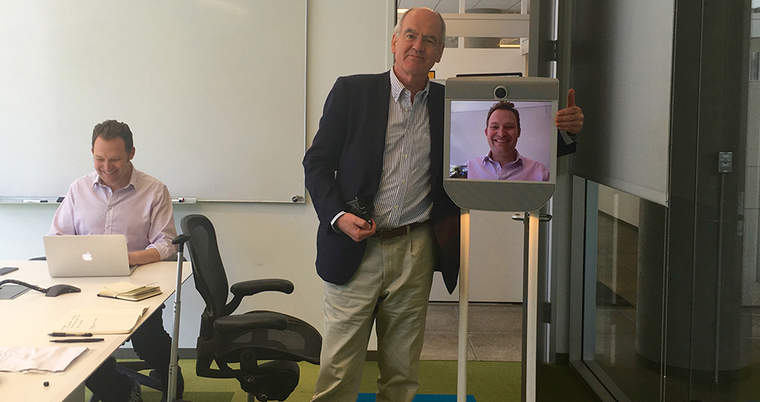 We also saw somebody who I'd not met before, called Adam Dorr, out at UCLA. I was really struck by a piece that he'd written recently, where he talked about the environmental movement and its complete failure to engage this shift in the global economy. In a sense, most of the scenarios that have been developed, particularly around climate change, have tended to assume very little, at least in his estimation, technological advance — whereas, he's basically saying, innovation is going through the roof.

So, it was a complex mix of different people, but broadly all saying the same thing, which is that we are at a most extraordinary juncture in all of this, and there is a new economy being designed and to some degree rolled out.

In a sense, most of the scenarios that have been developed, particularly around climate change, have tended to assume very little technological advance — whereas innovation is going through the roof.

But one of the things that Paul Hawken said to me really sticks in my memory: "Silicon Valley isn't great at thinking about consequences. They just do stuff and see what happens."

And the question in my mind is, do we just allow what happened with the oil industry and the chemical industry and the plastics industry and so on, where the consequences at times were a bit overwhelming — stratospheric ozone hole, for example — and just wait for that to happen? Or do we try and engage these exponential entrepreneurs and investors at an early enough stage to influence what they do? And that's where the openness to further conversations was quite encouraging.

Makower: What were some of the innovative companies you visited?

Elkington: Two companies really stand out in my brain as sort of outlining what I think we're seeing at the moment. One was PlanetLabs, who I'm sure you've come across. The other one was RBS, the UK bank, which has been teetering on the edge of bankruptcy.

At PlanetLabs I was fascinated because, as you know, I've been interested in how information and data can drive sustainability-related progress. PlanetLabs is launching microsatellites in fairly substantial numbers, and these things can then form almost the equivalent of a compound eye in space. And they're using iPhone technology, so they’re getting ahead of where people like NASA are.

And basically, the ambition is to democratize space imagery and space information that once would only have been in the hands of governments and security agencies. And they think about sustainability. So I think that defines one end of the spectrum — a new, quite large startup really playing into this space.

At the other end, you've got, as I said, a bank that's been teetering on the edge of bankruptcy, was rescued by the UK government, but they've had a presence in Silicon Valley and San Francisco now for several years. We met the guy, John Stewart, who's led that process, called RBS Solutions. What they're doing is not only listening and watching what people are doing, they're actually starting to incubate companies.

It's fascinating to see both new people banging away at completely different ways of creating value.

The day we were there they had four startups that were looking at how they might help businesses deal with a modern slavery act that has been passed in the United Kingdom. So it's fascinating to see both new people banging away at completely different ways of creating value.

Makower: So when you come away from all this, are you more optimistic or more concerned? What did this do for you just in terms of your hope or excitement about what's possible and everything that needs to be done?

Elkington: Well, Joel, you know me well enough to know that I was born an optimist. We have the wherewithal increasingly in terms of new types of science, new types of technology, new business models, and combinations of new and old business models, so if the political will is there, and if the entrepreneurial ambition and stamina is there, we can certainly make much of what is aimed for.

But for that to happen, equally, I think we've got to engage these new change makers in a set of conversations about how they themselves not only disrupt in good ways, but avoid some of the negative disruptions that I'm absolutely persuaded that will also help create along the way.

Can we move beyond incrementalism to the pursuit of zero?