Productivity is a modern buzzword, signifying a desire to do more with less while also allowing for evolution and growth.

Since the launch of the Climate Group’s EP100 (short for Energy Productivity 100) one year ago this month, the concept also has been buzzing through the sustainability industry. Businesses that signed the EP100 pledge commit to doubling their energy productivity within 25 years, or to improve it by 2.5 percent annually, through improvements such as investing in LED technology, power-saving equipment or even insulating spaces to prevent heat loss. The program is a variation on the group's separate Renewable Energy 100 program, which aims to scale corporate clean power.

"Everybody — whether they be a government, a city or a private sector organization — wants to increase their economic output, but they also want to minimize the amount of resources required to deliver those outputs," said Clay Nesler, vice president of global sustainability and industry initiatives at Johnson Controls. "And energy productivity puts both of those factors in one convenient metric that can scale [...] and provide a key indicator of progress."

Johnson Controls, a manufacturer of batteries and HVAC equipment, was one of the three original EP100 signatories, along with Mahindra & Mahindra, an Indian company that makes tractors and other industrial equipment, and German chemicals company Covestro. As of this month, 12 companies are committed to EP100. The Climate Group said that if 100 companies double their energy productivity by 2030, they could reduce over 170 million metric tons of greenhouse gas emissions.

The business case for making these changes is improved resilience, competitiveness and improved energy security. Many organizations already were on the path to energy productivity; EP100 helped them set a target and a baseline year from which to improve.

When Johnson Controls joined the program, it already had been tracking greenhouse gas intensity performance since 2002. The energy efficiency upgrades it made since 2002 resulted in savings of over $100 million in annual energy costs and helped cut GHG emissions intensity by 41 percent. Going forward, Johnson Controls will double energy productivity by 2030 compared to a 2009 baseline.

"The single most important thing we did was integrate energy management into our manufacturing system," said Nesler.

Johnson Controls’ focus is on the five areas of efficient lighting; improvements in heating, ventilating and air conditioning; optimizing compressed air systems; demand management and employee engagement. Almost all improvement will fall within a two- to three-year payback period.

"By engaging shop floor employees directly in the process, they come up with great ideas that can result in improvement of energy efficiency over time," said Nesler.

Introducing LED and magnetic induction lighting has a payback period of less than 12 months and returns that are higher than that generated by the core business, according to the company.

Because of these gains, "it’s not difficult to get the buy-in, especially from top management," said Hitesh Kataria, a manager from Mahindra & Mahindra's sustainability team. "When we showed the returns on [energy productivity], the approval was given within a week." Through EP100, new signatory Mahindra’s Holidays & Resorts plans to double energy productivity by 2030 compared to 2008-2009 baseline.

Energy productivity is a non-partisan way make the business case for sustainability and environmental action. According to a new report (PDF) by the Energy Transitions Commission (ETC), if combined with the transition renewable energy, the "untapped potential" of energy productivity could help global GDP grow by 3 percent annually while containing global warming below 2 degrees Celsius.

In the past, the ETC reported that we need 3 percent annual improvement (PDF) in average global EP through 2050 to stave off the direst consequences of climate change. And we’re almost there: the ETC said that energy productivity has increased by 1.4 percent between 1990 and 2005, and almost 1.7 percent from 2005 to 2015. 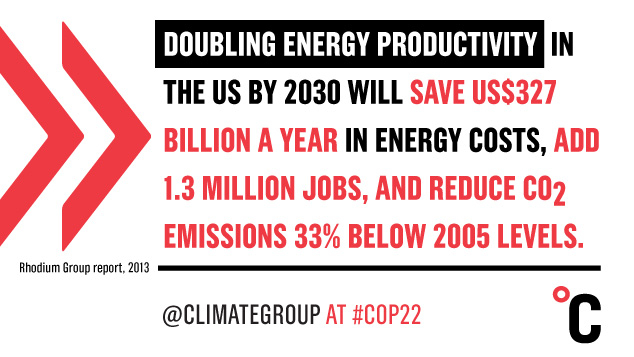 "The paradigm shift of connecting smarter energy use with better economic outputs has been one of the ways the campaign has evolved," said Jenny Chu, head of energy productivity initiatives at the Climate Group.

She said that EP100 has struck a chord because "with energy productivity, businesses can reconcile competing agenda like environment versus profit," especially in emerging markets.

Chu said the program was created as a complement to programs such as RE100, which commits businesses to sourcing 100 percent renewable power. "These initiatives aren’t created in a vacuum."

For example, Dalmia Cement joined EP100 first, then RE100. Land Securities, which reduced the energy consumption of its London office portfolio by 13 percent over three years, is also is a part of RE100 and EP100; so is reinsurer Swiss Re, which pledged to double energy productivity by 2020 compared to 2005.

Now comprising 12 members, EP100 is both a program that can bring economic and energy use benefits on its own as well as part of a holistic sustainability program, and it has value in both developed and emerging markets.

One of the program’s biggest challenges is what Chu called "commitment fatigue."

"People perceive energy efficiency as an extra task that will take more manpower and resources," she said. "Energy productivity makes sense on paper, but translating the numbers and buy-in is still a protracted process" and may seem less glamorous than, say, installing solar panels on-site to increase the desirability of a building.

There is also no official report yet of EP100’s overall success; Chu noted that RE100 didn’t publish an annual report until it reached 50 members.

Still, commitments are rolling in, with H&M and U.S.-based LED lighting manufacturer Cree announcing their participation during the Energy Efficiency Global Forum in Washington D.C. in May.

H&M plans to build future stores using 40 percent less energy per square meter compared to those constructed today and to invest in new HVAC technology. To meet its commitment of doubling energy productivity by 2030, the retailer will engage every company in its supply chain to focus on energy efficiency five years ahead of its goal.

"We have long been working to reduce our climate impact and recently launched our new commitment to achieve a climate positive value chain by 2040," said Pierre Borjesson, global sustainability expert, H&M. "This means H&M will support reductions of greenhouse gasses to a larger extent than what our value chain emits."

Addressing the commitment required, Johnson Controls’ Nesler said, "One of the challenges that many organizations have when they consider such an aggressive and long-term goal is wondering if they can sustain that performance over time. But we’ve found that we’ve been able to maintain a relatively constant rate of improvement from 2002 all the way through 2016."