Like most multinational food companies, Kellogg relies upon a far-flung supply chain of farmers spanning five continents and dozens of countries to grow its ingredients.

In emerging markets, some of those working the land for its cereal and baked good ingredients are smallholder farmers, tilling a few acres each. In India, for instance, Kellogg estimates that 23,258 smallholder farmers supply the maize, rice, wheat and honey it uses in its nearby production. In Cote d’Ivoire it relies on 7,237 smallholder farmers for cocoa, in Egypt, 6,355 grow rice for Kellogg and in South Africa, 5,800 grow maize.

In all Kellogg figures it sources ingredients from 65,000 smallholder farmers.

Nearly half of smallholder farmers around the world are women. But in many developing countries where smallholding dominates, generally men conduct the business transactions and get access to finance and training — if anyone does.

Women do the field labor or are subsistence farmers for their families, with little chance to earn incomes on their own.

Kellogg decided to investigate how to improve the lot of female farmers in smallholder communities about a year and a half ago, just as it was expanding it sustainability initiatives and as the U.N. and global business community began drafting new Sustainable Development Goals to address world poverty. One SDG goal is empowering women and girls.

Mindful of the vulnerability of its smallholder farmer supply chain in this era when changing climate patterns can disrupt harvests, Kellogg began a pilot project with TechnoServe, an NGO focused on entrepreneurial initiatives in Third World areas, to teach 3,000 smallholder farmers about sustainable farming practices that could help their crop yields.

Tuesday, on International Women’s Day, Kellogg launched an initiative to help 12,000 women who are smallholder farmers in India receive training.

Tuesday, on International Women’s Day, Kellogg and TechnoServe launched an initiative to expand their work in India to help 12,000 women who are smallholder farmers receive training in so-called "climate smart agriculture" and get access to financing, tools and agricultural inputs such as drought-resistant seeds.

It also is launching a program in South Africa to train 400 women who are subsistence farmers to improve the quality and quantity of their yields through climate-smart agriculture so they can produce enough to consider selling crops for income and thus better support their families.

"The number of smallholder farmers in the world is continuing to increase," said Kellogg’s Chief Sustainability Officer Diane Holdorf in an interview about the initiatives. "And it is estimated that 43 percent of small holders are women, so they are playing a critical role in supporting families, communities and providing sufficient food supply for the world."

Yet many female smallholder farmers live on the edge of poverty — or stuck right in it.

"We know that in many of these societies, these women face very significant challenges; they lack access to training, lack access to financing and lack access to seeds that would really help them to improve their agricultural yields and livelihoods," Holdorf said. 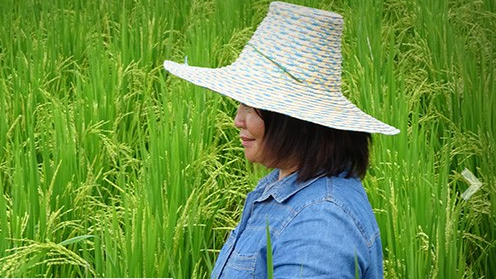 As global warming challenges many farmers with shorter planting seasons and drought or flood conditions, Kellogg figures it is both good corporate citizenship and good business sense to help farmers adjust. Moreover, food companies need to diversify geographic sourcing to hedge against diminishing supplies as the world warms and some crop lands dry up.

A logical place to start is India, where Kellogg relies on more smallholders than in any other market. 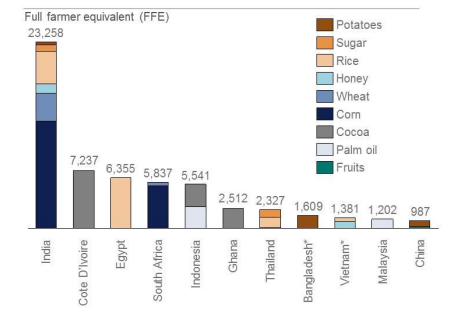 That is because India’s agriculture is primarily on small subsistence farms. Some 78 percent of India’s farmers or 93 million are small holders, according to the Food and Agricultural Organization. About half of India’s population are part of smallholder families; it’s also this population that suffers from deep poverty.

Kellogg has contracted with TechnoServe, an NGO that works with entrepreneurs in the developing world to build competitive farms, businesses and industries. It contracted with them to develop a network of franchise farmer producer companies.

Seeds, high quality fertilizer, knowledge are all needed to increase the quality of their yields.

"Access to high quality agricultural inputs is a real challenge in India. Seeds, high quality fertilizer, knowledge are all needed to increase the quality of their yields," explained Samantha Krause, senior manager of strategic initiatives at TechnoServe.

She and her team are working with Kellogg to develop the franchise network or "micro shops at the village level in remote areas that could support farmers with high quality inputs."

Kellogg is provided an undisclosed sum to build the network and help finance the agricultural inputs.

The way Krause envisions it, "franchisers source the seeds and inputs in bulk, and distributes it out to micro- entrepreneurs who sell them at the village level," she said.

She said they want to develop a 2.0 model of the micro shops wherein they become "centers of excellence," where people can go to learn, particularly how to farm in a sustainable way.

Inside the big business of investing in supply chains

Agroecology: The science that can help scale sustainable food

Farmers are reaping the love of Campbell, Kellogg, Stonyfield and Molson Coors

How She Leads: Diane Holdorf, Kellogg