Randy Miller farms about 1,000 acres of corn, soybeans and hay in Iowa’s corn belt, where this time of year shoulder-high plants stretch for hundreds of miles.

Here, and for a huge swath of the Midwest from Nebraska to Ohio, generation after generation of farmers have provided the row crops that are staples of the American diet.

And yet a quiet revolution is happening here, despite that history. It's manifest in the reduced fertilizer use and better yields from taller, fuller plants on Miller's farm: Sustainable farming has taken root among farmers of roughly half of the U.S. row-crop acreage.

"We cut our nitrogen amounts by 25 percent give or take this year," Miller said, after describing his use of so-called split application of nutrients and planting cover crops of rye and oats on his fields in the off season to replenish nutrients naturally and improve the soil's water retention. 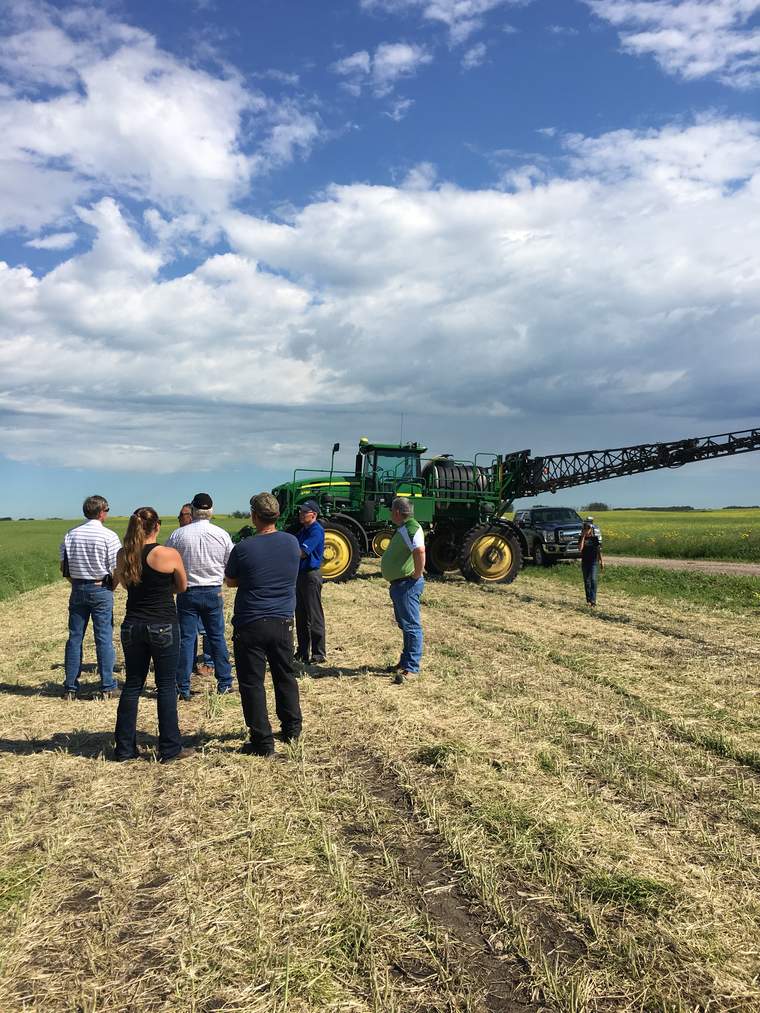 SUSTAIN
<p>Farmers being trained on the EDF/United Suppliers' SUSTAIN practices.</p>

These practices also mean money savings for the farmer and less nitrogen pollution in groundwater.

Miller is one of hundreds or potentially thousands of farmers taking up sustainable farming practices urged by a growing number of food companies and agriculture retailer cooperatives that make up the farming economy.

A major cooperative of ag retailers in the Midwest, United Suppliers, whose members supply and advise farmers who collectively grow crops on about 45 million acres, developed a program called SUSTAIN with the help of the Environmental Defense Fund. SUSTAIN is a toolbox of proven technologies and practices, data and advisory information on sustainable field nutrient management and efficiency, water management and soil health.

Farmers who provide crops to suppliers of General Mills, Unilever, Campbell Soup, Smithfield Foods, and Kellogg use the SUSTAIN program.

Starting Aug. 1, SUSTAIN will be joined with the sustainability program of Land O' Lakes, itself a cooperative of farms and agriculture companies, to influence an even larger swath of the Midwest farm economy.

"We touch about 50 percent of the acreage of row crops — corn, soybeans, wheat, rice — in the United States," said Matt Carstens, vice president of United Suppliers who will head up the combined SUSTAIN program under Land O' Lakes beginning in August.  At that point, the potential reach of the SUSTAIN and related sustainability programs through the network of ag retailers who advise and supply farmers will jump.

The adoption of SUSTAIN has been so swift — by both farmers and big food companies — that it is quickly becoming mainstream farming. According to EDF, 15 food companies representing about 30 percent of the U.S. food and beverage market are committed to the program, particularly on efficient fertilizer use. And that was before the merger with Land O' Lakes.

We touch about 50 percent of the acreage of row crops — corn, soybeans, wheat, rice — in the United States.

According to Carstens, SUSTAIN practices include everything from tissue sampling, or lab testing one leaf of a plant to determine exactly what that plant needs, to split application of nutrients for more precise delivery, to planting of cover crops to retain moisture and soil health in between planting seasons, to planting grass buffers on irrigation water ways to capture sediment and nitrogen before it gets to streams.

It also includes advice and instruction on reduced tillage to prevent the soil from losing the natural microbial growth and nutrients that spring from the biological breakdown of the previous season's crop residue. It trains farmers in plowing with blades that create rows amid plant residue on the soil without clearing it.  And it includes the use of big data, or using the readings of all sorts of data about a field from soil components to moisture levels to weather forecasts and indicators in algorithms to help farmers decide when to plant, when to harvest, when and where to irrigate and what nutrients to add on which rows.

Environmentally, many of these tools reduce soil erosion and runoff and thus nitrogen contamination of groundwater. They also reduce the need for so much fertilizer in our food, conserve water and cut the carbon emissions from a farm by keeping the carbon in the ground.

Suzy Friedman, senior director of agricultural sustainability at the Environmental Defense Fund, has been working with farmer groups, ag retailers, food companies and United Suppliers on the SUSTAIN program.

"Our goal is really to help foster an agricultural system that is both highly productive and more sustainable particularly in water and climate resilience," Friedman said in an interview. "We saw an opportunity to have a major driver of that be demand from the food sector."

EDF first started working on fertilizer efficiency with Walmart when the giant retailer decided that wanted to reduce the environmental footprint of the commodities used in its products. Because Walmart is so huge, its actions affected the market.

Food retailers Unilever, Campbell Soup, General Mills and Smithfield Farmers joined in the sustainability sourcing of farm products bandwagon, encouraging suppliers to use SUSTAIN and other programs to strengthen their individual efforts toward sustainability.

And Kellogg this summer joined in a big way, after having worked individually with suppliers and farmer groups to spread a farm-to-table sustainability philosophy.

Diane Holdorf, Kellogg's sustainability chief, said, "People increasingly really care about where their food comes from, how it is grown and how it is made. We can’t do this really important work to protect the land without collaboration" with farmers and ag retailers and others in the agricultural economy, she said.

In bringing SUSTAIN to its wheat suppliers in Nebraska, Kellogg expects it could influence farming of roughly 750 farmers working about 1 million acres.

They would be in addition to farmers of 2 million or so acres already using pieces of the SUSTAIN program.

EDF’s Friedman said a sort of tipping point has been reached where these practices are being adopted at scale. Before, each food company was trying to work individually with suppliers. "We saw a lot of pilots for a long time," she said.

But as collaboration and something designed for farmer that saves them money, SUSTAIN program seems to have hit a breakthrough point.

"We believe that if we can get at least 45 million acres of corn in the sustainable program, if we can reach that goal by 2020 we think that can be a real tipping point, so that (sustainability) could be the norm by 2025," she said about corn, of which roughly 90 million acres are in production in the U.S., according to the Department of Agriculture

"Similarly with wheat and soybeans," she added.

About 85 million acres of US farmland are used to grow soybeans, according to the USDA, and 56 million to grow wheat. Getting farmers of at least half those acres to take up sustainable practices would add another 70 million acres into sustainable cultivation.

Carstens doesn’t think these goals are far-fetched: "Farmers don’t want to lose any of their product, either, so anything they can do to feed their plants and feed more of the world, they want that."

Farmers typically lose 40 percent of their fertilizer nutrient additives to run off when rain or unreceptive soils, he said, so anything to prevent runoff saves them money.

Back in Iowa, Miller likes what he sees. Since he began using split application of nutrients, or fertilizing his fields in smaller precise amounts two or three times a year instead of one big application, and planting cover crops in between growing season, he has saved money and is on a path to improve yields.  "This year the crops are a lot better than usual," he said.  A lot of variables go into crop health including weather, but he believes improvements to the soil's health from cover crops might be part of it. "And I'm saving money."

By planting rye, oats, radishes and turnips for the winter season, he is watching the soil of his fields get spongier, hold water better and replenish without much fertilizer by using the nutrients from these off-season crops.

Brent Hall, the ag retailer that Miller relies on, said that his farmers had such good results in the first year of the SUSTAIN program that he went from three farmers to 28 farmers now using the program’s tools and practices. Together they farm 11,200 acres.

Before split application, we were losing 40 or 50 percent of the nitrogen to rain fall.

"Before split application, we were losing 40 or 50 percent of the nitrogen to rainfall," Hall said of the four dozen farms he oversees as the ag retailer and adviser in the Lacona, Iowa, region.

Now they are seeing a boost in yields.

"We went with split application and my farmers saw an average 30 bushel increase," in corn production last year, from 160 to 190 bushels for the average farm in his area, Hall said.

That's what farmers want because that is what improved productivity looks like.

What Michael Pollan gets wrong about Big Ag