Keystone XL and the next frontier in fossil fuel risks

When President Barack Obama announced Friday that he would reject the $8 billion Keystone XL oil pipeline proposed to run 1,179 miles through a central artery of the United States, he included one particularly forward-looking — and particularly controversial — line of reasoning.

Among the potential complications linked to funneling 830,000 barrels of crude oil per day from Canada's Alberta tar sands to the Gulf of Mexico: warnings are mounting that untouched carbon assets, like coal and oil buried deep under ground, might just have to stay there to avoid the worst impacts of climate change.

For the financially inclined, the term of art is "stranded assets," and a scenario where these carbon assets become economically unfeasible to extract could ultimately mean trillions of dollars in write-downs on the balance sheets of hulking energy companies that have long buoyed the global economy.

In explaining why he rejected the Keystone proposal, Obama specifically alluded to the esoteric concept:

"Ultimately, if we’re going to prevent large parts of this Earth from becoming not only inhospitable but uninhabitable in our lifetimes, we’re going to have to keep some fossil fuels in the ground rather than burn them and release more dangerous pollution into the sky," Obama said.

The nod from the White House comes as entities such as the Bank of England, the world's largest sovereign wealth fund in Norway and the philanthropic Rockefeller Brothers Fund begin to buy into the notion of a "carbon budget" — a proposed 565-gigaton-limit on CO2 emissions until 2050 to a avoid a potentially catastrophic increase in Earth's temperature above 2 degrees Celsius.

The catch: There isn't universal accord on emissions limitations. And absent a regulatory driver, like a highly unlikely global carbon tax being enacted at the United Nations COP21 climate talks in December, the question remains why investors who prioritize short-term profits would voluntarily move money away from fossil fuels in the name of mitigating longer-term climate risks.

Even rhetoric from one of the world's most visible political figures isn't the same as a shift in the financial and political realities that fuel the energy industry.

Fossil fuel companies still benefit from trillions of dollars in long-established government subsidies each year — penciling out to $10 million a minute, according to one International Monetary Fund report — and industry lobbying groups have long been a power player in federal politics.

Clean energy skeptics, meanwhile, contend that fossil fuel alternatives won't materialize rapidly enough or broadly enough to phase out oil, gas and coal. In this school of thought, rapidly-evolving solar, wind and carbon capture technology, nor the specter of global carbon regulations, will be enough to ween the economy off oil and gas.

"The big breakthroughs are still the stuff of hope rather than reality," former BP executive Nick Butler recently wrote in a Financial Times article appearing under the headline "Climate change and the myth of stranded assets."

Environmental activists contend just the opposite — that the Keystone rejection, coupled with recent events such as the New York state inquiry into Exxon Mobil's alleged decades-long cover up of climate research detrimental to the oil business — are the culmination of forces that point to an inevitable shift to low-carbon energy.

Writing for the New Yorker, environmental activist Bill McKibben contends that political opposition to the fossil fuel industry that once "seemed utterly quixotic" has evolved into a formidable lobbying block.

"The fossil-fuel industry will, of course, do everything it can to slow that effort down," McKibben wrote. "Even if the tide has begun to turn, that industry remains an enormously powerful force, armed with the almost infinite cash that has accumulated in its centuries of growth."

While Obama considers Keystone a flash point in the conversation about climate change that has occupied "an over-inflated role in our political discourse," the issue has highlighted a shift in energy politics that reverberates in both corporate and consumer markets.

Large corporations such as Apple, Google, Ikea and Walmart are investing millions in renewable energy, often as a price hedge against anticipated volatility in grid-supplied fossil fuel power. Residential solar is another fast-growing market that throws a major wrench in century-old power generation and utility business models.

As with stranded assets, however, growth in renewable energy capacity is inextricably tied to the regulatory climate. The result in the U.S. is the current patchwork of highly fragmented state and local conditions for buying deregulated energy, which have been shaped through decades of horsetrading between entities with a glut of cash on hand.

Federal political donors associated with the oil and gas industry have invested more than $460 million in elections since 1990 alone, according to the nonpartisan Center for Responsive politics. Republican candidates have historically received more than three-quarters of those funds, and major donors have increasingly contributed to largely unregulated outside spending groups. 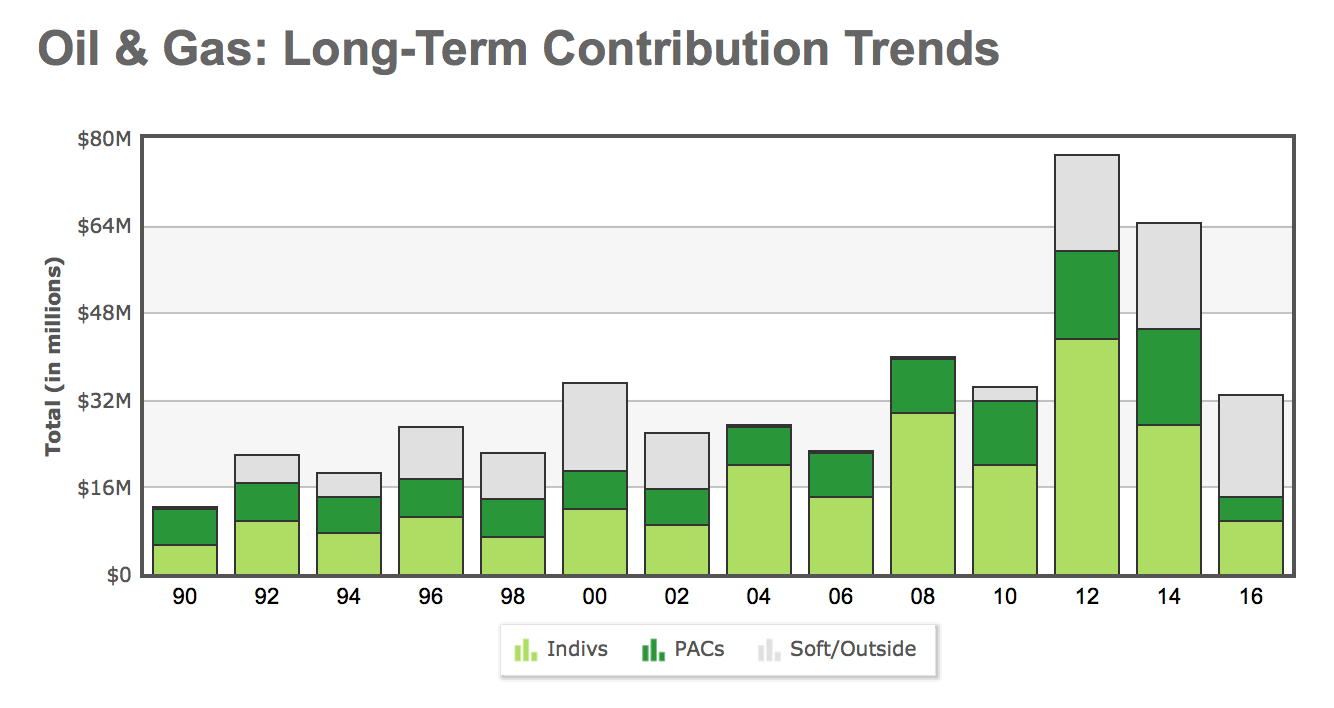 Electric utilities have spent an additional $207 million on federal elections since 1990, on top of $95 million from the U.S. mining industry.

Major donors including political action committees associated with the League of Conservation Voters, Sierra Club and billionaire clean energy advocate Tom Steyer's Nextgen Climate Action have spent a cumulative $138 million since 1990, with a notable increase after 2000, according to Center for Responsive Politics data. 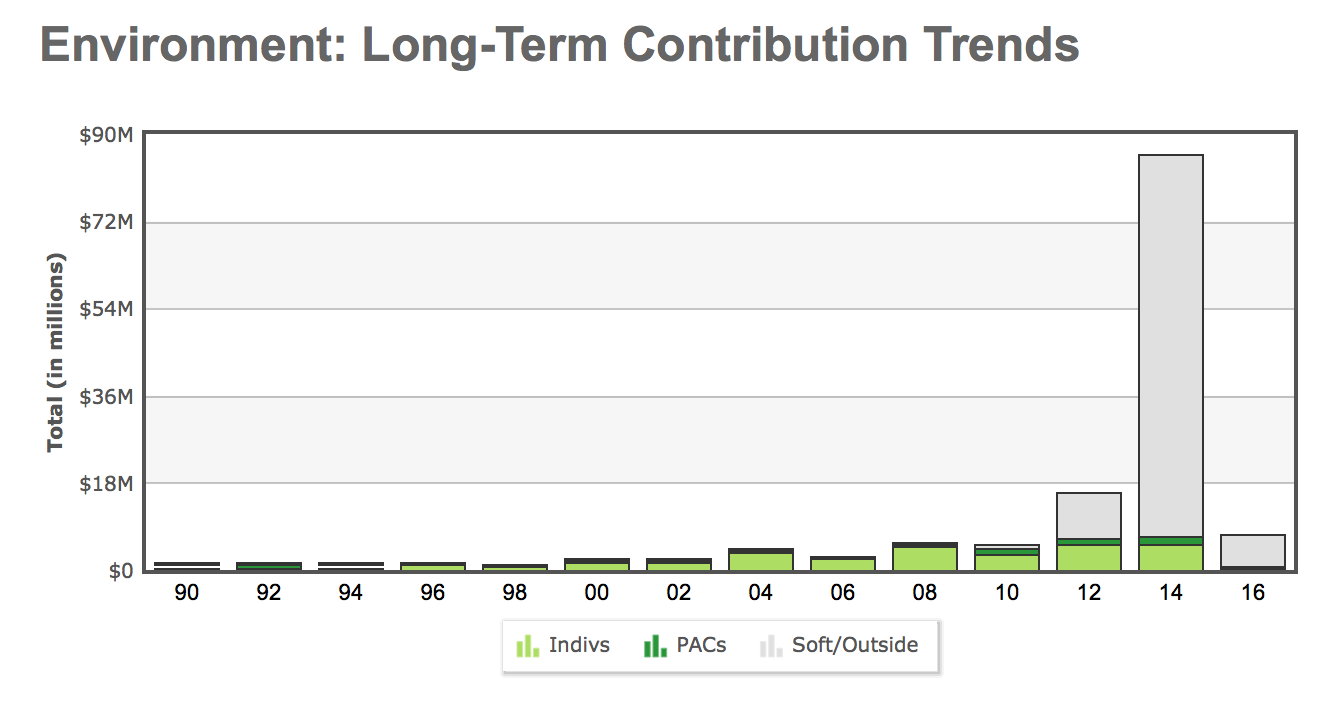 In the meantime, climate advocacy groups like Ceres and CDP have also worked to put pressure on companies and investors to disclose more information about financial risks related to carbon emissions. Specifically, they want information on carbon assets and emissions included in mainstream financial reports to regulators like the Securities and Exchange Commission.

How the once-wonky world of stranded assets may or may not come into play in Paris or the 2016 U.S. presidential and congressional elections remains unclear, but that the issue has even made it to the White House relects a major shift in the tenor of the national conversation over climate change.