L.A. aims for the future of urban mobility with... Xerox?

A new tech pilot project in the notoriously sprawling city aims to make sense of the dizzying new array of transportation options.

If you've got the disposable income and the patience to deal with the quirks of multiple mobile apps, there have never been more ways to move around a city.

Need a ride? Public transit, a cab, a carpool or an on-demand trip with Uber or Lyft could be your best bet. Want to be behind the wheel? A personal car, a subscription to a carsharing company like Zipcar or Car2Go, or even an old fashioned car rental counter can come in handy. Of course, biking is always an option for those willing to invest some sweat equity.

It sounds great in theory. But what if the train you rely on is late, or the ridesharing company you were planning to use hits a sudden price surge? What if you didn't even realize there was a bus stop around the corner from your apartment?

The element that's often missing in the so-called "urban mobility" rush is the ability to compare all of your options at a given moment.

In a bid to fill that void, the city of Los Angeles and business services giant Xerox this week announced a new pilot project that roles public and private transportation options into one custom mobile app for the city, Go LA.

Users of the free app will be able first to select what kind of transportation options they're interested in (Motorcycles? The ridesharing company du jour? Whatever's around?), then sort the results by what's fastest, cheapest or greenest. Xerox, which is footing the bill for the initial pilot, also hopes to roll out payment and scheduling capabilities. 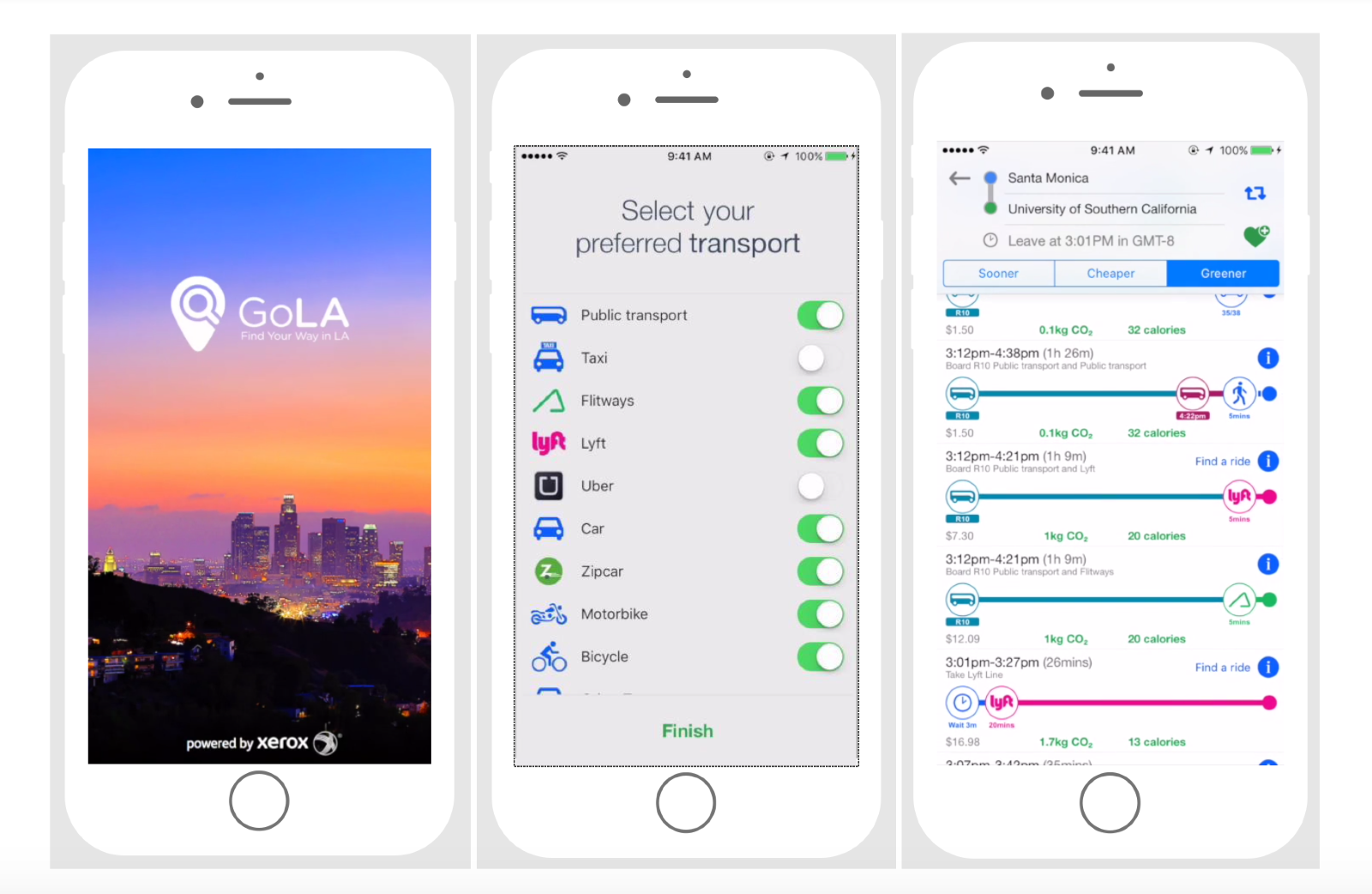 "Go LA gives users the opportunity to move around in smarter, faster, cheaper and greener ways by linking them to all the transportation options available to them — from freeways to Metro to bike routes — while also providing the city with useful data to help us make policy decisions," L.A. Mayor Eric Garcetti said in a statement.

The app works by pulling realtime data through back-end APIs provided by transportation companies and public transit agencies themselves. As part of the deal, the city gets access to anonymized travel data from private providers, ostensibly to be used for making decisions in the run up to a planned 20-year overhaul of the city's notoriously dysfunctional transportation systems.

Providers including Uber (and sharing economy compatriots such as Airbnb) have in the past been reluctant to offer detailed data to cities mulling tighter regulations for new types of transportation service companies, which avoid many costs incurred by regular taxis. Uber has argued in legal documents that it is merely a lead-generation service for drivers, who work as independent contractors instead of employees that receive benefits.

Among the questions cities are looking for more data to answer: Do ridesharing and carsharing actually cut emissions, or are people opting for cars over public transit? There are also other ongoing transportation market shifts with big implications for efficiency and emissions to consider, such as encouraging the adoption of electric vehicles and ultimately planning for autonomous vehicles.

Still, Xerox Senior Vice President of Mobility Solutions Dave Cummins said there is incentive for ridesharing companies and other transportation providers to participate in experiments such as the Go LA pilot.

"It’s free marketing," he said. "The biggest challenge is just all of these companies are very busy. Doing the integration of our respective back ends takes time."

Once the companies are on board, however, it should be relatively easy for Xerox to roll out similar offerings in other markets. The company already intends to launch another pilot in Denver next month.

Go LA is just one variation of an aggregation model that several aspiring transportation information providers are also chasing.

Although Xerox might not be the first name that comes to mind at the mention of urban mobility, the Connecticut-based company with a market cap of more than $9 billion has been in the transportation game for years. Parking management, public transportation management and electronic toll collection are a few of the company's longtime transportation-focused offerings.

With the advent of the smart city and urban mobility fads, the company sees a new opening to beef up its tech service offerings, Cummins said. Xerox now advertises products including "smart parking" and "intelligent payment."

As other companies eyeing smart cities have realized, though, business models in the field aren't always clear cut.

Sprint, IBM, Google, Microsoft and Cisco are a handful of the big names dabbling in the space, with many professing a desire to hone new types of public-private partnerships — though how exactly taxpayers would see a payback on any city investments in new mobile apps or infrastructure remains largely unclear.

Cummins said that Xerox plans to track data on everything from user travel preferences to how much money they spend, how big their carbon footprint is and even how many calories they burn running daily errands. Although that data eventually could be of interest to advertisers — one of the most promising revenue opportunities for smart cities — specific opportunities likely won't come into focus until after the company-funded pilot.

"We are exploring a number of different option for cities if they want to monetize," Cummins said. "Right out of the gates, we’re just focused on getting this solution launched and getting as many users as possible. The more users, the more viable these revenue streams become."

The element that's often missing is the ability to compare all of your options at a given moment.

A number of Xerox divisions, including four R&D centers in Silicon Valley, France, India and New York, were involved in honing the Go LA application — a test of in-house innovation capabilities that comes at an important time for the company.

Xerox reported revenue in excess of $4 billion during its most recent quarterly filing last fall, although sales in core business units such as office equipment continue to trail off. In a third quarter earnings call late last year, Xerox CEO Ursula Burns said that acquisitions likely will be "one of the key pieces" to the company's transformation into a service provider.

"If you listen to the earnings calls, you’ll hear the transportation division mentioned quite often. It’s definitely a strategic focus area," Cummins said. "This is part of the whole transportation of Xerox into a services company along with a technology company."

They're not the only ones who see the opening in urban mobility. Much like Daimler's emphasis on mobility offshoot Moovl, General Motors this month announced that it, too, was spinning off a new company called Maven to take on new carsharing projects. Honing better mobile offerings is key to the strategies of automakers as well.

"At the end of the day, it's about a user experience that is frictionless and not having to go to multiple apps," General Motors Executive Director of Urban Mobility Peter Kosak recently told me.

Although car companies aren't part of the Go LA pilot yet, Cummins said Xerox is evaluating whether it could make sense for automakers to get involved as they jockey for position in the fast-moving mobility field.

"We’ve talked to most all of the auto OEMs," he said. "You can just look at their marketing — many of them are calling themselves mobility companies."