LA, DC and SF Top List of Cities with Most Energy Star Buildings

<p>For a second consecutive year, Los Angeles, Washington, D.C., and San Francisco took the No. 1, 2, and 3 spots at the head of the U.S. Environmental Protection Agency's list of 25 cities with the most Energy Star rated buildings in the country.</p>

More than 12,600 commercial properties in the United States now meet the U.S. Environmental Protection Agency's standards as Energy Star buildings, and for a third consecutive year Los Angeles tops the agency's list of cities with the most energy efficient buildings.

For a second straight year, Washington, D.C., and San Francisco hold the No. 2 and No. 3 spots, respectively.

The EPA released its annual list today of the 25 cities with the most buildings that have earned Energy Star status in the past year. To qualify for the energy efficiency rating, buildings must perform in the top 25 percent of a nationwide comparison of similar properties, and performance must be independently verified by a registered architect or a licensed professional engineer.

The EPA awarded its first Energy Star for a building in 1999 and has compiled a list of top cities with Energy Star buildings for the past three years.

Energy use by commercial buildings is responsible for about 20 percent of greenhouse gas emissions in the U.S. and more than $100 billion in costs each year, according to the EPA. The agency estimates that Energy Star-certified buildings prevent greenhouse gas emissions equivalent to emissions from energy use by almost 1.3 million homes in a year and save some $1.9 billion in energy costs.

The roster of Top 10 cities for Energy Star buildings has not changed much since the list has been compiled, although the rankings of cities in second to 10th place have often shifted. This year, the cities of Detroit and Sacramento, Calif., are new to the list, displacing Denver and Lakeland, Fla.

Here are the Top 10 lists for the past three years:

The number of Energy Star buildings has climbed in recent years with 2010 seeing the greatest amount of growth in a year-long period. Last year, 6,200 buildings earned Energy Star certification. The growth is illustrated in the charts above and below, which also show that the threshold for the Top 10 list has risen each year. 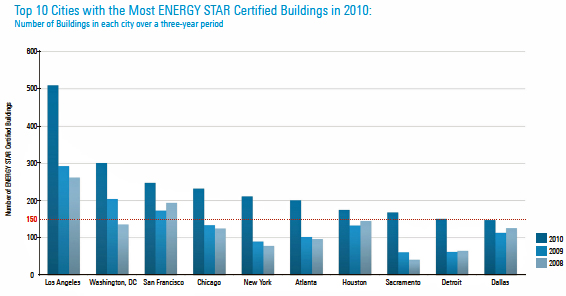 For 2010, Los Angeles held the No. 1 position with 510 buildings certified that year. Dallas-Fort Worth was in the 10th slot and was the only city in the Top 10 to have fewer than 150 buildings Energy Star-certified. Also in 2010, five of the Top 10 cities were in California, the most for any state since the lists have been compiled.