This is Part 2 of a three-part series on Land Rover BAR's sustainability strategy. Check out Part 1 and Part 3.

The winner of the 2017 America’s Cup, to be contested in June in Bermuda, immediately will attain sailing immortality. The squad that ends up hoisting the oldest international sporting trophy will be the one that most effectively melds top individual sailors to work together to become the best team.

But "team" in the America’s Cup case doesn’t refer only to those on board.

Each entrant in the race has an onshore phalanx of designers, engineers and software experts searching for marginal gains from the best design and most advanced technological expertise to create the quickest boat.

Sustainability has provided Land Rover BAR with a set of extraordinary partners, as well as a progressive, core element of its DNA.

And there’s more: Land Rover BAR’s America’s Cup prospects and its green bona fides are bolstered by a dedicated cadre of corporate and foundation partners. By having these partners collaborate around sustainability, Land Rover BAR has taken a major step forward in the way team sponsorships are crafted and activated.

Whether the commitment to sustainability and having a group of like-minded partners will help Land Rover BAR win the America’s Cup still remains to be seen. However, it’s fair to point out that sustainability has provided Land Rover BAR with a set of extraordinary partners, as well as a progressive, core element of its DNA — one that binds the entire operation closer together.

When one thinks of a typical sports sponsor, the mind may go to a beer brand or perhaps to an insurance company. The mind most definitely does not wander to an organization that, rather than mixing hops and malt and water, or making bets on car accident rates, instead supports winning sailing teams committed to sustainable practices that improve the health of our oceans.

That is exactly what 11th Hour Racing does, rather than providing a service or selling a product.

It recognizes that sport is a force for positive social change and, that in the marine arena, there is no better platform than a partnership with a top-flight America’s Cup team through which to promote ocean health and stewardship, and find viable solutions to the issues at stake.

Given Ben Ainslie’s status as an America’s Cup champion and Olympic icon, and his interest in ocean health and climate change, it’s hard to imagine a better fit. Ainslie took the first step by reaching out to 11th Hour Racing.

11th Hour Racing President Jeremy Pochman picked up the story from there: "After winning the 2013 America’s Cup for Oracle Team USA in San Francisco, Sir Ben Ainslie approached us, asking to become his new team’s first sponsor and to help bring sustainability onto the America’s Cup stage. His commitment to embed the ethos of 11th Hour Racing into the DNA of Ben Ainslie Racing (now Land Rover BAR) as the team’s exclusive sustainability partner mirrors his resolution to win the 2017 America’s Cup. And the team’s success is already visible — on the race course, in the marine industry and beyond."

Ainslie is certainly on the same page.

"It was clear to me when we launched the team that we could make a real difference — to operate sustainably, protect the marine environment and positively impact the people and local businesses we needed to build a winning team," he said. "With the help of our first commercial partner and exclusive sustainability partner, 11th Hour Racing, we’ve set up Land Rover BAR to be one of the most sustainable sports teams on the planet."

What kind of help does 11th Hour Racing provide Land Rover BAR, in addition to financial, through its sponsorship?

Again, Pochman weighed in: "We work with the team to meet the ambitious standards we set together: challenge and change practices in technology, procurement, energy production and use, efficiency, economy, community and legacy. We collaborate closely with Land Rover BAR to implement solutions to overcome or mitigate environmental issues, and promote change — and we believe this is fundamental to creating the strongest team possible in our quest to win the America’s Cup."

With an exclusive sustainability partner on board, Ben Ainslie Racing turned to the technical requirements necessary to win — all while pushing the sustainability envelope. It needed to find a partner with stellar design and technical know-how and a best-in-class commitment to the environment.

In the case of Coventry, U.K.-based Jaguar Land Rover, Ainslie didn’t have to look far.

With its Above and Beyond ethos, Land Rover lives and breathes advanced engineering, design and technology every day. The result has been consistent development of world-class innovations and better-performing vehicles that successfully navigate and battle the elements and terrains.

Once the partnership formed and our sustainability teams met, we realized we were all on the same wavelength.

Of course, world-class racing boats also fight the elements. This helps explain Land Rover’s longtime involvement in sailing. A pairing of Land Rover and Ben Ainslie Racing in a title and exclusive innovation partnership thus appears to be a tight, organic fit.

Sustainability’s central role in Land Rover’s business tightens the organic nature of the partnership: from using Life Cycle Assessment to an aggressive commitment to reduce carbon emissions (30 percent in manufacturing processes by 2020), Land Rover and Ben Ainslie Racing share best-in-class sustainability track records and a desire to raise the sustainability bar ever higher.

According to Ian Ellison, sustainability manager, Jaguar Land Rover, "Once the partnership formed and our sustainability teams met, we realized we were all on the same wavelength. We instantly knew that we all share a passion for environmental innovation and have plenty of common ground to work on as we work together to bring the cup home." And, since Low Carbon signed on to become Land Rover BAR’s Renewable Energy Partner last year, some of that electricity is being generated and used on site, at the team’s headquarters in Portsmouth that was built to BREEAM (U.K.’s version of the USGBC’s LEED building rating system) standard.

Low Carbon Marketing Director Quentin Scott sees the Land Rover BAR partnership as being at the forefront of sustainability in sport — something he hopes is emulated by other sporting organizations in the U.K.

"Sporting organizations have a privileged position in society, with the potential to influence fans and the next generation of talent," he said. "There is a real opportunity for the sports industry to lead the way in making sustainable changes in 2016. In particular, we want U.K. renewables to play a part in the bid for a high profile U.K. sporting success story."

The global communications company signed on last fall as technology in sustainability partner. This followed shortly after the two organizations joined forces to launch 100% Sport, a global initiative to inspire sports fans around the world to take action to tackle climate change and reduce carbon emissions by switching to renewable electricity.

"BT is a communications services company with a long history in environmental sustainability," she said. "BT is also a sports broadcaster of world-class sports and owns the rights to air the America’s Cup exclusively live on BT Sport. We learned about Land Rover BAR’s great environmental drive and commitment to sustainability and felt this aligned greatly with BT’s own environmental aims and ambitions. The partnership with Land Rover BAR not only gives us a great, credible face for the #go100percent campaign but also allows us to utilize our technology and showcase the team’s great work through our channels to inspire others." 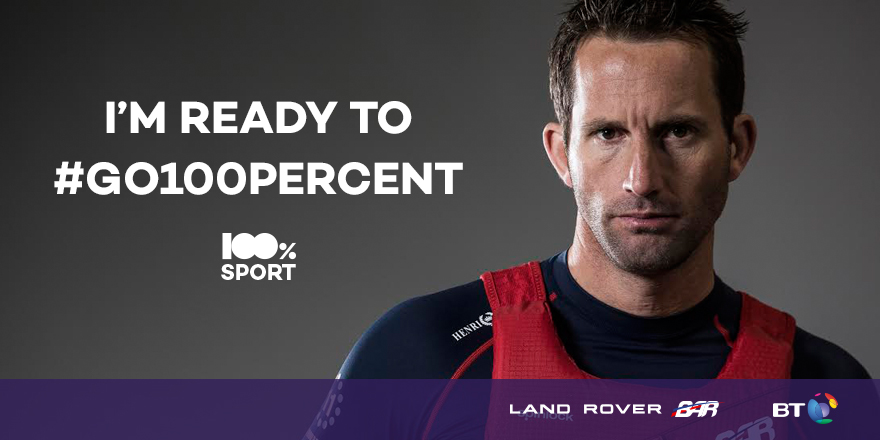 Ainslie described his feelings on the BT partnership: "I am honored to be an ambassador for this movement, and we are working hard to follow the 100-percent path. We’ve already acquired 100-percent renewable electricity for our new base and are looking at how we can deliver more in our home city of Portsmouth. Our temporary America’s Cup base in Bermuda is in the planning stages, and will include sustainability features like solar panels and rainwater collection."

Predicting the results of any sports event is a fool’s errand, but one thing is for sure: The way Land Rover BAR is combining its technology, sporting and sustainability efforts through its top-in-class partners will become a model, not only for sailing (more teams will go the sustainability route by the time of the 2021 America’s Cup) but for the broader sports world.

11th Hour Racing, on behalf of all of Land Rover BAR’s sustainability partners, will lead a session at the Green Sports Alliance Summit in Houston in June, "Harnessing the Power of Partnerships: Building a Sustainable Sports Team." The goal? Show the entire sports world how to go #SailingIntoSustainability.