Los Angeles is known around the world as the home of Hollywood stars, sunny beaches and a high concentration of luxury sports cars and designer clothes.

But the sprawling city, home to some 3.8 million people, is also famous in urban planning circles for some less flattering idiosyncrasies: a history of intense water wars, smog and gridlocked traffic among them.

In a nod to both enduring environmental obstacles and long-standing divisions between rich and poor residents, the City of Los Angeles on Tuesday will release a first-of-its-kind sustainability framework, laying out concurrent short-term, 10-year and 20-year goals.

Among the city's most ambitious objectives: becoming the first large U.S. city to hit zero waste by 2035; attracting $2 billion in private clean tech investment by 2035; a 75 percent increase in the greenhouse gas efficiency of the local economy by 2035; slashing water imports to source 50 percent locally by 2035; cutting emissions 80 percent below 1990 levels by 2050. 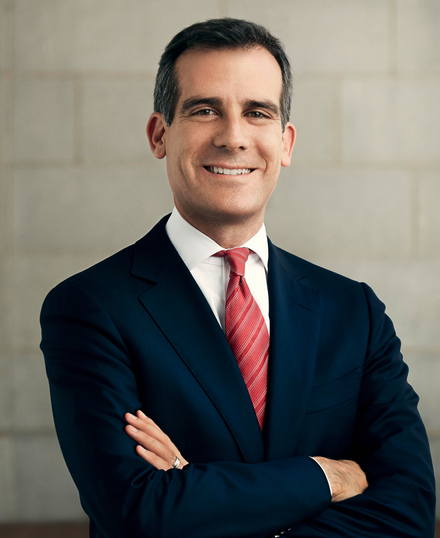 LA Mayor Eric Garcetti, who previously hired the city's first chief sustainability officer and has championed a new pLAn framework for growth that is environmentally, economically and socially sustainable.
“We expect at least 500,000 more people to call Los Angeles home by 2035," said LA Mayor Eric Garcetti in a letter introducing the "pLAn," as the sustainable city framework is called. "How can we improve our city today, and ensure future generations enjoy a place that is environmentally healthy, economically prosperous, and equitable in opportunity for all?”

One key example is the way the city intends to approach housing and transit through the dual lenses of sustainability and social equity.

LA is already in the process of implementing a massive $40 billion transportation overhaul, and the new pLAn includes a goal for the traditionally car-addicted city to reduce per capita vehicle miles traveled 10 percent by 2035. At the same time, the city is looking to avoid further sprawl and volatile housing affordability issues already impacting cities like San Francisco and portions of Southern California, pushing LA to follow the advice of urban planners pushing transit-oriented housing development.

As part of the pLAn's goal to add 150,000 new housing units by 2025, LA is aiming to reduce "rent-burdened" homes — those spending a disproportionate amount of income on housing — by 20 percent. State cap and trade environmental legislation provides funding for housing (in particular affordable housing) near transit, aligning the city's housing, transportation and climate goals: 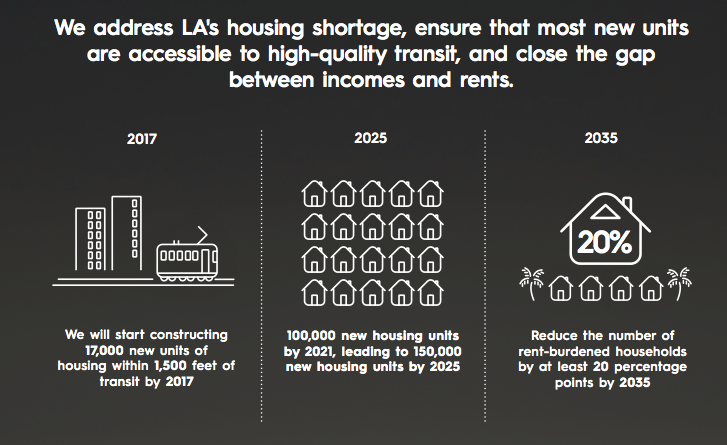 Still, the new plan must also be put in context. While LA has undoubtedly has come a long way from the skyline-obscuring smog of the 1970s, Los Angeles County just this week earned a C+ on a University of California, Los Angeles (UCLA) environmental health report card.

Continued poor air quality and polluted water were the two main drags on the area's score, though the study found additional room for improvement when it comes to energy use, emissions and waste.

Felicia Federico, a researcher at UCLA's Institute of the Environment and Sustainability, also pointed out “enormous data gaps” and instances where relevant variables “aren’t measured at all,” according to a report published by local newspaper the Pasadena Star-News.

“As a region, we need to decide what the most important environmental measures are that we want to track and determine how we will do so regularly,” Federico told the Star-News.

Upping the ante on sustainable business

For a metro area with an $860 billion gross domestic product and 5.7 million jobs, the role of the private sector in the new pLAn sustainability framework isn't explicitly outlined.

Familiar references to public-private partnerships, energy financing mechanisms and recruiting green enterprises are all included in the plan, but what's less clear is how much of the heavy lifting to meet new goals will be required of businesses operating in the area. 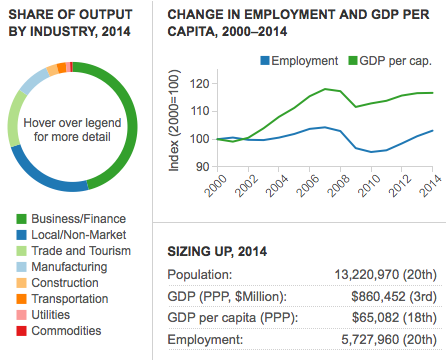 A snapshot of the Los Angeles metropolitan economy, per the Brookings Institution.
In some sectors, new sustainability goals — like achieving 25 percent zero-emissions vehicle adoption and 5 percent shared transportation services by 2035 — present clear opportunities for companies selling electric cars or EV chargers or ridesharing platforms like Uber and Lyft.

Though that's still a drop in the bucket compared to multibillion-dollar Silicon Valley startup valuations, the pLAn includes a goal to add a total of 150,000 new green jobs in fields like clean tech, solar installation to transit infrastructure by 2035. That's in addition to a goal of reaching a much more substantial $2 billion in private sector green investment (though both "green jobs" and "green investment" are fairly vague categories).

Doing business with the government itself is also an option, as lighting giant Royal Philips has discovered. Also on Wednesday, the company will announce that LA will becomes the first city in the world to control its street lighting through a new mobile and cloud-based management system called CityTouch.

LA previously converted 160,000 street lights to more energy-efficient LEDs, which left the city with a new opportunity to collect and analyze energy data, illustrating one facet of the much-discussed "smart cities" push. No pricing for the service was disclosed in a news release.

“LA has more LED street lights than any other city in America,” said Ed Ebrahimian, director of the Bureau of Street Lighting for the City of Los Angeles, in a statement. “This required a solution that would allow us to remotely control street lights and accurately report how much energy each light is consuming."

Beyond similar opportunities to grow market share in a city shifting to be more sustainability-oriented, the new pLAn document raises familiar questions about how the public and private sector can or should come together to achieve significant reductions in environmental impact.

Unconventional metrics, like reducing by 75 percent the 44.5 metric tons of carbon dioxide emitted per $1 million of area GDP by 2035, are one example of a low-carbon economy initiatives that will likely require joint action:

Other across-the-board cuts, like increasing by 95 percent the amount of waste diverted from the landfill or sourcing 50 percent of water locally — both by 2035 —  could likely be hugely expedited by corporate buy-in, rather than reliance on per capita reductions.

And that tension between grasroots and industrial-scale change is already a hot topic at the state level in California. Historic drought regulations last week largely left major industrial sectors like agricultural and fossil fuels off the table, instead asking other residents and businesses to cut back on water use.

While that tension remains far from settled, the pLAn report attempts to drive home the urgency of the issues at hand for all involved:

"We will either do our share and come together with other Mayors to avoid the catastrophic impacts of global climate change — or continue making the planet hotter," the authors wrote. "We will either ensure all our residents can find safe, attractive and affordable housing with many options for moving around our vast region — or we will forever be playing catch-up in our efforts to create a truly livable city for all."

Much ado has been made about the process of setting sustainability goals in both the public and private sectors, like how to base them off of science, how ambitious to make them, what happens if they aren't met, etc.

While not delving too deeply into the process of how the goals were established, LA's new sustainability pLAn provides several mechanisms to move the objectives from urban planning theory to implementation.

The effort announced on Wednesday will build on Mayor Garcetti's appointment last year of the city's first chief sustainmability officer, Matt Petersen. In his opening letter in the pLAn, Garcetti notes that there is no traditional "environment department" in LA, but rather the city has dispersed the function through all 35 departments — mirroring the private sector trens toward more integrated sustainability.

"One of the initial action  steps within the pLAn is the appointment of a Chief Sustainability Officer within 18 key departments,” Garcetti wrote in the new document. "I intend to use the pLAn as a tool to manage the city."

The pLAn also calls for more targeted working groups, like a "water cabinet," along with better data collection efforts.

In terms of accountability, reviews of city departmental heads will be tied to meeting goals set forth in the pLAn, and several annual reporting requirements will be added. Funding for programs related to sustainability goals, "will receive priority in my annual budget process," Garcetti added.

Perhaps unsurprisingly given the financial strain on city coffers following the recession, funding for many programs remains murky. No total price tag is attached to projected implementation of the pLAn, which Garcetti frames as an endeavor much broader than your average city planning exercise.

“The pLAn is not just an environmental vision," he said. "By addressing the environment, economy and equity together, we will move toward a truly sustainable future."