Last year was a record one for renewable procurements, with new U.S.-based capacity topping 10 gigawatts.

This week, the Renewable Energy Buyers Alliance (REBA) released its annual State of the Market, a report that summarizes trends and observations related to corporate clean energy procurement.

The high-level takeaway: Despite the turmoil of 2020, including a pause on projects at the start of the pandemic in the spring, clean power purchases remained a high priority for corporate buyers.

"Projects slowed but didn’t stop," said REBA CEO Miranda Ballentine during a virtual presentation of the report’s findings. "The momentum grew throughout the year."

Last year was a record one for renewable procurements, with new U.S.-based capacity topping 10 gigawatts. The year was bolstered by the last quarter, when transactions related to almost three-quarters of the year’s capacity were signed. That momentum is carrying into 2021, according to REBA, with deals announced in the first quarter exceeding the total annual capacity of each year prior to 2018. 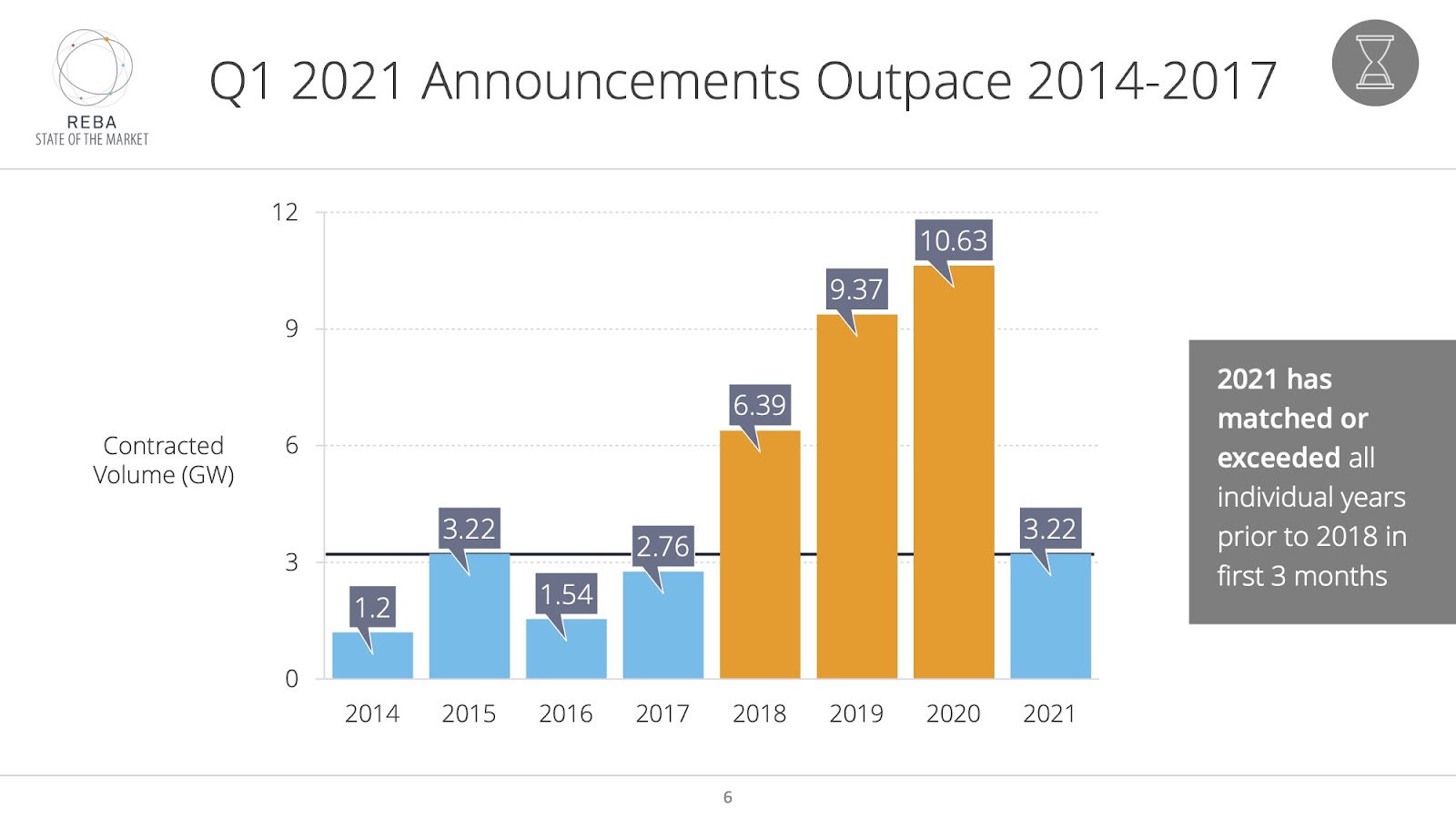 Here are three State of the Market findings that illustrate how the renewable energy market is growing, maturing and strengthening.

Increasingly, more types of companies are joining the party. Last year, nearly half of the companies that inked renewable energy deals were newcomers. Since 2008, there have been 120 buyers, according to REBA. 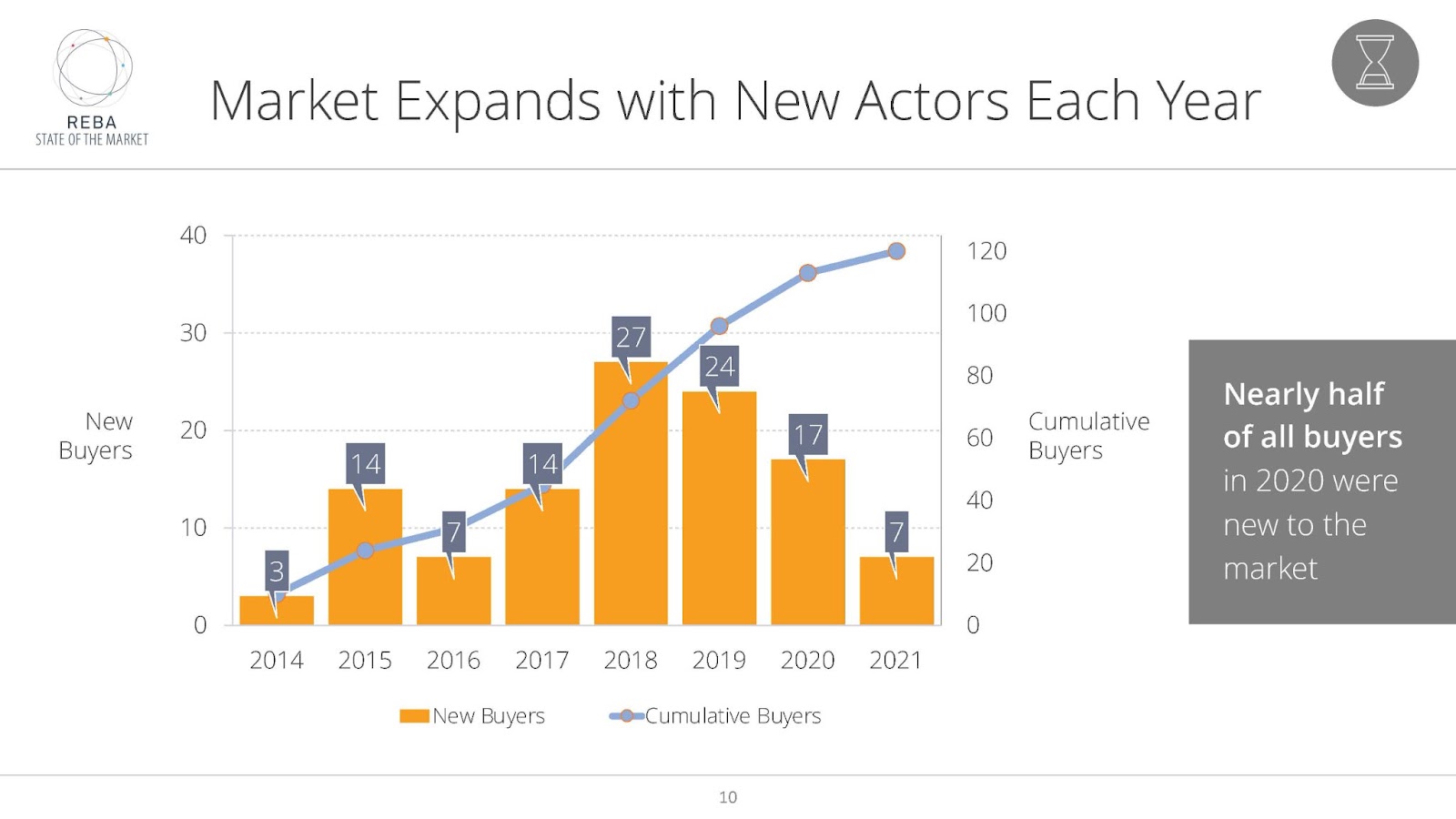 Notably, companies in heavy industry — steel and heavy machinery — are beginning to sign onto renewable energy. Last year, there were eight new industrial buyers, according to REBA, and the total capacity procured by that sector more than doubled from the year before, with capacity growing from 511 MW in 2019 to 1,344 in 2020.

The fact that heavy emitters are procuring renewable energy is a big deal. Industrial emissions represent a third of the global total, and it’s long past time for these sectors to decarbonize. The industrial early movers — such as steel manufacturers Evraz North America and Nucor Corporation — are playing an important role in spurring forward a market for cleaner products.

Many corporate energy buyers are looking to do more than just deploy additional clean energy. They want to make sure it is driving decarbonization in the power system.

This is a shift in thinking — from projects’ outputs to the outcomes. While many companies originally may have been motivated to buy solar or wind power as a way to achieve internal 100 percent renewable energy goals, net-zero commitments are encouraging clean energy buyers to look at the larger emissions picture.

Buyers are deploying different strategies to optimize decarbonization, including considering the location of new deployments. A solar power purchase agreement in a market with a dirtier energy makeup, for example, will have better emission reduction impacts than one sited in a relatively clean service territory.

Efforts to decarbonize have fueled the rise of procurement deals that include energy storage. Also powering that trend are cheaper energy storage prices. The cost of batteries has dropped 88 percent since 2010, making storage a more accessible option for long-term energy contracts.

The benefits of adding storage to renewable energy projects are clear: It allows for deeper decarbonization, adds resilience and firms up the resources, helping an installation provide energy even when the intermittent wind and solar assets stop production.

As the cost of energy storage continues to decrease and companies work to get more value from their clean energy procurement strategies, such deals are sure to be more common. 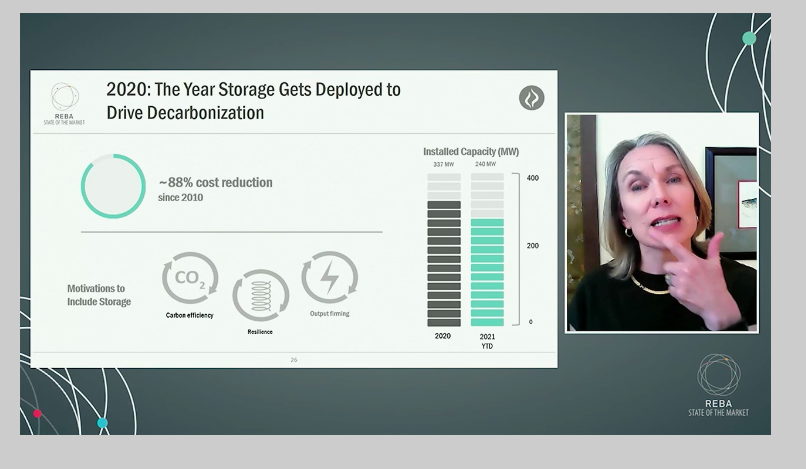 3. Companies are considering the human impact of clean energy procurement

As more contract models and structures emerge, corporations are able to use more sophisticated criteria when signing long-term deals.

This strategic lens can be used to assess upstream impacts, such as an energy company’s labor practices or a solar panel manufacturers’ material sourcing. It also can be used to ensure renewable energy deployments are supporting the local community and are creating good-paying jobs that support diversity, equity and inclusion. 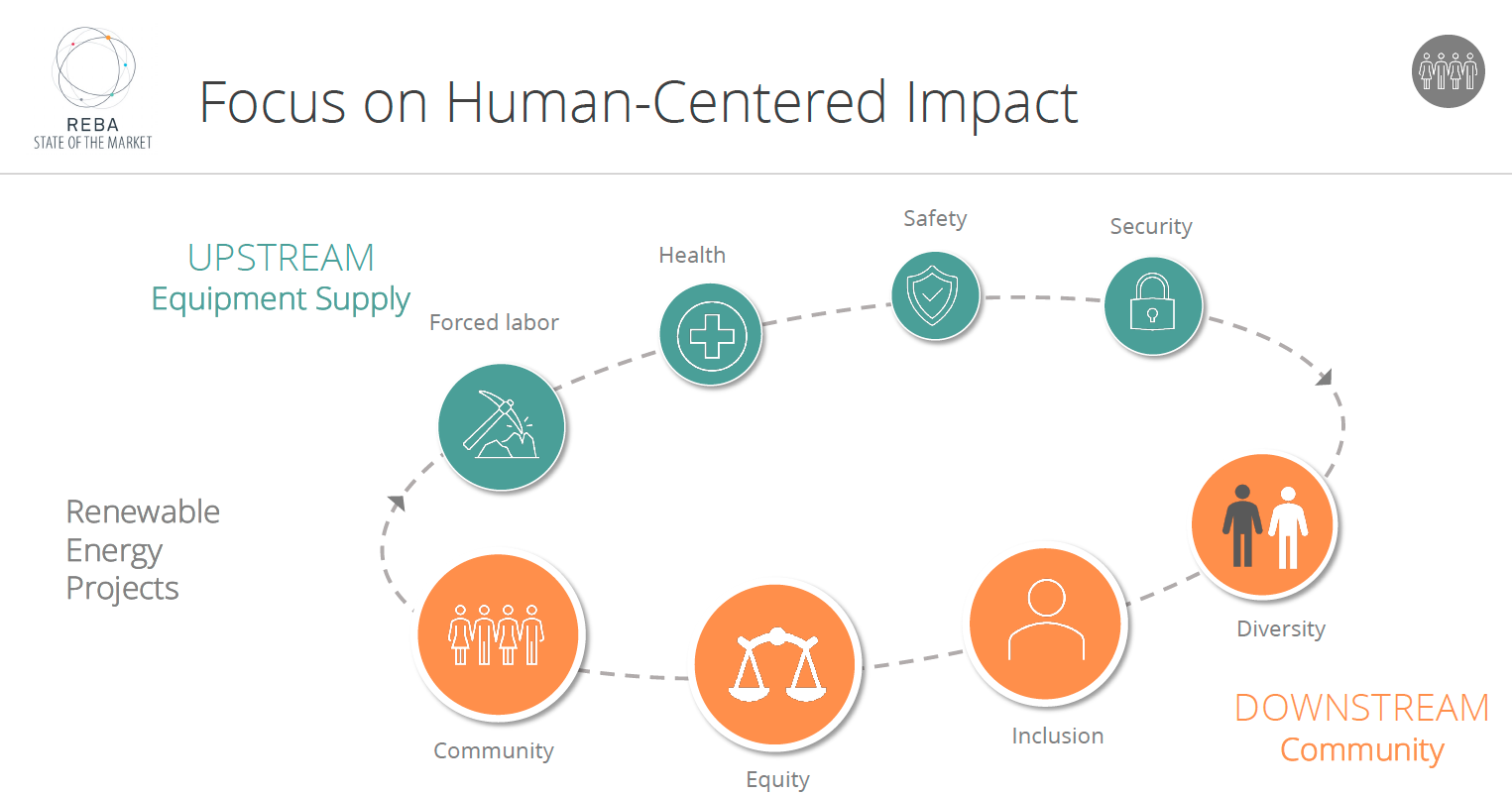 Last year, Salesforce released a report, "More Than a Megawatt," that outlined best practices for renewable energy buyers. The report was written with input from nine NGOs (including REBA), and outlined considerations such as land use planning, community engagement and avoided emissions.

The report, and the State of the Market highlighting this trend, reflect the feedback loop between the desires of buyers and the maturation of the market. With the support of climate and community-focused NGOs, corporate energy buyers are signaling to energy developers and service providers what options they would like available into the future. Through providing these offerings, new buyers are more likely to prioritize them. And a virtuous cycle is born.

Of course, REBA isn’t a neutral observer of these trends. The NGO has an agenda: a mission to accelerate the renewable energy market and catalyze 60 GW of capacity by 2025. While the goal seemed bullish when announced just two years ago, REBA is 65 percent of the way there, showing how quickly the market has grown.

In this way, the new State of the Market report isn’t just an objective reflection of corporate procurements. Rather, it’s a signal to energy buyers about what the market could become and if they align priorities. And when it comes to the next generation of corporate procurement, energy buyer trendsetters are pushing for more than quantity; they’re pushing for quality.