Leaders Who are Turning the Tide to Health and Sustainability

Even though they were a wildly diverse group, the stories they told had common threads. Radical transparency, disruptive innovation and policy alignment were reccurring themes at the Turning the Tide conference last week near San Francisco, a forum that strives to connect human health and environmental health issues while exploring bold steps to affect societal change.

The speakers were accomplished leaders from five fields: Integrative medicine, business, sustainable communities, environmental conservation and the media, and the conference provided an expansive view of how those sectors influence one another.

Driving disruptive innovation in healthcare is Andrew Weil, a pioneer in integrative medicine among Western-trained physicians and founding director of the Arizona Center for Integrative Medicine. Weil has trained over 700 practicing physicians through a fellowship program, and his philosophy places emphasis on the body's self-healing capacity, mental and spiritual health and its relation to the physical, the restoration of the patient-doctor healing relationship and a broad array of therapeutic options.

Weil is developing and implementing integrative medicine programs for "family practice" medical residencies with the intent of having the programs eventually included in all residencies. Ultimately, his goal is to have integrative medicine taught as part of the medical school curriculum, changing the current emphasis from "disease-management" to a wellness and prevention model.

Weil, along with other featured physicians including Dean Ornish, founder of the Preventative Medicine Research Institute, echoed this need to revamp the health care system. The panelists explored how public policy has unwittingly helped to spur the increase of cheap and unhealthy food reliant on the fat-sugar-salt trifecta by subsidizing the corn and soybeans, used to make high fructose corn syrup and refined soy bean oils that are key culprits in the obesity and food-related health epidemics. Solutions emphasized by the panelists included the need for governmental policies that support and incentivize the growth and production of healthy food, not make it less competitive.

{related_content}But there are far more than policy-related hurdles to healthy food and lifestyles. The physicians at Turning the Tide described how medical schools do not teach nutrition in a substantive way; how most hospitals do not actively promote healthy lifestyles -- 47 percent of U.S. hospitals have fast food outlets on their premises! -- insurance companies don't reimburse doctors for wellness consultations, but do for disease treatments; and even how a significant percentage of hospital revenue is derived from technology-centered procedures for cardiovascular disease, so that changing treatment patterns means reconfiguring the business model.

The brightest spot on the horizon is the fact that people who have access corporate wellness programs have lower medical costs. Because most large corporations are self-insured, they find plenty of incentives to encourage healthier lifestyles among their employees.

The physicians discussed the theme of radical transparency in food labeling and the possibility of a food rating system to shape food choices. But it was another speaker, former advertising executive Alex Bogusky, who spoke of how startup company GoodGuide is the embodiment of this concept.

GoodGuide is led by a team of Ph.D's from MIT and the University of California and other professionals who had worked at data-driven companies like Google and Amazon. The site rates packaged food items, household cleaners, personal care products and toys on a 10-point scale for their impact on personal health, the environment and society. The depth, breadth and accessibility of the data are unprecedented; it is offered free online and on mobile devices, enabling shoppers to make sustainable purchasing decisions from the supermarket aisles.

The GoodGuide example shows how radical transparency can affect not only food choices but the business sector at large through a feedback loop of informed consumers steering companies toward healthful products and strategies by their purchases. But because this data-rich model may not appeal to everyone, disruptive innovation and public policy need to evolve in tandem.

The CEO of Serious Materials, Kevin Surace, reminded the audience that building operations and material manufacturing are responsible for 52 percent of the world's greenhouse gas emissions. He also highlighted the little-discussed fact that 80 percent of all building materials come from China, where production costs are cheaper due to the lower environmental, health and human rights standards.

Surace offered the recent episode of toxic drywall from China that found its way into Florida homes as a perfect example of the sector's systemic problems and the need for policy to promote or require sustainable manufacturing in the U.S.

Surace believes the U.S. building industry is ripe for change in part because the current, government-backed Energy Star labels do not require high enough efficiency standards -- much higher levels of efficiency are possible with current technologies, Surace told the crowd. Serious Materials won the bid to replace the 6,500 existing dual-pane windows in the Empire State Building with super-insulating ones by reprocessing the glass onsite; this will result in a three-year payback, even though Surace was repeatedly told it was impossible.

Another example of Serious Materials' disruptive innovation is its 2009 purchase of a unionized manufacturing company from which the owners walked away; Surace uses the facility to produce energy-efficient windows, and his efforts at creating green jobs in a tough economy have been acknowledged by President Obama. 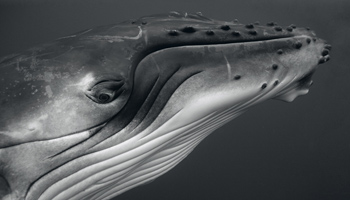 Speakers at Turning the Tide also represented environmental conservation of the oceans, rivers, and other shared open spaces (also called "the commons"), detailing how they physically engaged with what they intended to protect. For two of the speakers, radical transparency took the shape of documentary photographs or films of their efforts.

Bryant Austin made it his life's work to produce high-resolution, life-size photographs of whales that are currently being hunted in huge numbers, mostly by Japan and Norway. His photographs (a small example is posted at right; for many more visit StudioCosmos.com) are the most detailed of any taken to date and required him swimming just five feet from the whales.

Martin Strel brings attention to ecological crises by swimming the world's dirtiest rivers in their entirety. His last feat was swimming the full length of the Amazon River to bring awareness to deforestation and pollution; the documentary entitled "Big River Man" records his journey. He has also swum the Yangze, Mississippi and Danube Rivers.

Alice Waters, co-founder of Chez Panisse and vice president of Slow Food International, has created sustainable communities around healthy food. A tireless advocate of locally-grown organic produce, neighborhood gardens and healthful eating habits, she believes that children should receive "edible education" from K to 12, as the Berkeley school system has adopted.

Waters hopes public policy will support "edible education" programs nationwide to help address the high rate of lifestyle-induced disease among children. The Yale Sustainability Food Project started out as a way to provide organic, locally grown produce to her daughter's dining facility at Yale University. The endeavor quickly grew and it now manages an organic farm which provides food to dining programs across the Yale campus and supports other research and educational efforts.

Human health and environmental health are inextricably intertwined and so the solutions to the critical issues need to be connected as well. Promoting radical transparency, disruptive innovation and public policy alignment across sectors are steps in that direction.

Kathy O. Brozek is a management consultant and writer working with organizations that have a social mission, including firms focused on socially responsible investing. Previously, she held both finance and marketing positions in the financial services industry.

How Responsible Investing Can Change the Food System

How SoCap Aims to Bring a Broader Focus to Modern Capitalism

See all by Kathy Brozek