Brands from Apple to Xerox use Life Cycle Assessment. Can it blow more wind in the sails of this racing team?

This is Part 1 of a three-part series on Land Rover BAR's sustainability strategy. Read Part 2  and Part 3.

Susie Tomson, sustainability manager for Land Rover BAR, laughed modestly when she and her colleagues were termed 21st century sailing-sustainability equivalents of 1960s and 1970s NASA scientists — minus, of course, the starched white shirts and thin "just the facts" ties.

Modesty aside, what Tomson and the Land Rover BAR team, along with exclusive sustainability partner 11th Hour Racing, are doing, sustainability and business-wise, has the chance to disrupt the way sailing race teams operate, while also helping Land Rover BAR win the 2017 America's Cup. In other words, it's like an Apollo program for sailing. How are they doing this?

It starts with Life Cycle Assessment (LCA), a technique that assesses the environmental — and financial — impacts associated with all stages of a product's life from cradle to grave (for example, from raw material extraction through materials processing, manufacture, distribution, use, repair and maintenance, and disposal or recycling).

When the team was forming, its goals were clear: Win the 2017 America's Cup in Bermuda and do so in the most environmentally, socially and financially responsible way possible.

Over the last five to 10 years, the LCA approach has been adopted by a wide variety of iconic companies, from Apple to Unilever; Levi Strauss to Xerox. The sailing industry? Not so much. So why did Land Rover BAR decide to take the lead?

Because skipper Sir Ben Ainslie and Land Rover BAR felt that being the most sustainable sailing team would make them the most efficient, financially and on the water. And doing so would help make its playing field — the oceans — cleaner, healthier and more hospitable to the sport.

Thus, when the team was forming in 2013, its goals were clear: Win the 2017 America's Cup in Bermuda and do so in the most environmentally, socially and financially responsible way possible. While it's easy to tell whether the boat wins the race, it's not so easy to know all of the environmental, social and financial impacts of the journey that would get the team from inception to finish line.

That's where LCA came in — as the detailed scoreboard that measured Land Rover BAR's environmental and associated financial impacts attendant to building the race boat and the support boats.

"We knew that, in addition to the race boat, we'd be building a number of test boats," said Tomson. "All would have significant material and energy inputs. It was important to us to know the carbon impacts of all of our boat-building efforts. So we started creating an LCA model for the boat-building process from the very beginning. "

Here's how the LCA helped the Land Rover BAR team with its race boat and two types of support boats.

The race boat database is made up of more than 170 materials, with an embodied carbon (a measure of carbon emitted into the atmosphere in order to produce and operate something) and financial cost for each. The LCA model integrates data from all of the processes, from the design phase through construction, use and finally the end-of-life options to calculate the total embodied carbon.

The LCA model integrates data from all of the processes, from the design phase through construction, use and finally the end-of-life options to calculate the total embodied carbon.

This, added Tomson, would allow the team to, for example, "determine if it is better to use an eco-resin transported from China or a fossil fuel-based resin made nearby."

When the Land Rover BAR team applied the LCA model to the design and construction phase of the prototype, it found that the molds offered the most room for carbon footprint improvement because over 90 percent of total materials were used in their production. I

f the team could use molds made of recycled materials or natural fibers, that would have a positive effect on its embodied carbon numbers. Problem was, per Tomson, "many composite material suppliers didn't know the carbon profiles of their products." 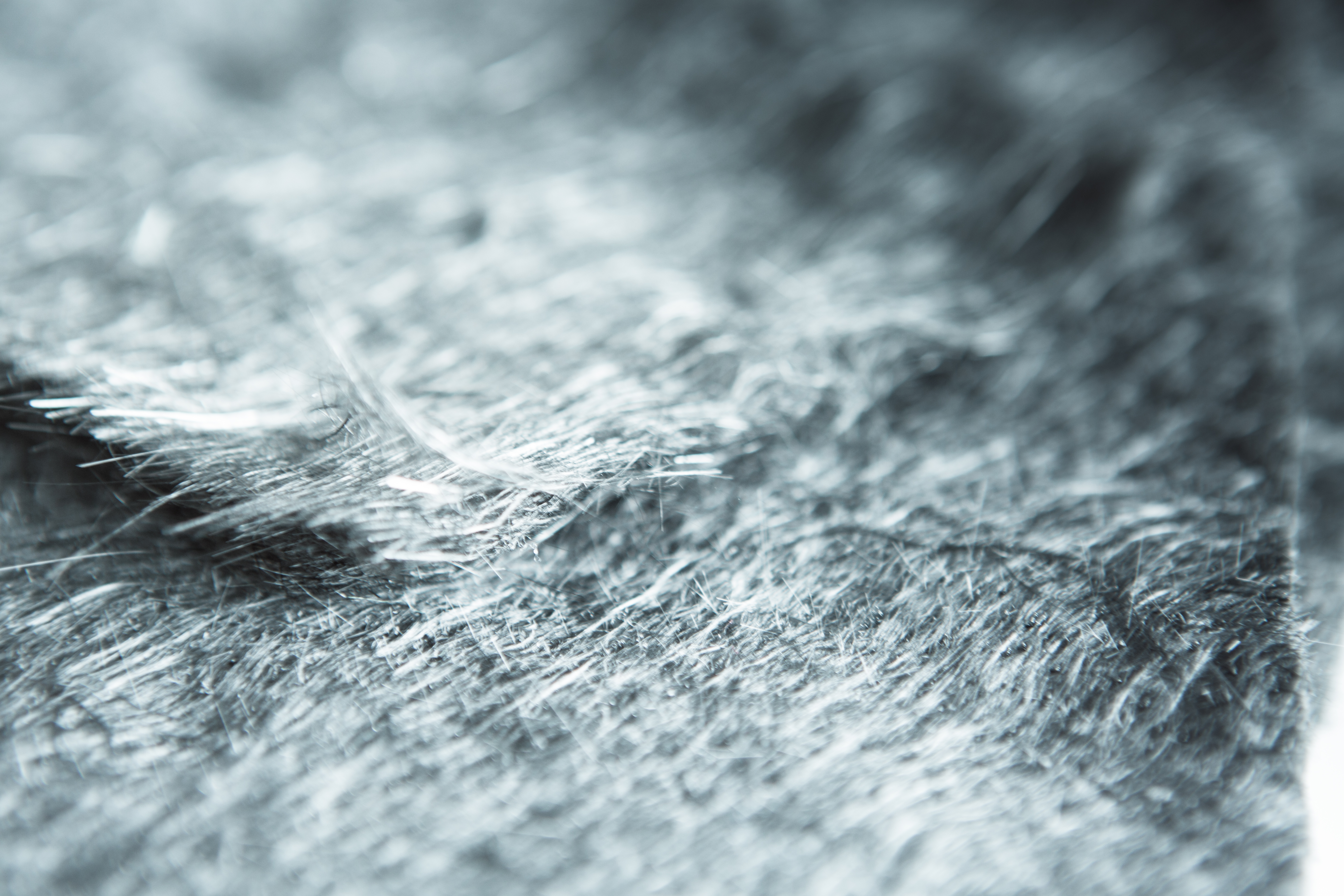 So the team set about testing varying quantities of recycled and natural fibers in the molds and measuring the benefits. Trials of recycled composite carbon fiber, the molds' primary material, were particularly important (increase recycled carbon fiber use, lower environmental and financial costs) — and challenging.

"We contacted all of our carbon fiber suppliers," said Tomson, "asked them how the product is made from an energy input standpoint. Many don't know." So the team researched the carbon fiber production process and made its own estimates.

"LCA showed, by using recycled PET plastic core, natural flax fibers in the floor and a bio-based resin, we could save 1.5 tonnes of carbon and save 20 percent on cost," said Tomson. "In fact, flax has an embodied carbon number that's 95 percent less than carbon fiber." 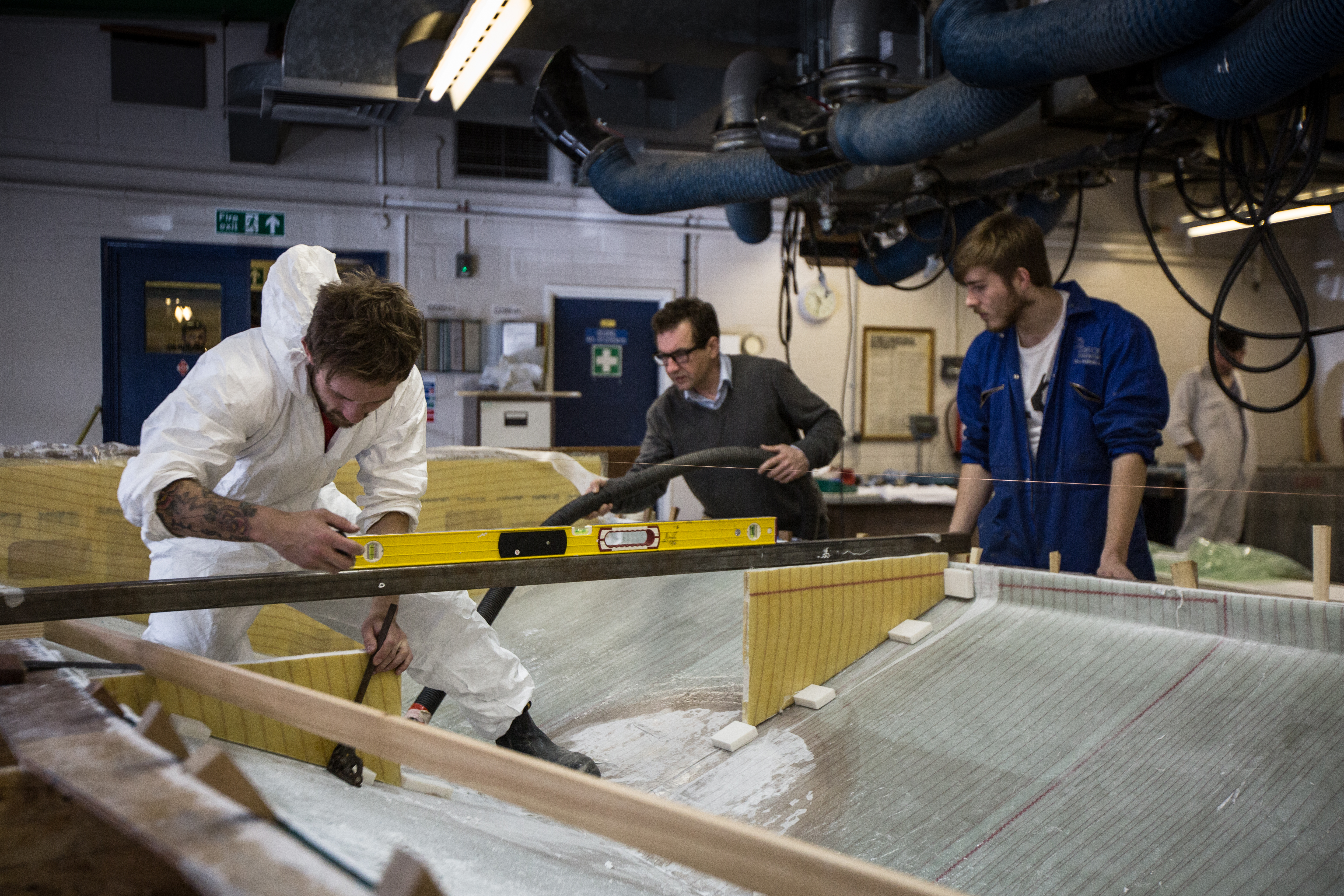 For its support chase boats, the design team took on the challenge of reducing fuel. The new chase boat design, now in the concept stage, would cut fuel consumption in half.

"These boats must be fast and powerful — often in the face of 40-knot winds," Tomson added. "The LCA model helps us see the impact of reducing weight in the boat, which minimizes petrol use. Land Rover itself uses LCA to achieve the same goal — less weight, greater fuel efficiency — with its vehicles."

According to Land Rover, the design, engineering and LCA aspects of its partnership with Ben Ainslie Racing benefits both the automaker and the sailing team.

The goal is to produce a blueprint all marine companies can use to integrate LCA into their operations, thus making the industry much more sustainable, innovating toward success.

On the one hand, Land Rover lends its automotive knowledge and expertise, specifically around aerodynamics and data management, to help accelerate innovation breakthroughs for the sailing team. On the other, the partnership affords Land Rover the opportunity to share creative thinking with, and apply key learnings from, leaders of the marine industry in ways that will enhance new auto development.

According to Tomson, the answer is mostly yes: "The cost of recycled carbon fiber is much lower than virgin fiber; however, recycled fiber uses more resin which we have not precisely quantified. No matter the amount, we’d use a recyclable resin, which is more expensive than regular resin.

"Finally, the cost of disposal and recycling will be much lower — in the U.K. you have to pay landfill tax for something that is not recyclable. So, while there’s more expense in the resin system, carbon fiber costs less, and disposal is cheaper. So overall, a more carbon efficient boat also should cost less."

The rest of the sailing racing world has yet to take Land Rover BAR's sustainable LCA tack. That likely will change as news of the team's improved environmental and financial performance spreads. That change will accelerate if Land Rover BAR wins the 2017 America's Cup — for Britain and for the oceans.

Jeremy Pochman, president of 11th Hour Racing, Land Rover BAR's exclusive sustainability partner, sees the team’s and his organization’s use of LCA as a springboard to something much bigger — a sustainability moonshot for the marine industry.

"We are excited to bring our expertise, credibility and critical thinking to ensure the team delivers on its environmental and financial goals," said Pochman. "The goal is to produce a blueprint all marine companies can use to integrate LCA into their operations, thus making the industry much more sustainable, innovating toward success."