Is commercial trucking about to get its own version of the LEED treatment?

In hopes of replicating the standardization model that has overhauled green building, the primary U.S. industry association for commercial vehicle fleet managers this week unveiled a tiered rating system for evaluating and publicizing environmental performance.

The NAFA Sustainable Fleet Accreditation was produced by NAFA, a fleet management association, with help from the CALSTART sustainable transportation advocacy group. The accreditation aims to “bring clarity, definition and recognition for what sustainability means for fleets.”

Though the fleet industry is definitely not known for leadership on environmental stewardship — with several fleet companies recently fighting California’s low-carbon fuel standard and cap and trade law — there are nonetheless some frontrunners in the field.

Numerous cities also use bio-gas fueled transit buses, while some taxi services now dispatch hybrid vehicles. Big consumer goods companies such as Coca-Cola and Frito-Lay have also started to invest in electrical vehicle fleets in tandem with automakers like Nissan wading into the commercial EV market.

Still, the nascent shift to greener fleets has a long way to go to reach the scale and visibility of LEED building standards.

And while U.S. hybrid vehicle registrations in both the consumer and commercial markets grew 15 percent last year to 3.2 million, according to IHS Automotive, that is still less than 2 percent of the estimated 250 million vehicles registered in the U.S.

“The environmental and rating system for buildings known as LEED has established some clear guidelines and encouraged strong voluntary action in the built environment," said John Boesel, CALSTART president and CEO, in a statement. "We hope these standards have a similar impact on the fleet sector.”

In an email interview with GreenBiz, Boesel said the standards have big ambitions. "Over time the scoring requirements are aimed at meeting an 80% reduction in ghg's by 2050," he said, even while there are currently no rules or regulations requiring fleets to take such actions. "For the first time, however, this accreditation system will give fleets clear targets and an ability to be scored against a trajectory that gets us to the 80% reduction by 2050."

The NAFA Sustainable Fleet Accreditation standards include four tiers and are based on improvement. They recognize concrete, measurable improvement in reducing average emissions in a fleet, increasing fuel efficiency and reducing fuel use per vehicle: 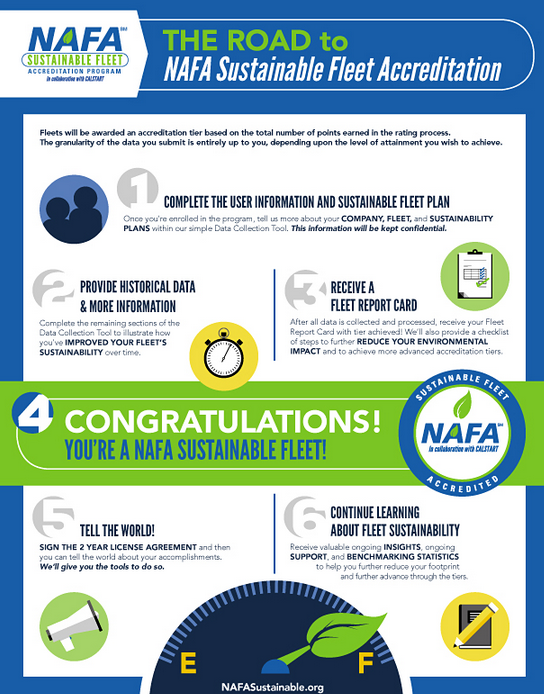 "Fleets start at any level of activity — the point is to start down the path: first by baselining where they are, then by validating their progress and finally by benchmarking themselves against rigorous standards and the actions of their peers," said Bill Van Amburg, CALSTART senior vice president. "With this new program, fleets will be able to measure, manage and improve."

NAFA and CALSTART said they standards can be applied to fleets of all size vehicles, from cars to big rigs.

The move also follows President Barack Obama's recent executive order pledging that the U.S. government will cut greenhouse gas emissions by 40 percent over the next decade.

That order states that federal government fleets — which include some 650,000 vehicles — will cut emissions by 30 percent during that period, slowly switching out passenger vehicle fleets so that half of such federal vehicles are zero-emissions or electric vehicles by 2025.