From new financial frameworks to updates of existing funding channels, resilience advocates are getting more specific about paying for sustainable infrastructure.

Think of it as LEED for resilience — but with the added bonus of lowering your insurance rates.

Rooted in a set of 194 requisites and credits, similar in structure to the U.S. Green Building Council's LEED reference guides, the resilience standard likely will operate on a 1,000-point scale and offer three or four levels of certification.

The credit catalog offers participants points for everything from studying short-term hazard preparedness to installing back-up power systems or growing food on site.

“It turns out there’s not really any good protocol for underwriters to value the green and resilient attributes of a project,” Doug Pierce, a senior architect with Perkins+Will and creator of the new standard, told GreenBiz. “Its even bigger task is to open up a conversation about ecologically based design.”

By demonstrating resource efficiency and safeguards in place for an emergency, the idea is that insurers, loan officers and credit raters will reward those who meet the standard with greater confidence and lower rates.

Every once in a while — and more often than usual, of late — one big, seminal disaster, such as Hurricane Katrina, provides a stark reminder of what happens when humdrum infrastructure fails.

In the case of New Orleans, underfunded pump and levee systems compounded the fallout from an already devastating hurricane.

In that instance and others like it, the conversation after the fact tends to focus on criticizing the engineers, government officials and disaster relief agencies who failed to expect it all to crumble under pressure. That's understandable, but more ingrained forces are also at work: a lack of incentive to be proactive rather than reactive; laws that actually inhibit smarter rebuilding; and historic dependence on “gray” infrastructure.

There's also one big common thread: A sentiment somewhere between dread and helplessness when it comes to who actually will pay for more resilient infrastructure, from office buildings to roads, hospitals, schools and bridges.

“We are pushing the bill down the road,” Robert Traver, director of the Villanova Center for the Advancement of Sustainability in Engineering, recently told me. 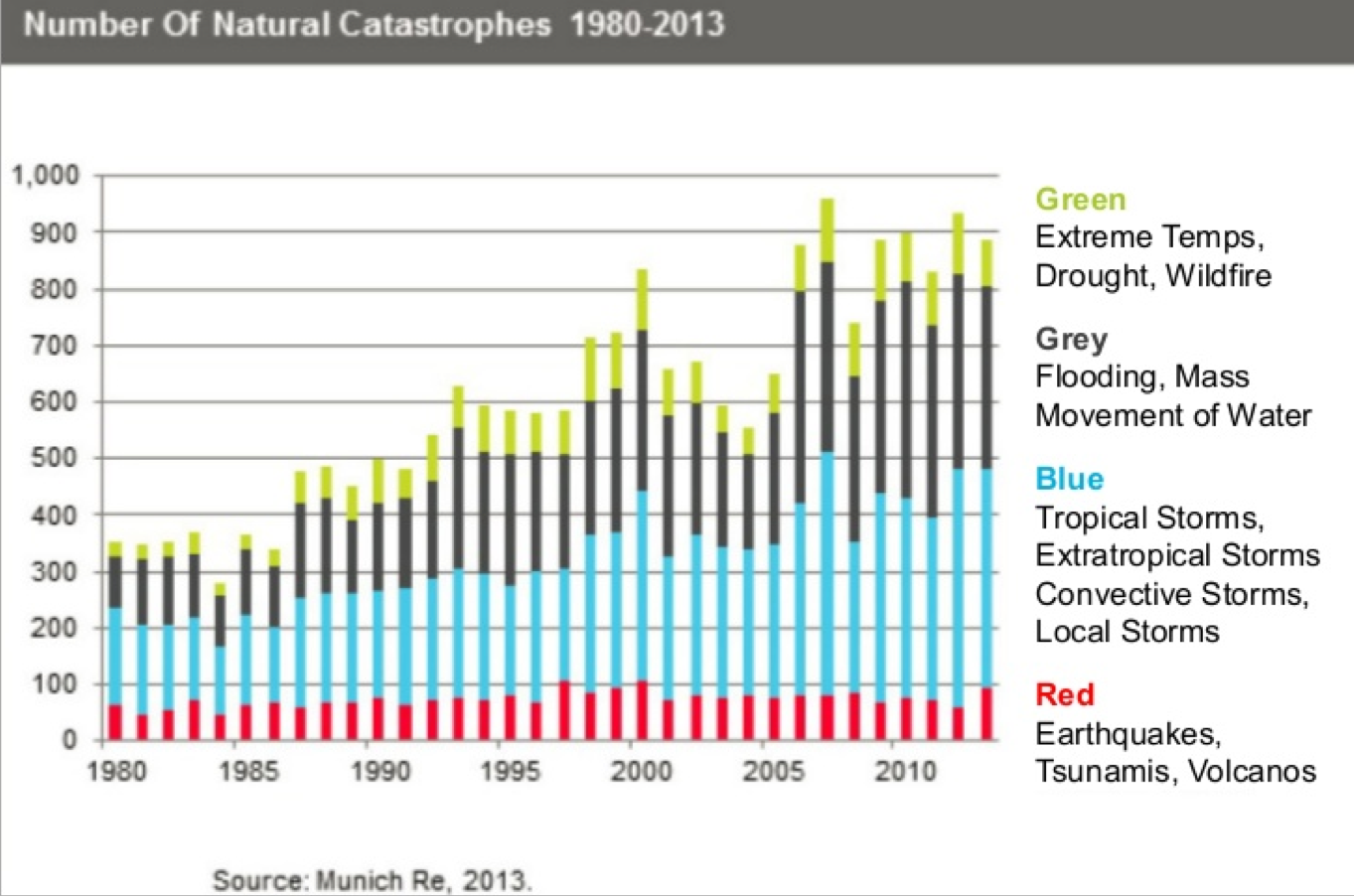 While city planners and businesses in vulnerable areas hope they aren't called on their bluff when it comes to the various shocks that could put dated infrastructure at risk, the underlying problem continues to get worse.

The American Society of Civil Engineers gives the U.S. a cumulative D-plus on infrastructure. The bill to shore up roads, bridges, dams and other resources approaching the end of their expected lifetime by 2020 stands at $1.7 trillion.

As high as the barriers to entry may be for large-scale infrastructure projects, analysts are also expecting an uptick in deal flow.

Recognizing that cash-strapped cities — and an industry of risk adjusters, loan officers and insurance companies — increasingly seek creative ways to finance more adaptable infrastructure, a number of companies and organizations are working to make the economics of resilience more favorable.

Governmental agencies are reevaluating requirements (PDF) for disaster relief funds. Existing financing tools, such as the Property Assessed Clean Energy (PACE) program, are being applied to new resilience efforts. The Rockefeller Foundation-aligned network of 100 Resilient Cities and other peer-to-peer efforts are focused on exporting what works in one market to other places with similar challenges.

A report card for resilience

With RELi, Perkins+Will is aiming to connect the dots between finance and resilience.

The result is a framework that is broad in scope, like the emerging discipline of resilience itself, incorporating environmental risks such as climate change and resource scarcity alongside issues such as food security, grid reliability and social cohesion.

“People are still trying to understand what it is,” Pierce said. “It’s moving faster on the coast. In the Midwest there’s still a fair amount of learning.”

Here's a snapshot of the interdisciplinary energy, food and water priorities included in the standard:

To bring these abstract issues to life, the firm is in the process of launching several pilots.

The District of Columbia (already a Perkins+Will client) is evaluating the standard as part of a climate mitigation plan currently in the works. Hospitals in the Southern U.S. also have expressed interest.

Perkins+Will is in talks with ratings agency Standard & Poor's about the potential of using the standard as a reference baseline to prevent downgraded credit ratings, since the agency has vowed to start factoring climate preparedness into its business.

Assuming the program gets up and running, Pierce is also optimistic about the potential to scale sustainability as part of the process — particularly as the field of green infrastructure continues to gain traction.

“Even though resiliency tends to focus on climate adaptation,” he said, “the first step toward resilience is a green building. You don’t need as many resources in an emergency.”