Adapted from "Niche Down: How to Become Legendary by Being Different," by Christopher Lochhead and Heather Clancy, published by Amazon, July 2018.

Legendary entrepreneurs are intuitive category designers. To become one yourself, open your mind to the pain points, frustrations and foibles that drive your prospective buyers nuts. Then, plot the route around them, over them or straight through them.

It starts with looking and listening.

Because new categories are created when a new problem is defined (or an existing problem is re-imagined) — and solved. No one buys a "solution" until they identify with the problem. If you can articulate that problem clearly and offer a practical way to make it go away, people will demand the solution from you.

There are two types of problems in the world that inspire new categories.

First, there is a known problem that gets reimagined and redefined. Perhaps it’s because a new generation of consumer has different expectations or an innovative new technology has emerged. Or, because someone was just super smart enough and able to view the situation from a fresh angle. Second, there is a problem we don’t know we have, that gets evangelized so well that it becomes a whole new market category. 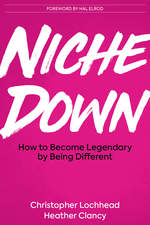 If you pause long enough to look around, it doesn’t take long to see examples of successful entrepreneurs who are defining new categories right before our very eyes in your local community, your region or on the global scene.

Take recycling, something most sane humans who care about the future of the planet would love to do religiously — but that is ridiculously complicated to figure out. The system is broken, and it’s broken in different ways depending on where you live around the world.

The problem is that the world has been trained to think of all forms of garbage as "waste," as something to be disposed of. But "waste" is a concept that has only existed for about 70 years, since the entirely human inventions of complex materials like plastics and the emergence of consumerism, and the idea that we need more and more stuff.

If you look at nature, there is no such thing as a useless output. And that was the "aha" moment for Hungarian-born entrepreneur Tom Szaky, founder and CEO of TerraCycle, a company on a mission to eliminate waste. Szaky started his company while he was a student at Princeton University. He collected nutrient-rich, organic materials like coffee grounds and banana peels and fed it to earthworms, harvesting their feces. (He got the idea from some of his marijuana-growing friends north of the border.)

In the western world, the Szakys saw no shame in becoming avid garbage pickers.

The company’s first product was a worm-poop fertilizer that it sold as plant food — packaged in used beverage bottles, so it could be stocked on retail shelves of its customers. Walmart and Home Depot were early to buy into the idea. And TerraCycle successfully grew that line to $6 million.

Not bad for someone literally selling shit in garbage containers.

But that’s exactly when Szaky realized his organization needed to reconsider the bigger waste problem with fresh eyes if it truly wanted to become legendary. There comes a time in almost everyone’s life when they realize that their current position is their biggest barrier to growth.

So, the TerraCycle team reimagined the problem again. Today, they talk about eliminating the very idea of "waste," drawing inspiration from the way that natural systems function. They are laser-focused on the much bigger mission of turning hard-to-recycle materials into something useful.

Tom’s unique-and-controversial rationale: He didn’t want TerraCycle to be known as a one-product wonder and it was on its way to becoming just that. Hence the pivot.

He wanted the organization to address a much larger category — no matter how painful that revelation might be in terms of revenue hiccups and employee turnover. It was time to burn the boats.

And it was tough: TerraCycle had to close a factory and lay off workers in order to invest in that change. It takes courage to be legendary.

Tom explained how he thinks about his favorite "problem" during an interview with Heather, who has covered TerraCycle for close to a decade:

"The primary purpose was solving a major issue, and for me garbage was the issue. It’s a fascinating topic. First, and this is a fun thing, it’s the only industry in the world that will one day own all of your possessions without an exception. No other industry can say that. It’s also the only industry that has negative raw-materials costs. In other words, people are willing to pay you to take the material. That’s what defines garbage as garbage. The third, for how big it is, and how everything one day will be in it, it’s one of the most un-innovative industries. Per increment of revenue in the industry, it has one of the lowest levels of innovation. And a big part of that is it’s not sexy; people don’t like dealing with it. We flush it down the toilet, we put it in our trash, we don’t like thinking about it."

The roots of Tom’s fascination with garbage actually stretch back to his early childhood in Budapest.

When his family emigrated to Canada, they were astonished by the sorts of things people would leave in the street as trash — like perfectly good television sets that were considered obsolete, but that were otherwise usable.

Contrast that mindset with communist Hungary, where you actually had to apply to the government to become a TV-set owner. In the western world, the Szakys saw no shame in becoming avid garbage pickers.

Competition validates that the problem you solve is important. And most of all, by copying you, your rivals are telling the category that you are the leader.

Tom’s decision to reconsider the waste problem through a much larger, yet more focused lens catalyzed a huge expansion starting in the 2007 time frame: TerraCycle’s businesses now include a "sponsored waste" service that helps consumer brand giants like Unilever and Procter & Gamble collect hard-to-recycle packaging and an R&D group dedicated to figuring out how to repurpose stuff considered "non-recyclable."

Massive companies like Waste Management are copying its ideas. In fact, category designers always attract competitors. And that’s a great thing. Competition validates that the problem you solve is important. And most of all, by copying you, your rivals are telling the category that you are the leader.