Less can be more, but endless is most

Joel Makower: You mentioned that the history of design relates to sustainability. Can you elaborate?

Bill McDonough: We can look at the history of design to inform us about where we've been and where we want to go.

Over time, master storytellers and documentarians have wanted to tell the Cradle to Cradle story, and have tried, but they often come back to us, saying, "It's really hard to tell a simple story as a documentary filmmaker about Cradle to Cradle because it's hard to find the beginning, the middle and the end."

That makes me laugh. Of course, you're not going to find the beginning, middle and end; that's the point. The irony extends to the issues of design itself because we are designing for endlessness, and that's really interesting. When the language changes, the optics change.

When we design what's next into what's now, our language changes from "end of life," which is a human projection, to, say, "end of use." It changes the nature of the design itself because it becomes design for disassembly. It becomes design for the next new nutrient-management cycle.

Makower: Well, I can see that for a simple thing like a pencil, but with something more complex — a computer or a car or even a multi‑material package — how would the designer and the manufacturer be able to think about what's next? It's not even part of the value proposition of what they sell. They're there to sell cars and not the things after the cars.

McDonough: Michael Braungart and I expanded on this concept in "Cradle to Cradle" and again in "The Upcycle." The car is seen as a service that could come apart and the materials could be continuously engaged by the manufacturer. What if you have a car that was essentially glued together, for example, or adhered in a way that it could be disassembled, and the key to taking it apart was actually owned by the company who made the car?

The idea of having materials that are recoverable is a smart idea, but it also improves the design.

Consider the Tesla. The Tesla Model S is primarily aluminum. They’re using multiple ways to adhere aluminum to itself. You can weld, you can rivet, you can fold, you can do all kinds of things. So the idea of having materials that are recoverable is a smart idea, but it also improves the design because now you don't have issues of multiple dissimilar metal parts. You don't have a million kinds of attachments. You're dealing with less complexity in terms of worrying about galvanic corrosion between different metals and things like that. So it actually gets much simpler.

Makower: Is that what you mean by "designing for what's next"?

McDonough: Yes. You're designing an amount of material so that it can be recovered in bulk easily. A key to recycling is concentration and flow.

Makower: But what if you don't know what "next" is? You only know that there will be one.

McDonough: It’s nice where there's a system waiting to receive it. But if there's not, you can still use that potential system as a way of thinking because it rarefies the design and makes it available in case we have those systems coming, certainly in packaging, as we've discussed before.

If you design it for just for packaging, it's headed to a landfill or incinerator because there's no way to take that paperboard with that clear plastic on the front of it and do anything with it that's coherent. These packages are called "contaminants" within the recycling world. If you design that for what's next, you would be designing it as compostable or as recyclable. We could design biological or technical packaging, for example.

Makower: So, let’s get back to the history of design.

McDonough: Let's take a kind of nutty compression. If you're a hunter-gatherer 10,000 years ago, you are not dealing with concentration or flow. Because you're gathering nuts, berries, bugs, rabbits, whatever, and you're moving around. You're leaving behind your waste as essentially biological nutrients as you move around. So, you're just part of the ecosystem. You come, you do your thing, you move on.

Later, we get modernism, which might be best expressed in terms of Mies van der Rohe's famous aphorism, "Less is more." Is this parsimony and efficiency, or is it elegance?

Now, coming from Japan, "simple" and "less is more" are clearly parts of an ethos of elegance where things are given and they're essential in nature as a sense of how you've rarefied to the core of an object, where its essential nature is being expressed — the chopsticks, the silk‑wrapped present, the rice straw created around the egg to carry it. Less is more. And that gets translated into this industrial aesthetic where you're dealing with efficiency.

I have a new aphorism: "Endless is more."

Joel Makower: Is it a play on the word "endless"?

McDonough: Of course. You can say it as "End 'less is more,'" or you can say "Endless is more." Because that's the design for what's next.

Makower: What does it mean?

McDonough: It means let's not just think of the world as a place we need to minimize. You see, if less is more, then what happens when we have fewer monarch butterflies? Is that more? Is that OK because less is more?

If it has any fundamental affect on your sense of the world, "less is more" might mean not celebrating abundance of, say, biodiversity. If you're a farming chemical company, and you say, "Let's rarefy the agriculture down to just the corn or soybean, then 'less is more' because you’ve figured out how to get rid of all this extraneous stuff like milkweed." It's an ethos of design that says get that thing that you're aiming for. And then everything else is eliminated because less is more.

Let's not just think of the world as a place we need to minimize. You see, if less is more, then what happens when we have fewer monarch butterflies? Is that more?

Makower: How does this change the design process?

McDonough: If I design something to come apart, it is likely to go together more easily. Because if I have to take apart an appliance or something and I design it to come apart, then often I'll have clipped it together and fixed it with a screw where I need it, but the other pieces are just locking into each other, held together by one screw because it's much faster.

Makower: What's do you want a business person to take away from this conversation?

McDonough: Go back to the fundamentals of the design question. Yes, form follows function, but look at where it came from — an architect, Louis Sullivan, who gloried in the beautiful forms of nature. So I would say take that away: It's not just utility; it's beauty. It's not just Aristotle and truth in number; it's also Plato and truth in form and culture and beauty. Let's design things that are both functional and beautiful — that are both useful and give us wonderment. That would be one takeaway.

Second, less is more. The notion that we're efficient and that we can find elegance and simplicity is very true. Don't clutter up your designs with all kinds of florid stuff, but don't forget, this would be like Mies van der Rohe looking at Louis Sullivan, saying, "Get rid of all that filigree. All you need to do is express the vertical, the horizontal and the glass." The Seagram Building versus the Wainwright Building.

Louis Kahn famously said, "I asked a brick what it wanted to be and it said an arch." Kahn’s remark about Mies van der Rohe’s Seagram Building, where my father worked, was very inspirational to me. He called it a beautiful lady with hidden corsets because the whole back of the building is opaque and supports the glass and bronze tower facing on Park Avenue. It is across the street from Lever House, which was by Skidmore, Owings & Merrill. These two early modernist glass landmarks are diagonally across the street from each other. 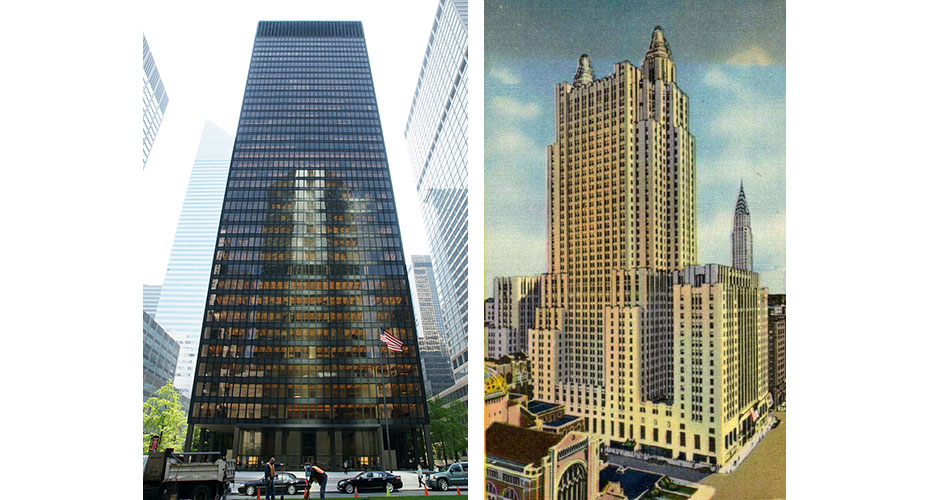 At that time in the Fifties, most of the buildings on that section of Park Avenue looked like the Waldorf Astoria; they were buff limestone. Then all of a sudden, there's Lever House, a green glass building with shiny metal. And then there's the Seagram Building, an elegantly refined brown glass and bronze building.

Oh, my goodness. They must have looked like visitors from outer space. But less is more. All these other buildings were decorated. These things were just what they were and expressed their structure — their bones and skin. Was it parsimony? Were they being cheap? Not in any way; these were expensive new aesthetic experiments. They are now, and will continue to be, highly valued legacy landmarks prized within architectural culture and by the marketplace.

Makower: So, designers need to think about both the short and long term.

McDonough: This is what I'm talking about — endless is more and we get to celebrate it over and over again and we support multi‑generations of both living things and also material things. These endless designs we are speaking of can provide for a rich range of human needs, wants and loves. They can be ephemeral but comprised of safe reusable materials, they can be one-generational-like office furniture or carpets or they can even be legacy landmarks we wish to preserve as cultural anchors with a graceful durability for centuries — even millennia. This is living on an eternal site, the Earth, with materials as nutrients and carbon as an asset.

Design for endlessness is more because we get to bring new lenses to seeing energy that comes from the sun as endless, and see solid carbon in the form of carbohydrates or even polymers that we want to keep earthbound. Because at this point, anthropogenic gaseous carbon in the atmosphere has become a toxin.

So with "endless is more" we don't thoughtlessly throw ridiculous amounts of valuable carbon into the atmosphere. You don't end up with an elegant building that is an energy hog, even if it less than its neighbor. Elegance all of a sudden means endlessness, and endlessness means clean and renewable power and safe materials, just like most of the planet around you used to be — the one from which we evolved.

Makower: The possibilities are indeed — endless.