Lessons in Innovation from Spaghetti and a Marshmallow

What can some of the most highly educated, sustainability-focused business leaders learn from 20 dry spaghetti noodles, a yard of string, a yard of tape and a marshmallow?

Plenty about the process of innovation, as it turns out, as well as insight into how well they collaborate with others.

Tom Wujec, a fellow at Autodesk and a trailblazer in visual innovation, brought his "Marshmallow Challenge" to the GreenBiz Innovation Forum today in San Francisco, where about 25 teams formed by conference attendees tried to build the tallest, free-standing structure from the ingredients listed above.

"It's a wonderful exercise, easy to understand but not so easy to for people to do," said Wujec.

After forming teams, the group spent the next 18 minutes in increasingly intense and at times noisy collaboration. About a third of the teams were on their feet with Wujec's signal to begin. 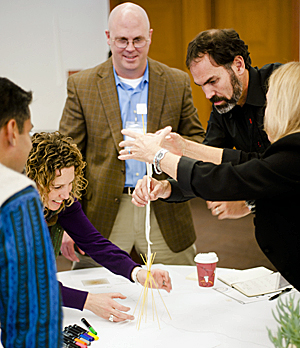 For many -- relative strangers to their teammates -- this was the getting-to-know-you period in overdrive. There were swift introductions and a getting down to business.

Some went around their table in an orderly fashion to gather ideas, others offered team members sketches of plans, one team looked like it was drawing a flow chart and still others divided their team up into smaller groups to fasten the spaghetti into triangles for a base or a tripod to serve as a framework.

At the halfway point, the decibel level in the room was rising and frowns of concentration creased several faces. With six minutes left to go, the work proceeded apace but the volume edged off a bit as teams tried to top off their structures -- and make quick repairs or course changes when the marshmallows added unexpected weight to the designs.

With two minutes left to go, most teams had reached their moment of truth: Their design was either working and needed only a few more adjustments -- or was flawed beyond repair. Regardless, the mood in the room had lightened. Teams were beginning to make assessments of their own work and that of competitors, and what had been stolen glances at other tables during the earlier part of the exercise became earnest, searching examinations -- which often ended with looks of relief.

In the end there were two strong contenders for the tallest, surviving free-standing structure. (A few made it to the end of the 18-minute period only to topple before they could be measured.) A two-man team made a 24-inch-high structure and a five-person team, whose members included people with backgrounds in engineering, chemical engineering, architecture and marketing, built the winning entry, which stood about 27 inches tall.

When Wujec asked the roomful of participants what happened and what they learned, several came forward. Their comments included:

"Yes," Wujec said in commiseration, "thinking can paralyze you."

Other barriers include the jostling for power that often occurs at the onset of the exercise, he said.

Interestingly, recent business school graduates consistently perform more poorly than other groups and recent kindergarten grads tend to do the best, said Wujec, who has conducted the Marshmallow Challenge about 140 times in a variety of venues and business gatherings, including the Ted Conference.

"if you look at their (kindergartners' structures) they look more organic, they do twice as well as MBAs," Wujec said. "Kids don't spend time seeking power. They play, they build prototypes ... they have a conversation with the structure."

By prototyping and refining, children capture "the essence of the iterative process," he said. They play, they collaborate, they experiment and they have fun -- another essential element of innovation as Tim O'Reilly noted in his presentation at the forum.

Innovation enables people to connect with concepts and each other in five different ways, Wujec said:

The success of the connection and collaboration depends on the people involved and the right mix of diversity and experience in the fields that inform the project at hand, Wujec said. Incentives also can play an important role.

To illustrate the point, Wujec told of an exercise he conducted with a group to whom he promised a prize of $10,000 in Autodesk software to the winner of the Marshmallow Challenge. The teams were so caught up in the allure of the prize and the idea of defeating the competition with a structure of stunning height that none won.

Wujec conducted the exercise again later with the same group. This time success didn't elude them and the winning design was completed in just six minutes. 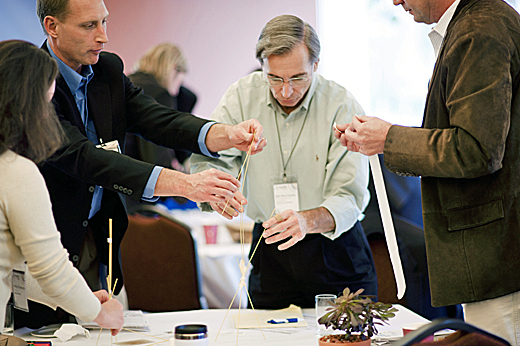