Excerpt from "Accelerate This!: A Super Not Boring Guide to Startup Accelerators and Clean Energy Entrepreneurship," by Ryan Kushner (2018).

As we roll through 2018, a complete disruption of energy is happening globally. China is adding a London-sized electric bus fleet every five weeks. A solar plant was recently built at the site of the Chernobyl nuclear disaster. An Achuar community on the Amazon is using a solar-powered river bus to get their kids to school. California is having days with 75 percent of its power coming from renewable sources… and less than 1 gigawatt of capacity from fossil fuels. Germany has had 100 percent renewably powered days. India added more energy capacity from renewables than coal last year. Saudi Arabia just announced a $200B solar project. 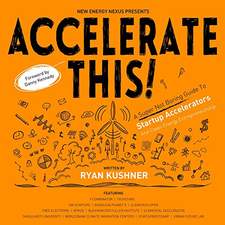 The world is rapidly moving beyond 20th-century energy systems for the provision of electricity and mobility services. The pace of change is greater than any experienced in over a century by the incumbents of the utility and automobile industries in the so-called "developed world." And for the very first time, over a billion people in the global South have the prospect of benefiting from electric power and modern transport.

By the numbers, the wheel of creative destruction that is turning through the "commanding heights of the economy" is staggering.

Yet, all this is not enough. According to a study from the United Nations, renewable energy and energy efficiency can provide over 90 percent of the energy-related CO2 emission reductions required to keep global temperatures from rising by 2 degrees Celsius, but we need to increase the rate of adoption of these technologies sixfold.

The rate of change in end-use energy systems is the issue of our times. And a key determinant of that rate of innovation and adoption of these solutions on the ground is the entrepreneur: how many we have, and how successful they are in their work.

A key determinant of that rate of innovation and adoption of these solutions on the ground is the entrepreneur: how many we have, and how successful they are in their work.

Entrepreneurs and the businesses they build come in a variety of shapes and sizes. Some big factories in China are making batteries for those buses. A developer from Germany is remotely monitoring the solar plant at Chernobyl. An ingenious indigenous leader took the effort to secure 30 solar panels and an electric outboard motor for a canoe to show the Achuar that they don’t need to depend on oil. A financier from Japan needed to partner with the Saudis to get them to realize their solar potential, etc.

Around the world there are thousands of stories playing out in the energy transition with startup companies and social enterprises creating new electricity and mobility solutions.

Some of this requires novel invention, while much of it is the adaption of an existing business — a PV plus battery installation, for example — in a locally appropriate way.

Again, the dollar values are staggering. Hundreds of billions in wind and solar projects last year made for a lot of companies being busy for a lot of months in a lot of markets. And they created a lot of jobs. But for that to continue to grow at the scale required, many more startups are required. And all these startups need support and capital to succeed.

We soon will have to be creating over $1 trillion of value annually in the energy transition. That’s 1,000 times $1 billion. Enter the entrepreneurs.

Since the rate has to increase sixfold, we soon will have to be creating over $1 trillion of value annually in the energy transition. That’s 1,000 times $1 billion. Enter the entrepreneurs.

We need tens of thousands to try, because to grow 1,000 successful (aka $1 billion) businesses in these industries, delivering new goods and services, many more will try and fail. Napster wasn’t the first or last company needed to disrupt the music industry, nor Nokia the phone business. How many more were needed to innovate, find customers, sell, finance, and scale the business of streaming music or mobile communication that we take for granted today?

Energy is a much bigger game. In order for the energy entrepreneurs of the world to "try" — to innovate, identify their customers, find their product market fit, build prototypes, break and build them better, make their first sale, get their first finance, and hire the right people — they need help. This is why we have produced this guide.

So, what is an accelerator?! What's unique about energy acceleration/cleantech?

Energy acceleration (and cleantech in general) presents a very specific set of challenges, and potential rewards. If done well, the rewards are a direct impact on climate change by reducing or eliminating the use of fossil fuels, and the opportunity to participate in one of the largest and fastest-changing industries in the world: power production and delivery, mobility and electric cars, water, food and agriculture.

However, there are unique challenges that need to be considered by anyone in the cleantech startup or accelerator space. Some of the challenges include:

Most of the tech world thinks in terms of software, which shoots for three to five years for exits and relatively low costs for things like equipment. Cleantech investments generally run more in the five to 10 years range for a financial event (aka investors get their money back), and many products require expensive physical goods, certifications, pilot projects, etc. — things that make companies have higher burn rates and thus require more funding to keep afloat.

Cleantech investments run five to 10 years for a financial event (aka investors get their money back), and many products require expensive physical goods, certifications, pilot projects, etc.

This scares away many investors and, from an accelerator point of view, creates the need to curate a set of longer-term thinking funders with the stomach to stay invested for the long haul and budget appropriately for the program. This is changing as energy gets more digital and mergers and acquisitions heat up in the cleantech sector (especially with the oil majors getting into the space again), but much of this unique cost structure is likely to remain.

While this also is changing as more of the energy and transportation worlds become digitized and regulations loosen, startups and accelerators are operating in a world with established gatekeepers like power utilities, transportation, construction, or heavy industry behemoths. These can be 100-plus-year-old companies that are embedded and protected in the legal system. This makes sense, since they handle the transportation and associated risks of real electrons, cars and trucks, and food. Larger, older companies tend to be slow to innovate, cautious to experiment, and often create barriers for new entrants.

The opportunities here tend to be forced by law or glaring breakdowns in the existing system. For example, TEPCO joined the Free Electrons accelerator program after the Fukushima nuclear disaster led to the government stripping their monopoly status for residential customers. Suddenly, they were forced to compete and fight for customers, spurring them to innovate and work with startups.

Competing with an existing product

You flip the switch, the lights turn on. Unless you are in a developing market, you likely have an existing energy provider… but do you have a home device like Alexa? This is the difference between incumbency and not; competing with an established service required more activation energy for customers to adopt it.

Cleantech has a special challenge, in the form of regulatory capture, aka being locked out of an industry by a wall of policy. Want to sell a new electric car like Tesla? Want to install a meter on your customer’s electric box? Imagine the local, state, and federal safety and regulations you have to deal with versus, say, a new dating app. Yeah, you can’t just swipe right on this one. I tried to create a community solar company in California, where it is 100 percent legal, with some of the smartest and most experienced solar energy folks I could find. We pounded the pavement for months — and eventually gave up. We aren’t the only ones who have tried: as of this writing, there are exactly zero community solar commercial projects in California because the fees you are mandated to pay the utility to use their power lines make it a losing economic proposition. That’s capture.

Why 'climate tech' is the new cleantech