A Look Inside Facebook's Green Announcements

Facebook, as you may have heard, is going green. Or, more accurately, they're starting to communicate their green initiatives.

But it's also fair to say that they're still getting a grasp on exactly what it means to undertake a green program, and how exactly they do it.

After last week's short item about Facebook.com/green, the home for all things environmental at the social network, I spoke with Kathleen Loughlin, a member of the company's communications team, about the kickoff.

"We've been thinking about it a lot -- asking, how do you tell the green story?" she explained. Now, they're in the midst of gathering details about all of their disparate green efforts. "There are some that we didn't even know about -- employees would email and say 'we are doing this on our team, you should list this'" on the "green programs" page of Facebook's green site.

As with many companies that don't yet have a dedicated green executive or a green team, there are siloed teams at Facebook that are all working in their respective departments -- Facilities, Infrastructure, etc. -- on green efforts. So the first step in Facebook's green program was making a list of the green programs already in place.

To date, there are four different programs the company is publicly announcing. They include water conservation efforts that have cut water used by the 1,700 Facebook employees by 60 percent, a Google-esque employee shuttle program that 40 percent of employees use instead of driving to work, and recycling and composting efforts in-house.

Just as Facebook's in-house green projects had been un- or understated before last week, we're also getting a first look at some of its IT innovations -- even though they were quietly unveiled months or even years ago.

HipHop for PHP, for example, was introduced in February 2010, and one of the company's engineers gave the program a six-month review in August, but last week was the first time it had appeared on my radar.

Loughlin explained that HipHop for PHP was developed by Haiping Zhao, one of the engineers on the engineering infrastructure team. "They had an initiative to reduce the CPU of their servers during a rapid phase of growth, so Haiping came up with it, a team of three tested it, and then they put it into work."

The program converts PHP to C++, shifting Facebook's code from one that is easier for developers to write to one that runs more energy efficiently, and it cuts the energy used by its servers by 50 percent. Facebook made HipHop for PHP open-source, and a number of companies are putting it to work and seeing similar savings.

According to the note posted in August by Scott MacVicar:

Since February, the team has made HipHop another 1.8 times faster and all of that code is open source. We've also seen improvements to PHP itself with the additions to PHP's trunk in April being about 10% faster than 5.3.

Over the past few months we've worked with the >Drupal, MediaWiki, phpBB and WordPress teams to get their software running under HipHop. This really means helping them remove some dynamic code and fixing bugs found by the compiler. Today Drupal.org and WikiPedia are all testing versions of their sites under HipHop, with others having plans to do so soon. While this statistic isn't final, we found WordPress has become 2.7x faster when running under HipHop.

Facebook went through much the same process with Haystack, its photo management system. Haystack was first described in April 2009, when the website was hosting about 60 billion images. At its projected growth rate 18 months ago, that means it is now hosting about 75 billion images. Loughlin said that a team of engineers worked on a more efficient way of storing and serving all those billions of photos, and Haystack was the result.

Last but certainly not least, Facebook has lately been sharing some details of how it is focused on data center energy efficiency. In the last couple weeks, Facebook engineers have laid out how they're using green IT practices to save $230,000 and $273,000 a year in two leased data centers.

The strategies are pretty well established -- hot-aisle/cold-aisle containment, higher data center temperatures, etc. -- but it's important to note that Facebook has begun sharing some of these details with the public and with other IT companies. And of course, Facebook will likely be putting these strategies and many more to work in its first company-owned data center, the Prineville facility that so much has been written about.

Much of my discussion with Loughlin was off the record -- the company is, as has been noted above, still working on communicating its green efforts -- including almost all of our data center discussion. But the company is planning to continue its relative openness about its data center practices once the Prineville data center opens up (the photo below is of the "topping out" ceremony in Prineville). And Loughlin used one word to describe the facility: "Awesome." 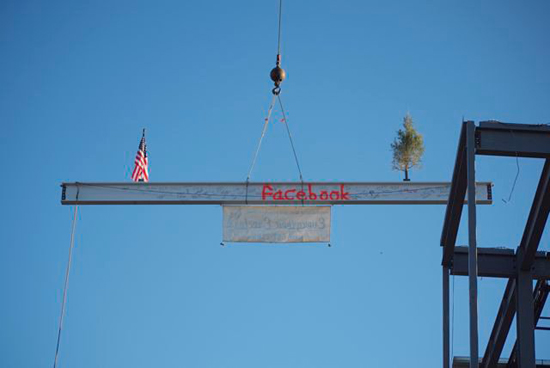