Juice boxes and milk cartons, the bane of some recycling programs, can be chucked straight into household recycling bins in Los Angeles under an expanded program the city created with help from the Carton Council industry group.

The group of carton manufacturers works with recycling companies, cities and paper mills to promote recycling programs for liquid food and beverage containers, the technology that makes it possible, and end markets for the material. In Los Angeles, the group worked with the city and the companies that provide curbside residential recycling services so that cartons for refrigerated and shelf-stable products like soup, broth, wine, soy milk, milk and juice can go into the blue collection bins instead of the trash.

Recycling the containers for liquids that are in boxes with a waxy feel or lined with a thin layer of aluminum has long been problematic for some curbside programs. Some waste management firms will accept the cartons for cold milk or juice only for composting; other companies won't accept food and beverage cartons at all.

For the recycler, which determines what materials it will accept and where they ultimately will go, the key is finding a viable end market for the materials, according to Fielkow, who was in Los Angeles last week for the launch of the city's carton recycling initiative.

"For (recycled) cartons, there is a strong North American and global demand," said Fielkow. "We're seeing that there are good trading end markets."

The market is largely driven by tissue mills with filters that can separate the fiber and non-fiber content of a recycled carton and use the fiber that is recovered to make facial and toilet tissue and other paper products, as the chart below shows. 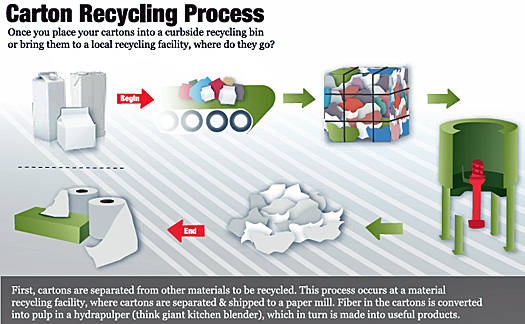 "In many cases, the material goes right from recycling plant or sorting plant to a tissue mill," said Fielkow, who added that the market for recycled cartons from the U.S. includes paper mills in this country, Canada and Mexico.

Recycling food and drink cartons will bring Los Angeles closer to its goal of divertlng 70 percent of its solid waste from landfill by 2013, according to the city. LA currently diverts and recycles 65 percent of the 10.1 million tons of solid waste it generates annually. In its first year, the city's carton recycling initiative is expected to divert 430 tons of material from landfill.

"The city of Los Angeles has partnered with the Carton Council to make sure that liquid food and beverage cartons are not left to the landfills but are recycled in the most responsible and efficient way possible," Mayor Antonio R. Villaraigosa said in a statement announcing the program.