Baltimore, like many post-industrial cities, confronts novel challenges. Once the sixth largest city in the United States, Baltimore’s population has contracted by more than a third, resulting from a complex suite of factors including job loss, economic decline and discriminatory policies or housing and lending practices. It's estimated that at least 16,000 buildings in Baltimore are boarded up; most are slated for demolition. But where others see blight, the Baltimore Wood Project sees opportunity.

The Baltimore Office of Sustainability’s Waste to Wealth Initiative worked with partners, including the U.S. Forest Service, to pilot a project designed to salvage wood from both buildings and urban trees. The Baltimore Wood Project aimed to reduce landfill waste, create jobs, refill municipal coffers and engage the local community while encouraging environmental sustainability, and to demonstrate the concept’s viability to other cities. 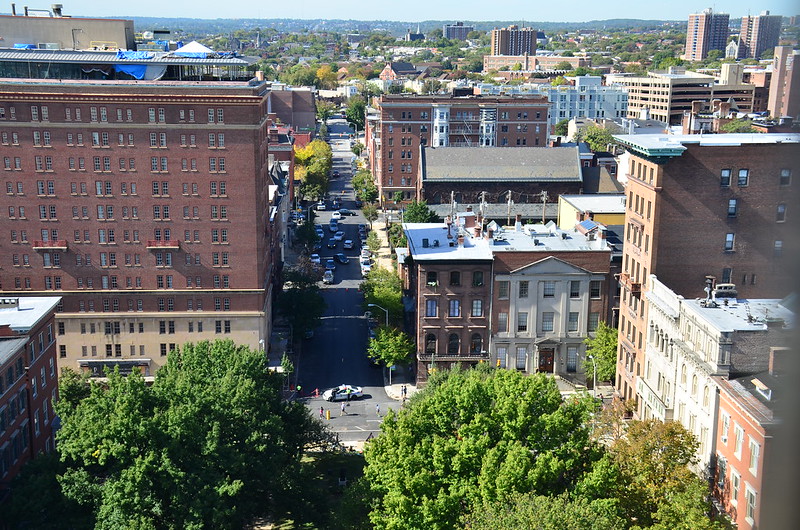 Buildings such as the vacant row houses in Baltimore can be demolished, but they also can be deconstructed to salvage the materials. The salvaging process requires much more time and labor than demolition. For Baltimore — a city with an unemployment rate of nearly 5 percent (PDF), climbing up to 15 percent or more in some neighborhoods and a poverty rate nearly double the national average — this presents an opportunity. The project partnered with Humanim, a non-profit organization that helps find jobs for residents with barriers to employment, such as former prison inmates. Since 2012, Humanim has employed more than 150 low-income residents and generated more than $4 million in sales from recovered wood. In Baltimore, Humanim demonstrated that this model could work (PDF), in a way that includes underrepresented groups and creates opportunities for workforce development and leadership.

After reclamation, members of the project process and repurpose the wood for sale in a closed loop system that contributes to a sustainable, networked regional economy. As many row houses were built more than 100 years ago, much of the reclaimed wood is valuable, old-growth lumber (PDF). Much of the wood is stronger and more resistant to rot, as builders of this era used wood harvested from virgin forests, a rare practice today. Sustainable furniture-makers use this wood in high-end furniture. Rural communities in the northeastern United States also purchase the wood.

Following demolition, the Baltimore Wood Project partnered with another non-profit, the Parks and People Foundation, to create green spaces where some blighted buildings once stood. Shared stewardship of community gardens and green spaces may increase social cohesion and promote community development.

But the project’s scope expands beyond reclamation: Baltimore, like scores of cities, also wrestles with effective ways to manage its urban wood waste. This includes damaged or dead street trees and yard trimmings, in addition to lumber from construction and demolition. Wood waste contributes substantially to the 720 billion tons (PDF) the world’s cities generate every year. In 2015, U.S. landfills took in more than 22 million tons of wood waste and yard trimmings, plus nearly 40 million tons more from construction and demolition. The USDA Forest Service estimated that in 2000, the volume of urban wood waste even exceeded the volume of timber harvested from national forests. A 2019 study suggests that the potential value of this woody biomass ranges from $79 million to $786 million annually in the United States, depending on reuse strategy.

The city previously dumped wood waste at Camp Small, a collection yard. Every year, the city paid around $60,000 to remove some debris and left the rest to decompose. But brush cut from dead or damaged trees within the city holds potential: It can be transformed into wood chips for mulch. With an Innovation Fund loan from the city, the Department of Parks and Recreation’s Division of Forestry began the Camp Small Zero Waste Initiative, which sorts the waste more effectively and diverts it from landfills. Now, the city offers the mulch for public purchase and provides it to city agencies and community non-profits at no cost. In a partnership with a local sawmill and American Forests, Camp Small also processes suitable trees into lumber, slabs and firewood for local and national retail. Baltimore eliminated the $60,000 annual expense and instead generates revenue through sales and savings. 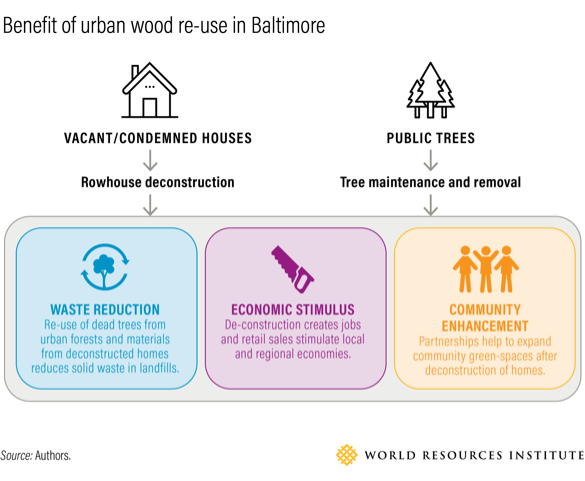 Although this project’s inclusivity and emphasis on job creation set it apart, Baltimore isn’t alone in re-using urban wood. In Lagos, Nigeria, nearly 300,000 tons of wood waste are generated each year — and to deal with the volume, open burning of waste is common. But more and more, Lagos is using the wood in creative ways: turning it into sawdust as bedding for chickens or using it as fuel for cooking, which can relieve pressure on surrounding forests.

Washington, D.C., is piloting another innovative wood reuse initiative: Public schools can request wood products such as benches and wood chips made from the city’s recycled trees. In California, Sacramento’s Urban Wood Rescue Program offers private landowners the opportunity to donate salvaged logs from yard trees, offering a tax deduction equivalent to the estimated value of the log. Finally, Baltimore is working with other communities across the nation to exchange knowledge and best practices through the annual Urban Wood Academy.

Finding funding for urban forest programs in shrinking city budgets can be tricky, and the management and removal of aging and diseased trees can pose a burden to residents and local governments alike. Mounting evidence suggests that urban forests and wood reuse initiatives are solid economic investments, with long-term environmental and social returns. Revenue and public support from urban wood reuse programs might offer a creative way to help fund urban forests and reduce the ever-expanding burden of waste production — and they just might create a more resilient community in the process. 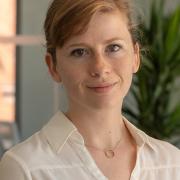 See all by Edie Juno