Mahindra is launching a $3,000 electric scooter in a city that wants credit for the cutting edge of sustainability.

The chairman of one of India’s largest companies, Mahindra Group, known worldwide for manufacturing tractors, utility vehicles and electric cars, came to Oakland, California, this week.

Mahindra launched an electric powered scooter, the GenZe 2.0, and joined the city of Oakland in starting a solar powered electric bike share program in which a solar charging station houses bikes and scooters for public use.

Oakland happens to be the hometown of GreenBiz, so we witnessed the excitement.

On a sunny, blustery day, the plaza around City Hall was abuzz with the launch. Oakland mayor Libby Schaaf cut the ribbon for the charging station and called it "the first in the world." Passersby were offered a chance to test drive the scooter.

Mahindra’s chairman, Anand Mahindra, traveled around the world to be there.

Both Mahindra and Vish Palekar, CEO of Mahindra GenZe, spoke to assembled dignataries in City Hall chambers. Danny Kennedy, co-founder of Oakland’s first solar company, Sungevity, and managing director of the California Clean Energy Fund, was on hand as were mayors of nearby cities.

It was a big deal, apparently, for both Oakland and for Mahindra.

"What?" you might ask, "A scooter?" Others are on the market. Just because it’s electric and can use a solar-powered charging station in Oakland?

While Oakland isn’t Los Angeles or even San Francisco, it’s not small. It’s the headquarters of Pandora, Kaiser, Clorox, the Raiders pro football team and home to about 400,000 residents.

Even more noteworthy is that Mahindra, chairman of a diversified conglomerate with $17 billion in revenues and operations in 100 countries spanning automobiles, tractors, aerospace, real estate and technology, came to Oakland for the launch — the launch of one product in what may be its smallest division.

"The GenZe," Mahindra said, "is what we at Mahindra call a rise project." Rise is "the core philosophy" of the conglomerate, he said.

"Rise is a philosophy about accepting no limits, about thinking differently and about driving positive change even as we pursue business success. We believe we can do it,” Mahindra expounded in Oakland’s City Hall chambers.

"I personally believe the GenZe is an assault on one of the biggest, most virulent social problems we have today and that is the tendency of us, as individuals, whenever we are confronted by challenge to the community, to the commons, like the climate change problem, our reaction is it is somebody else’s problem to solve, that is not my problem to solve, and we look at government, we look at neighboring countries, we rarely think of it as our problem."

He called the electric scooter that can be charged with solar power a tool that lets individuals solve the problem of climate change.

Schaaf — a mayor who has been advocating sustainability and luring clean tech and low carbon businesses to Oakland — called the GenZe transformational.

"Oakland could not be more proud than to host this launch," she said. "We are transforming transportation."

But it also is no coincidence that India’s major electric vehicle maker is introducing an electric scooter in the American market just at the time that Ford, General Motors and other big car makers are rethinking their strategies for transportation in the near future and investing heavily in electric cars, shared vehicles and the like.

Ford a couple of months ago announced a $4.5 billion investment in electric vehicles and a plan that 40 percent of its new models or nameplates will be electric by decades end.

This is all while Tesla Motors is making the electric vehicle the most lusted-after car of the decade and even Apple is rumored to be designing something to enter the market.

It may be that transportation has become a Wild West market and it’s anybody’s guess what will dominate transportation in a decade or so, which means everybody is angling to get in the fray.

Automakers are all scrambling to position themselves, especially as it regards urban mobility.

It may be that Mahindra, in leaving his oversight of other operations to travel around the world to launch an electric scooter in Oakland, is putting a clear stake in the ground here with what he called "the most relevant technology" in urban mobility.

In an interview with GreenBiz, Mahindra said that America is behind the rest of the world in two-wheeled transportation. Nowhere else do people think it is normal for one person to drive 3 tons of metal taking up a 10-foot-by-6-foot space with no passengers in the backseat. 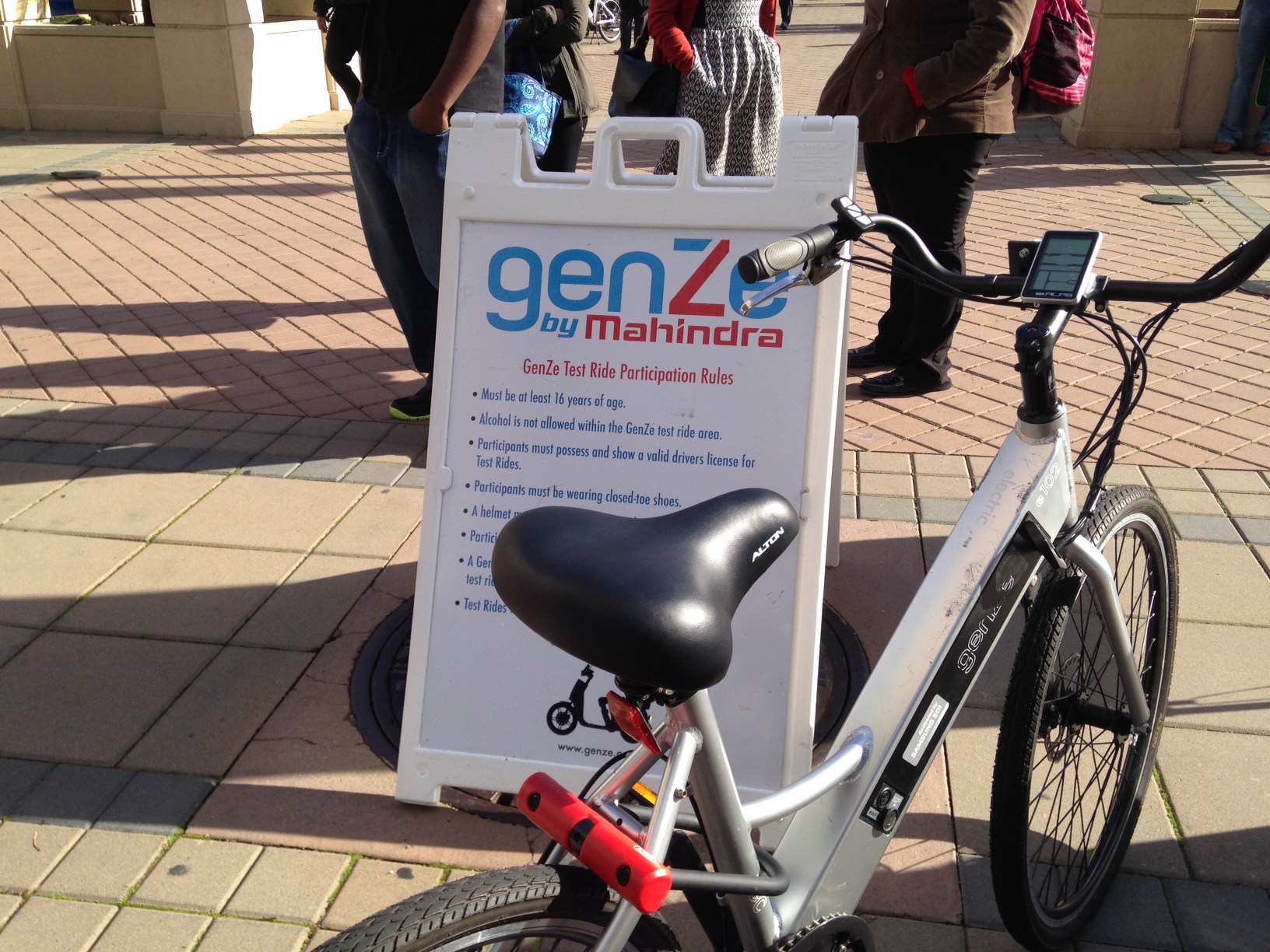 Ah, what an interesting ride this changing landscape in urban mobility is going to be. Hold on.

Meanwhile, Oaklanders will enjoy the Bike Solar Oakland program, thanks to Mahindra, the city, DC Solar (which provides the charging station) and the California Clean Energy Fund.