Setting corporate carbon reduction targets is commonplace nowadays. Many targets are grounded in "guestimates" of what seems reasonably achievable, and are often short-term in nature. Some mask an actual increase of absolute emissions as a result of growth.

They also can be set as intensity targets linked to sales, revenue, production or number of employees, but bearing no direct relation to the actual reductions that would be required according to scientific bodies such as the IPCC. In addition, carbon-neutral or zero-carbon goals often still rely heavily on off-setting, a valuable albeit last-resort measure in reducing corporate carbon (equivalent) emissions.

One may wonder why explicitly building carbon emission thresholds into a company’s performance metrics has been taking so long. A key reason may be the need to allocate such thresholds proportionally to individual emitters. This does not only pose challenges as to how to approach it, but also raises a suite of questions around fairness and equity as well as who’s holding the moral high ground.

The C-Fact model argues that corporate commitments should be proportional to their contribution to GDP and not the corporation’s existing size and footprint. By calculating the company’s contribution to annual GDP and its carbon intensity ratio in CO2-e per dollar of GDP contribution, then linking this to the IPCC’s recommended reduction target for climate stabilization by 2050, an annual carbon intensity reduction target can be derived to guide the required level of absolute emission reductions.

The free C-Fact tool recently has been expanded to make it suitable for use by cities, acknowledging the role of cities as the world’s engines of economic growth. In fact, an upcoming conversion to a web-based tool will make the use of C-Fact Cities as easy as anything. 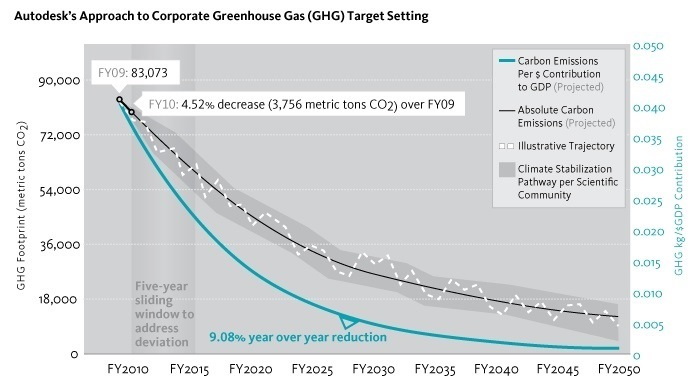 Where C-FACT calls for a fixed percentage reduction of GHG emission intensity year over year, EMC, a key provider of IT storage hardware solutions, reckons that we’re still in the midst of a learning curve for distributed energy-generation technologies in particular, leading to shorter paybacks and higher efficiency as technologies mature over time. Instead of a fixed reduction percentage, EMC has decided to accelerate carbon reductions year over year, anticipating to achieve greater "value for money" for its future carbon reduction efforts compared to now.

Nonetheless, precious few corporates apply such goal-setting against real-world, science-based thresholds — whether relating to carbon or other environmental and social "planetary boundaries." Several organizations such as CDP , WRI and WWF are therefore starting to make the case for increased ambition on corporate target setting through the recently launched "Mind the Science, Mind the Gap" initiative, which is running a public consultation process for its proposed methodology and tool.

Putting an internal price on carbon

A complementary approach to carbon targets based on economic value-added (but not necessarily carbon thresholds) is the emerging practice of putting an internal price on carbon. This usually means either allocating a fee across divisions or business units pending their impact, or using a price on carbon for the planning of new projects. Corporate resource extraction giants such as Shell and Exxon use so-called shadow carbon prices as a regulatory impact tool to help ensure that multi-billion dollar investments remain profitable for decades under stricter environmental rules. An increasing number of companies, though, perhaps most notably Microsoft and Walt Disney, charge internal business sections for the carbon directly or indirectly emitted as a result of their activities.

By assigning financial accountability for corporate carbon emissions, the argument goes, a rapid increase in internal awareness can be realized, driving culture change towards leaner and cleaner operation as well as capital expenditures. In reality, quite a few companies currently set the boundaries at scope 1 and 2 carbon emissions, leaving scope 3 activities such as air travel financially unaccounted for. Furthermore, it’s important to note that the vast majority of internal carbon fees are currently not grounded in scientific consensus on the level of carbon reductions required to stabilize our global climate.

A study by CDP (PDF) found that the range of disclosed internal carbon fees for 2013 among corporates ranged from $6 to $60 for 1 unit of tCO2-e, and from $2 to $161 in the various markets created through governmental carbon pricing initiatives. The lower end of the corporate carbon fee range is mainly dominated by those who use it for chargeback purposes, while the higher end represents the shadow prices adopted for future planning purposes, such as the $60 per ton adopted by Exxon.

When we compare this to the analysis by Michael Molitor into the level of decarbonizing of the global economy needed up to 2050 — while scaling it up to meet the demands of a rapidly increased world population — a minimum price of $40 per ton of CO2-e emitted is suggested slowly rising to $100 per ton in order to generate significant long-term reductions in carbon emissions.

Although few firms will provide detailed insight into their internal carbon pricing mechanisms, Microsoft intentionally has published its current practices to encourage broader uptake in the market. Its internal carbon fee is determined on the basis of current market pricing for renewable energy credits, carbon offsets and an additional amount to provide funding to support other investments including internal efficiency. 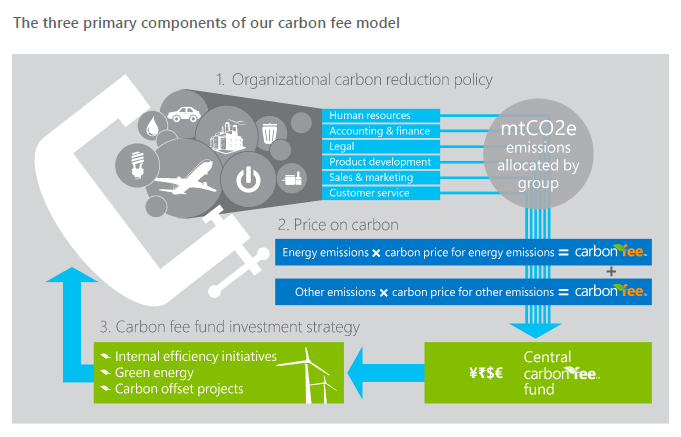 Developing a set of two or more internal prices on carbon is an approach taken by many organizations. First, to reflect the price of generating or purchasing green power to avoid emissions associated with electricity usage; second, to reflect the cost of investing in carbon offset projects to offset remaining emissions. The total cost on carbon also may include investments in internal efficiency initiatives and other elements which make up a company’s investment strategy.

The price to set on carbon often will need to be balanced by a need to initially focus on internal education and building awareness, as well as to avoid abruptly shocking the system. A company therefore may choose to start low while increasing the internal carbon fee and subsequent investments over time, as the benefits become better understood within the organization.