Making a persuasive case for clean energy in 2017

Making a persuasive case for clean energy in 2017

The new year is nearly a month old, but 2016 remains in my head; what a year it was. The Chicago Cubs won the World Series, giant pandas were taken off the endangered species list for the first time in 26 years, relations with Cuba improved drastically and Nintendo, seemingly out of nowhere, introduced to the world Pokémon Go.

With the U.K. exiting the European Union; the loss of pop, movie and cultural idols across the board; and intensifying conflict in the Middle East, 2016 was a rollercoaster of emotions, culminating in a jolting election that many of us will be processing for a long time to come.

Amid all this, there were some surprising winners in 2016, and sustainability and cleantech were among them. It seems that the result of America’s exceptionally turbulent election may have galvanized sustainability leaders, researchers, green business leaders, cleantech entrepreneurs and government officials into action, producing persuasive and uplifting material deriving from all sectors in rapid succession.

At least, that’s what I keep reminding my family and friends. But some still seem more inclined to believe that the success of clean energy and cleantech are more or less fake news — that is, hyperbole or propaganda designed to divert us from reality.

To counter that mindset, I thought it would be useful to consolidate some of the most powerful arguments, ideas, facts and figures supporting clean energy’s significant and measurable rise.

As my college finance professor consistently reminded us, money talks. And in the cleantech space, the money is talking loudly, prompting industry conglomerates to give an ear to the argument that sustainability inevitably is about efficiency, innovation and reputation, three qualities of profitable, leadership companies.

From 2004 to 2015, global investments in clean energy grew from $62 billion to $329 billion, according to Bloomberg New Energy Finance. That amount excludes energy-related investments in advanced transportation, buildings and other technologies. In the U.S. specifically, there was a 17 percent increase in clean-energy investment, totaling $44 billion in 2015, according to this United Nations Bloomberg New Energy Finance (PDF) report.

The 2016 U.S. election focused in large part on the need for American jobs, and for good reasons. Quality jobs fuel strong economies, but how many jobs does the cleantech industry create? And how do clean-energy jobs compare to traditional energy jobs?

In March, a study based on U.S. Bureau of Labor Statistics data found that more than 2.5 million Americans (PDF) work in in the cleantech space, including clean energy, advanced vehicles and energy efficiency-related occupations. The study also highlighted solar as one of the fastest-growing sectors and job creators in the U.S., for the first time last year employing more people than oil and gas extraction. 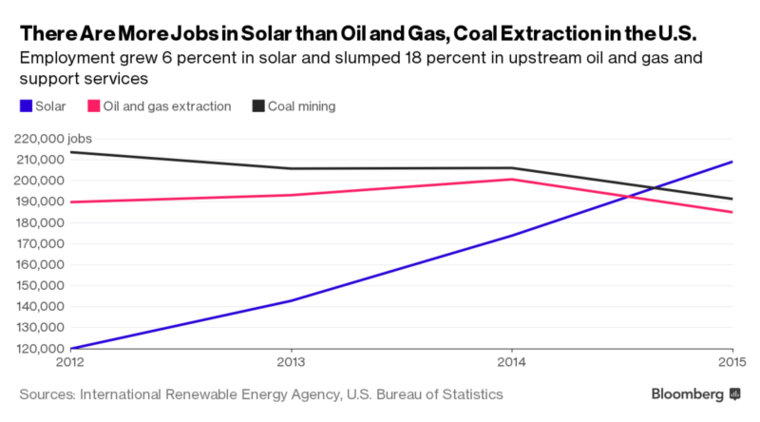 Additionally, the growing clean-energy job sector often offers higher quality and higher compensation opportunities in comparison to fossil fuel employment, according to a comprehensive job analysis conducted by AltEnergyStocks. This is important as we address the livelihoods of traditional energy workers — individuals who often have valuable and transferrable skills — who are caught in the middle of the declining production of coal, low oil prices and the transition to a clean energy economy.

Hard as it is for some environmentalists to admit, over the past decade America’s increased shale oil and gas extraction has reduced reliance on foreign energy. Net imports of energy have declined largely due to fracking and the increased production of these "homegrown" fossil fuels. However, the U.S. still needs to import 20 percent of its energy from other countries.

Looking forward, the continued deployment of renewable energy sources can further close the gap between U.S. energy production and consumption, and simultaneously achieve true energy independence, one where energy supply and price enjoy sustained stability free from the geopolitical manipulations and complexities that often plague the oil and gas sector. The U.S. has an immense renewable energy potential, one that could potentially set up the U.S to become a net energy exporter.

The pathway to true energy independence, one without compromise to air quality and environmental health, is beginning to reveal itself.

According to the 2016 U.S. Energy Information Administration’s Annual Energy Outlook, the largest new additions to electricity capacity came from solar and wind. Add geothermal and the three represent 63 percent of all new U.S. electricity capacity.

For a global perspective, the British oil giant BP stated in its Statistical Review of World Energy (PDF) that in 2015, "Renewable energy used in power generation grew by 15.2 percent, slightly below the 10-year average growth of 15.9 percent but a record increment (+213 terawatt-hours), which was roughly equal to all of the increase in global power generation."

The pathway to true energy independence, one without compromise to air quality and environmental health, is beginning to reveal itself. Not only can renewable power mitigate reliance on foreign energy, it can help ensure supply, price stability and predictability.

4. Clean energy is in demand

Renewables, energy efficiency and the integration of sustainability principles are things that both on the commercial and residential energy customers want.

For example, as of the end of last year, 71 Fortune 100 companies and 215 Fortune 500 companies had sustainability goals, a renewable energy target or both, according to the research and advocacy group Advanced Energy Economy. These influential companies live and operate across industries and sectors, suggesting that sustainability and clean energy target-setting is seen not only as good business practice, but a means to bolster the bottom line.

In the past two years, the demand for solar solutions within the residential space has seen a steep increase, with national installation doubling in megawatt production from 2014 to 2016. Utility-scale solar continues to dominate demand, growing from 4,000 megawatts to more than 10,000 megawatts at the end of 2016 according to this SEIA and GTM Research report. 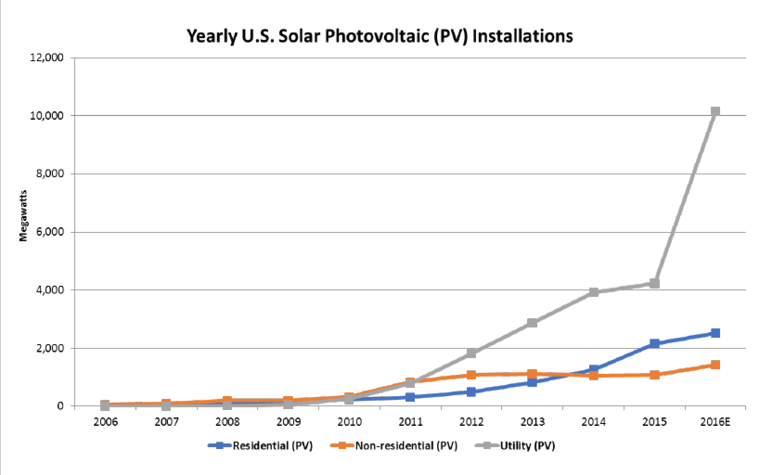 There’s more, but your eyes are probably glazing over from all these graphs and stats.

The point is this: 2017 may feel unpredictable at times, but we can all rest assured that sustainability in general, and clean energy in particular, is alive and well in the United States, and that there are sound business, social and economic reasons (not to mention environmental ones) for staying the course.

Amid the news of the day, facts and figures like these give me confidence and hope for the year ahead.

Cleantech Survives a Crisis of Confidence

The Sunny Side of the Street: Investing in Solar

US corporations heat up solar market