For as much as outdoors equipment connects people to nature, it also carries an environmental toll: synthetic material upon synthetic material, plastic clips galore, protective boots, not to mention all the shipping and manufacturing that goes into them.

But greener options and methods exist and continue to be discovered, spurred on by concerned companies and challenges put forth by members of the backpacking community.

Starting this month, five pairs of boots that are hoping to have the lowest carbon dioxide footprint of any backpacking boot are hitting trails throughout the U.S. for Backpacker magazine's latest Zero Impact Challenge.

The boot challenge is the third in a series put forth by the magazine. The first two challenges asked companies to make lower-impact backpacks and sleeping bags.

The latest challenge called for high-performance backpacking boots with low CO2 emissions. Five companies - Hi-Tec, La Sportiva, Oboz, Patagonia and Wolverine – answered the call and have turned in their boots, which will be tested by backpackers carrying 30 pound packs throughout the Northeast, Northwest and desert.

The Zero Impact Challenges pose significant obstacles to the entrants. Not only do they have to redesign products, switch materials or make items lighter, but they must create equipment that can stand up to harsh wilderness treatment and provide a high level of performance and protection.

They must also take intense looks at their supply chains, find out what kind of energy their suppliers use and figure out how each part of their products get from place to place. But the work is worth it for the companies, which end up with reams of information not only about their own operations and emissions, but the impacts and operations of the other companies.

And some companies have even created products that are now on the market, something that the challenges were intended to do.

"About three years ago, Backpacker's editors and staff started talking about global warming, how we wanted to cover it, how we wanted to incorporate the idea of sustainability into gear coverage, how we were going to reduce the magazine's impact, how we were going to talk to readers about it all," said Berne Broudy, a contributing editor to Backpacker and writer for its Green Scene blog.

But, she said, at that time there was more talk than action in the gear industry, and companies had plenty of reasons to stick with the products they already had. The Zero Impact Challenges were developed as a way to ensure that the participating companies would get something for their effort: real products and real, useful information.

Since the challenges focus only on CO2, that at least narrows down the information companies need to look for, but that doesn't make it easy. Companies need to ask questions about emissions at every part of their supply chain, sometimes getting definite answers, sometimes ending up with even more questions.

Drilling deep to find out the impact of every bit of material, to find out what kind of energy every facility uses, to figure out how many flights or other modes or transportation are used in the creation of a product has been the biggest challenge for many of the companies, Broudy said.

"It has been a bit of a detective story to track down exactly what type of energy generation facilities our different suppliers buy their power from," said Josh Fairchilds, a founder of Oboz Footwear. "There simply isn't the transparency on the electrical grid that we have come to expect in the West. When you add in the downstream suppliers for meshes, foams, stitching, laces, and all of the other parts of a shoe - it starts to get cumbersome."

And within the world of energy, one of the main difficulties can be changing the type of energy used to make products. Companies could find out what kind of power supply a factory has, but if it wants to go with a greener option, it needs to switch to a different facility with a different energy source or work with that supplier to change how they get their energy.

Fairchilds said he had an easier time, though, getting information about materials. "Most footwear material suppliers are very engaged in trying to understand the impacts of their manufacturing," he said. "In the past, it seemed that there was a little lip-service paid to the idea of 'greener' products, but very little substance. I am finding now that most materials suppliers have put more research and science into their claims. In that sense it has been easier than I expected to vet out the truth, and there is greater transparency."

But roadblocks still remain, such as with adhesives. One thing Fairchilds struggled with was finding lists of ingredients found in different adhesives.

Success You Can Measure

Two areas that companies from previous Zero Impact Challenges had the biggest success were product weight and shipping, Broudy said. Making products lighter leads to a long stream of other impacts (using fewer materials, lowering shipping impacts, etc), and changing the number of travel miles needed to make a product or shipping methods can have huge results, especially when it comes to using fewer flights.

The footprint calculation came from Cooler, which used extensive energy data provided from each company. The average pack had a 130-pound CO2 footprint compared to 190 pounds of CO2 for standard packs.

The companies shrunk their pack footprints by cutting down on pack weight, reducing buckles and zippers, and using recycled, recyclable and/or biodegradable materials.

Big Agnes, Feathered Friends, GoLite, Sierra Designs and The North Face had to create bags that were rated for 20 degrees Fahrenheit, and the bags were tested in Colorado, Vermont, Kentucky, New York and Utah for three months. The backpacks from the first challenge had been tested in the Grand Canyon and Colorado's backcountry. 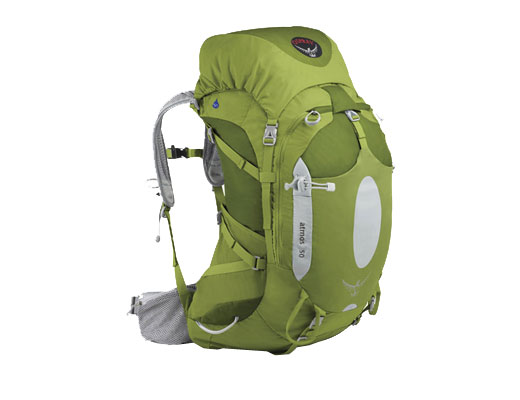 The North Face and Feathered Friends actually released their bags at the same time that the challenge results were announced, and GoLite is planning to have its bag out next spring.

Backpacker gave the companies participating in the boot challenge extra time, compared to previous challenges, to come up with marketable products due to the higher demands put on footwear as opposed to sleeping bags.

Once Backpacker is finished testing out the boots, then we’ll see just how small of a footprint boots can leave.