Mapping the future of meat — and what it means for sustainability

Mapping the future of meat — and what it means for sustainability

How much meat does the average American eat annually? 50 pounds? 100 pounds? Not even close.

If we look just at the livestock "Big Four" — cows, chickens, poultry and sheep — the average American adult consumed 198 pounds of meat in 2014, according to data from the Organisation for Economic Co-operation and Development (OECD).

The global average during that same year was 75 pounds. By 2024, these numbers are projected to increase to 207.5 pounds per person in the U.S. and 78.3 pounds globally.

Thanks to all of this meat eating, at any given point in the year, there are 19 billion chickens, 1.5 billion cows, 1 billion pigs and 1 billion sheep on the planet — more than three times the number of people. And these numbers are set to rise as the human population grows and more people shift toward a meat-based diet.

global meat consumption is projected to increase more than 4 percent per person over the next 10 years.

The number of cattle, sheep, goats and buffalo — animals that require quite a bit of land for feed production and grazing — alone is increasing by 25 million annually (PDF), according to the Food and Agriculture Organization.

Overall, global meat consumption is projected to increase more than 4 percent per person over the next 10 years. But as the maps below illustrate for a selection of countries and regions around the world, consumption won’t change equally across all types of livestock.

Looking again at the Big Four, consumption of poultry and sheep is predicted to rise 10.7 and 9.2 percent respectively, while the beef consumption is projected to remain stagnant and pork consumption potentially will see a 0.7 percent decline around the world compared with 2014 rates.

Why does all of this matter? Because while animal agriculture helps feed the planet, it also has a major impact on the environment. As ecologist Brian Machovina previously wrote at Ensia, "The livestock sector is responsible for approximately 15 percent of all human greenhouse gas emissions, about equivalent to all the direct emissions from transportation."

Addressing climate change and other environmental challenges requires a better understanding of the parts of the world where meat consumption is predicted to increase — or decrease — over the coming years. And also a recognition that different kinds of livestock have different environmental footprints.

The map below featuring data from OECD highlights trends in global beef consumption. Of the countries and regions represented, the top five countries for the amount of beef consumed per person in 2014 were Argentina, Uruguay, Brazil, the United States and Australia.

Between 2014 and 2024 the countries predicted to have the highest percentage increases in per capita consumption of those listed here are Vietnam, Mozambique, Tanzania, Turkey and Indonesia.

The total annual per capita consumption of these five countries still will lag far behind the leader — Argentina, projected to consume 95.2 pounds per capita annually. 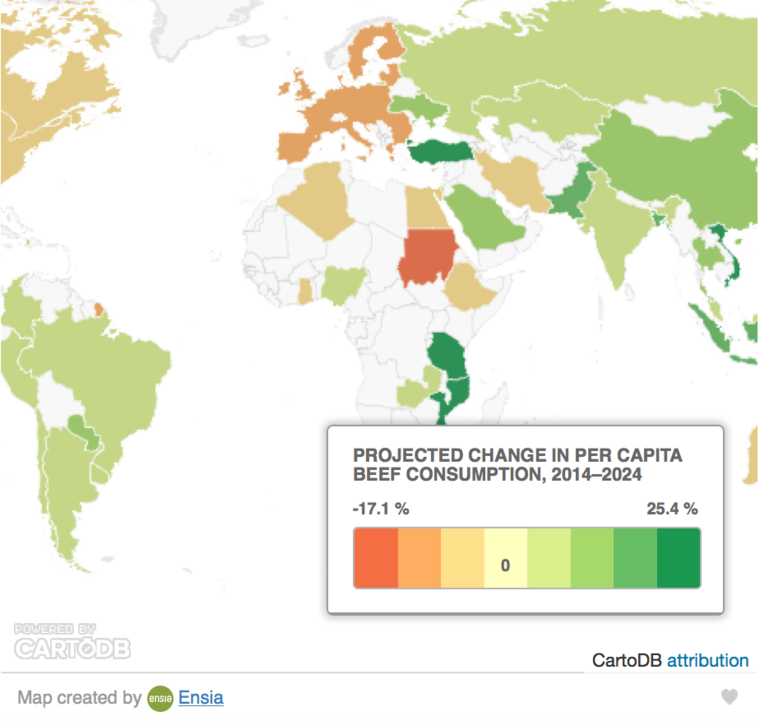 Poultry is — and will remain — the dominant form of livestock on the planet.

As The Guardian recently reported, 52 billion chickens are slaughtered each year and this number is likely to rise as consumption increases in places such as China and India.

At present the largest per capita consumers of chicken by weight of the countries featured here are Israel, the United States, Saudi Arabia, Malaysia and Australia. Over the next 10 years, Vietnam, Ukraine and China are projected to substantially ramp up consumption. 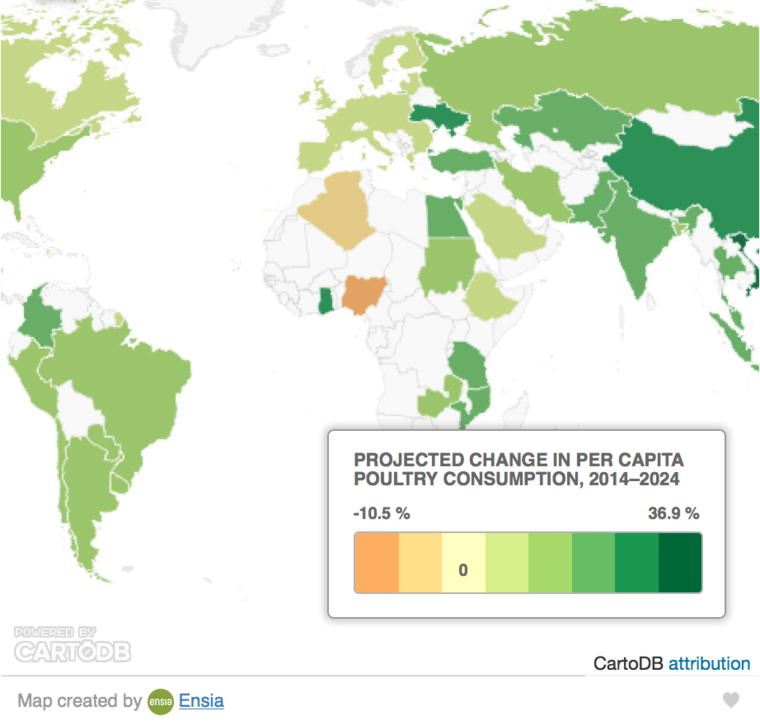 Globally, pork is projected to see a slight decline in the coming years. Of the major pork-consuming countries and regions, this decline will be the most pronounced in Canada, New Zealand and across the European Union.

But not all countries are predicted to see declines. In 2024, the leader among the locations featured here will be Vietnam at 76.1 pounds per capita — a 19.9 percent increase over 2014. 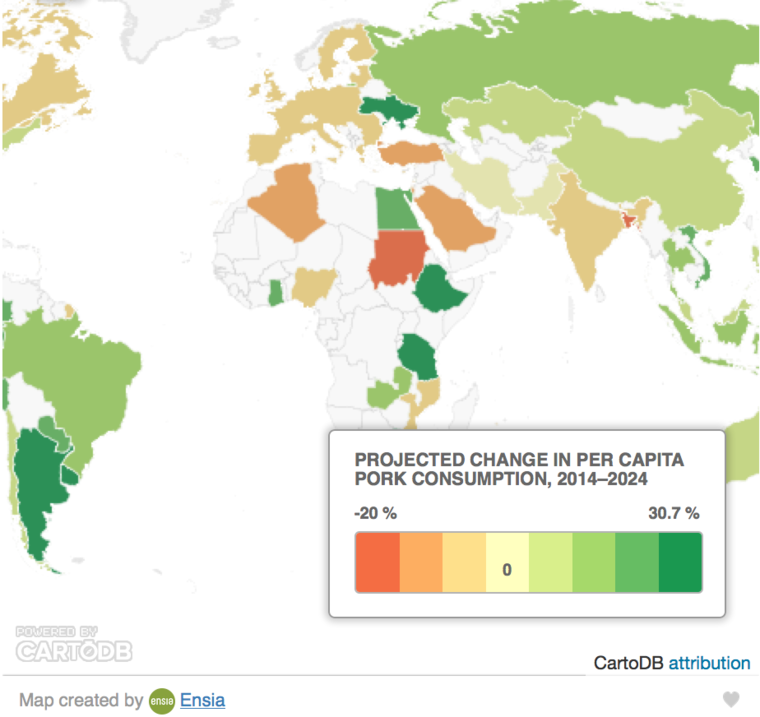 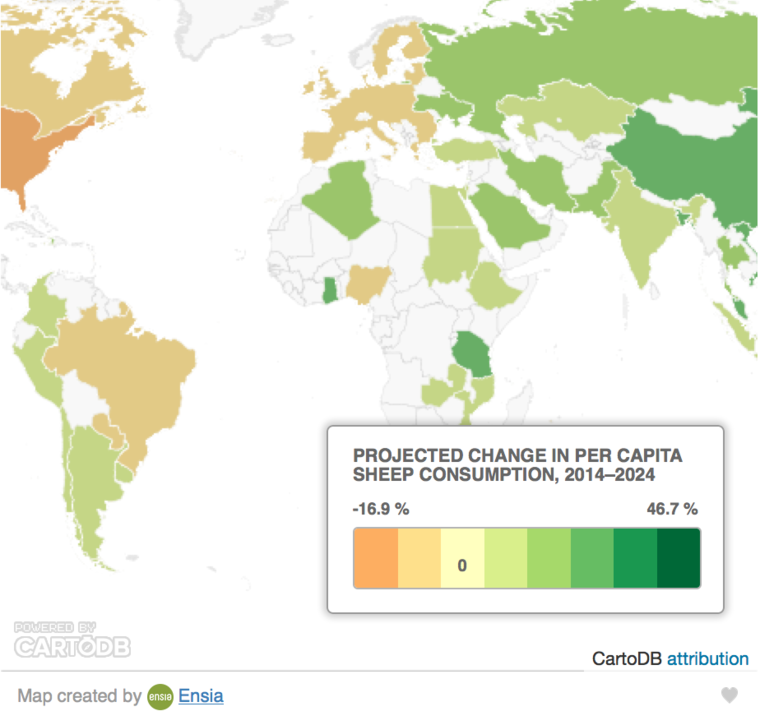 So what’s the takeaway message? As overall meat consumption continues to rise, the type of meat we consume makes a difference for the environment.

As previously reported at Ensia, switching from beef to chicken or pork significantly can reduce diet-related greenhouse gas emissions. Choices we make while eating out or at the supermarket matter when it comes to the question of meat’s impact on the environment.

How the food industry designed a market for turkey tails

Sustainable meat — made in a box?