I was in Washington D.C., on a Friday evening and the mood was mixed: the optimism of the collective voice, the worry of time beating us and anger that governments — the Trump administration in particular — are still enslaved by the fossil fuel companies.

It was the eve of the People’s Climate March, which would fill the streets of the capital with people, and the B Team had convened 100 women working in climate. Among the sisters, the commitment and the determination to act was remarkable, and strong solidarity ensured an affirmative evening where more than 100 women stood with "her" — Mother Earth.

For working people, the facts were clear: There are no jobs on a dead planet, and while our grandchildren may work in energy, they won't work in fossil fuels. However, we will stand by vulnerable workers, for we cannot accept stranded workers or stranded communities. 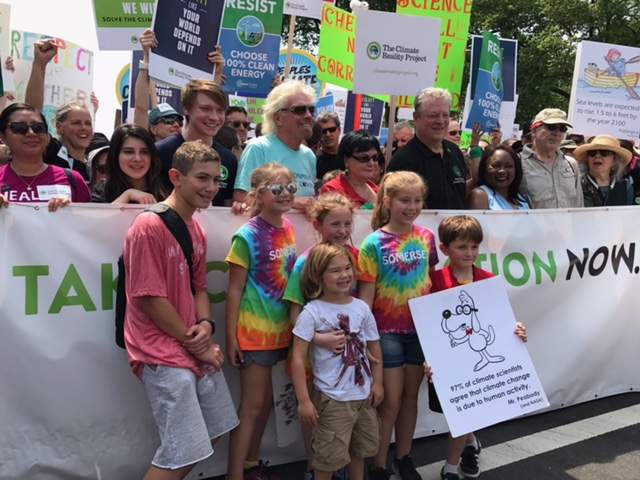 We Mean Business
<p>Sharan Burrows, Richard Branson and Al Gore at the People's Climate March.</p>
For many women, climate vulnerability is not a future issue but today's reality. Research clearly shows (PDF) that women throughout the world are particularly vulnerable to the threats posed by a changing climate. In countries with marked gender inequality, four times as many women as men die during floods. In some disasters, women and children are 14 times more likely to die than men. This phenomenon will grow more frequent with global warming. Gender justice and climate justice must walk hand in hand. That's the promise of the U.N. Sustainable Development Goals (SDGs).

Saturday dawned in D.C., hot and humid, as climate reality showed its face. But 200,000 people turned out to send a plethora of messages to the Trump administration with 370 marches worldwide. The energy was catching and the signs equally creative: the revolution should be rising, not the sea levels. The scale of the climate crisis brought business, labor, climate activist and student communities together, and the B Team marched with Al Gore's Climate Reality Group.

The determination was palpable, driven by the fact that people already are making energy choices that are shifting both investing habits and jobs. According to the U.S. Department of Energy (PDF), the clean economy in the U.S. supports over 3 million jobs already. More than 600,000 people work in renewable energy alone, and well over 2 million in building efficiency. The trend is steadily growing. These are the jobs of the future.

Investment in climate action will continue growing jobs. This is the only way to guarantee secure employment for millions of Americans and many more millions when that is replicated around the world.

To deliver a just transition to clean energy or the broader industrial transformation, workers, many of whom are on the front lines of climate change, must be among the architects. When there are plentiful decent, secure jobs, they will embrace change.

Labor demands a just transition so that no one is left behind. To deliver the promise of the Paris Agreement, it will take everyone advocating for just transition measures, to secure retirement incomes, to draw investment in new industries in vulnerable communities and to effect skills development and redeployment. Workers must be a part of the social dialogue with their companies, and their communities must have the hope that government will support them.

The world is three times richer than it was three decades ago. We can build jobs on a living planet with the resources to realize the promise of a net zero future where decent work, human rights and equality are realized. Now, all it takes is political will.

Unions are partnering with entrepreneurs for a just energy transition