<p>The CEO of The Nature Consevancy talks about&nbsp;his new book and the future of business and natural capital.</p>

I first met Mark Tercek several years ago when he headed Goldman Sachs' environmental strategy, a capstone to more than two decades as an investment banker heading various business units for the company. This was pre-economic meltdown — Tercek fortuitously left the firm in 2008 just ahead of the crash — and Goldman still was seen as a pillar of the economy. As such, the fact that Goldman had a Center for Environmental Markets, which Tercek ran, was a bit of a phenomenon.

Tercek left Goldman to become president and CEO of The Nature Conservancy, where he has worked to meld his financial and markets savvy to lead TNC into a new era of protecting natural capital. This means working with companies — mining companies, chemical companies, consumer products companies and more — in innovative ways to demonstrate the opportunities for business in protecting natural capital. TNC’s 2011 partnership with Dow is one great example. Along the way, Tercek has become an articulate, inspiring and enthusiastic speaker on the topic.

Joel Makower: Tell me about the conversation with business around natural capital that you’ve seen taking place over the past year, post-Rio.

Mark Tercek: I would say, Joel — and I say this in the book — it’s not like the ideas are new. Academics have been writing about this stuff for a long time. What is new and is exciting is we’re taking theory and making it actionable. And that’s really important because the environmental movement and all the environmental nonprofits, one way or another, we need new strategies that will allow us to get more done bigger and faster.

I say that with real respect for all the environmental organizations because I know them all well. But though we win lots of battles, we could say we’re not winning the war. We need new strategies to get more done, to build more allies, to have better financial support.

Makower: Do you think the environmental community, with a few notable exceptions, haven’t really gotten the connection between economic and natural capital?

Tercek: No, I don’t mean to say that. An idea that I think has a lot of potential is natural capital for the environmental community, for three reasons.

First, we need more people on our side. This is especially true when we go to Capitol Hill to fight for policy. Most of our elected officials don’t think this is a very high priority for their voters. We beg to differ, but we’ve got to make it more evident. We just need more people on our side, and I’ll explain in a minute why I think natural capital allows for that.

Second, we need more financial resources. It’s hard to imagine environmental nonprofits getting bigger than we are today. Even mighty TNC, although we’re big, we still don’t have enough resources. In the past, we’ve been really fortunate at getting a lot of financial support, especially in the States, but that’s obviously going to be tougher going forward.

The third thing that is that environmentalists have to think about how we have a dialogue with the rest of society. We’re very, very good at preaching to the choir, and we’re also pretty good at criticizing bad guys, but we haven’t been very successful at connecting with mainstream America, or the mainstream people around the world. And so I think a natural capital approach addresses each of those things. It results in more people, more money and a better dialogue. 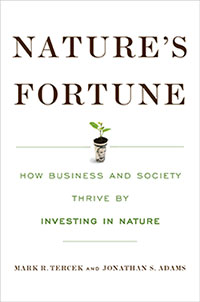 Makower: So back to my earlier question. Last year in Rio, there was a Natural Capital Declaration, and a bunch of companies, financial institutions, made some commitments and a fair amount of noise about natural capital. Have you seen much taking place since then that wasn’t taking place before?

Tercek: Yes, I think it’s really helpful when businesses make those kinds of commitments and then work with environmentalists, because both sides have to better understand the other side and roll up their sleeves and start making things happen. Businesses are very good at expressing impatience with theory and saying, “Come on now. Let’s get on with this. Is this real or not? Because if it’s not real, we’re busy. We have other things to do.”

If you think about the Unilevers or the Cokes and Pepsis or the General Millses or the Cargills or the Dows, all of which are expressing commitments in these areas and working with organizations like ours, it’s very encouraging. It’s also, by the way, happening with governments, which is ultimately even more important because government is a bigger investor in infrastructure than the private sector.

Makower: You mentioned your partnership with Dow and the importance of it. How’s it going?

Tercek: It’s going well, I think. Now, some people when they hear about the progress, they think, “Gosh, that’s kind of small stuff. It’s boring,” or, “It’s taking long.” That’s all true. This isn’t a world of immediate change or huge breakthroughs, but I’m pleased that the work is underway because without these preliminary breakthroughs, we’ll never get onto bigger things.

We’ve submitted articles to peer-reviewed science journals, but that process takes a while. We want to err on the side of completely transparent disclosure both to satisfy critics that we’re trying to play this straight, and second, if people have better ideas we’d love to hear them, and third, if our ideas are any good, we’d like them to spread.

One of the kinds of things at Dow that are being considered are seawalls versus coastal ecosystems. I think the first lesson would be we environmentalists have to catch up and have our analysis on the green infrastructure be as robust as what is already available on the gray infrastructure. That’s one.

Second — and we didn’t know this going into Dow — it turned out that the plant in Freeport, Texas, their biggest plant, that’s our first pilot, is scheduled for some expansion and that expansion, therefore, requires installation of additional scrubbers in the chimneys. Our scientists hypothesize that tree planting might address local pollution just as effectively, and even at a lower cost. So we’re seeking the regulatory approvals now for reforestation to be substituted for scrubbers.

It’s not a done deal yet, but it looks very encouraging. And the trees likely would be planted up down the Brazos River, so there would be good community benefits, but also investments in perfecting the area’s water supply, important to everybody in the part of Texas, including Dow. We don’t know this for sure yet, but it might be the case in good wind patterns that Dow would be able to plant some of those trees in Houston to deal with local pollution. Again, we’re not there yet, but we could imagine an outcome where instead of investments in scrubbers — old-fashioned gray infrastructure — Dow will be investing in reforestation programs with all kinds of environmental and community co-benefits. That’s pretty exciting. These are the kinds of things we’re working on.

Makower: Do you have any sense that other companies beyond Dow are stepping up to this kind of research, or is this a one-off?

Tercek: I don’t think it’s a one-off. I think General Mills is analogous. General Mills is concerned about water issues in the areas where they do a lot of sourcing. And, in a fashion comparable to the work with Dow, a TNC team and a General Mills team in Mexico are evaluating the outlook for water issues there, and identifying what kind of investment local ecosystem might bolster the longer-term supply of the water that the agriculture community needs.

Makower: I would imagine that the extractive industries would be engaged in these kinds of activities.

Tercek: Yes. So with Rio Tinto, it’s a different kind of project. Rio Tinto is building that huge mine in the Gobi Desert. They already have a commitment to be biodiversity-positive, although I think between you and me it’s rather loosely lived up to. But in the case of Mongolia, we persuaded them to try harder to do it very, very well, and the government helped us with that.

So with regard to that huge mine, they’re using TNC science. TNC’s mapped out the entire Gobi ecosystem. The only problem with this is we started a little bit late, so some of the mine planning already had occurred. That’s too bad. Always starting early is better. Rio Tinto already committed to offsetting environmental harm by creating protected areas. But now, with our science, they’ll create those offsets with an eye on the entire ecosystem so we can optimize the value of the offset and protected area.

What we hope will happen out of this project are two or three things. One, with the example of Rio Tinto and the government of Mongolia’s engagement, we’d like to require other players in the Gobi to make Rio-like commitments and have their offsets aggregated with Rio’s so you could have really well-designed and big offsets. We’re not there yet, and what will be hard there is whether the Mongolian government live up to that, because it’s a young government and under a lot of pressure.

Beyond Mongolia, we’d like, again, to use Rio Tinto’s example and leadership to get the other leading mining companies to agree that this is a smart way to do business. It doesn’t cost very much out-of-pocket and arguably benefits the company’s position in the long run, and these are no-brainer investment decisions, I think.

Makower: You mentioned no-brainer investment decisions, and I’m wondering what hope you have in your former colleagues at Goldman Sachs and their Wall Street peers in coming to understand how natural capital investments fit in with traditional financial investments.

Tercek: That’s a really good question, and it’s on my mind because I’ve just spent time with the people at Goldman and other financial institutions. I think that the financial crisis knocked everybody off their stride and Wall Street firms had to hunker down and deal with first things first.

But now that period’s largely behind, and I think what was true when Hank Paulson [former chairman of Goldman Sachs, former Secretary of the Treasury, former board chair of The Nature Conservancy] asked me to lead the environmental effort for Goldman in 2005, is still true. If you want to be a really superb advisor or investor on a global basis, environmental issues have to be part of your toolkit.

A Wall Street firm can really add a lot value because a lot of what Wall Street does is constantly scour the world for best practices, best ideas, sharing them with clients, helping clients improve. They ought to do that in the environmental space, too. I think they are now realizing that, again, and they’re getting back into that.

A really good example of that would be Matt Arnold at JP Morgan, who has really good environmental bona fides, and he’s there to help them do that. But in the other firms, including Goldman Sachs — they all have their environmental units — we’re going to do everything that we can to encourage them to be champions of the kinds of things we want to do. They don’t have unlimited clout, but they have a lot of clout, and we just want them to use the clout they have.

I’m hopeful that that’s about to happen. We’ve missed them, because there was a period where they were really engaged and then they kind of backed off. But I think we can get that going again.