Marks & Spencer reports making major strides toward its green goals and says it has already achieved 70 of 180 objectives contained in the sustainability agenda the U.K.-based retailer calls Plan A.

Accomplishments listed in the company's latest account of its Plan A efforts include achieving a 92 percent recycling rate for operational waste in the chain's stores, administrative offices and distribution centers in the United Kingdom.

M&S launched Plan A in 2007, expanded the 100-point list of sustainability commitments to 180 objectives last March and issued a three-year progress report this past June. The update released Friday, which the company is calling a half-year report, charts progress in recent months. For example, the current recycling rate is an improvement of 39 percentage points compared to the 53 percent recycling rate reported in June. Marks and & Spencer is aiming for zero waste by 2012.

Marks & Spencer is among the global retailers that have set ambitious environmental goals and has declared it intends to become "the world's most sustainable major retailer by 2015"  by achieving all its Plan A commitments. The chain has edged ahead of U.K. giant Tesco and Walmart, the world's largest retailer, in sustainability and environmental performance, according to the report "Retail: A Sustainability Benchmark," which was released last spring by Five Winds International and GreenBiz.com. 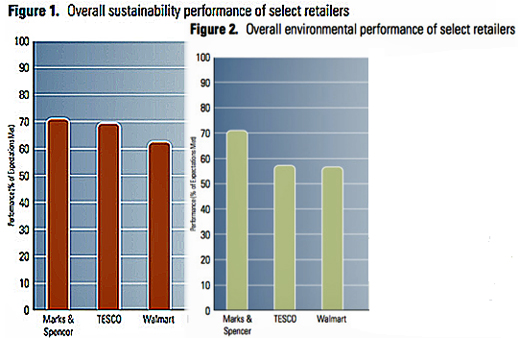 In addition to pushing green performance among retailers, such competition spurs U.K. businesses and government agencies to greater action and helps to place the country among the world leaders in sustainability efforts.

In a post for GreenBiz.com last week, Forrester Research Vice President and Research Director Christopher Mines credited "leading companies' efforts to improve their sustainability posture" as one of the three reasons why the U.K. is the global front-runner when it comes to using IT to further sustainability. Mines wrote:

"Whether it's Astra-Zeneca in pharma, Tesco and Marks & Spencer in retailing, BA in transportation, or the U.K. Ministry of Defence in the public sector, leading U.K. institutions are making the commitments and investments to transform their business processes in a more sustainable direction."