<p>Massachusetts knocks California from the No. 1 spot to claim bragging rights as the state that's doing the most to advance energy efficiency.</p>

Massachusetts has been named the state that's doing the most to advance energy efficiency by landing the top spot on the American Council for an Energy-Efficient Economy's annual state scorecard.

In moving to the lead position from second place, Massachusetts knocks California from its long-held No. 1 spot. The Golden State had a four-year run as the top scorer and now moves to second place as the ACEEE rankings celebrate their fifth year.

"It's nice to be No. 1, we have earned it," Massachusetts Governor Deval Patrick said in a news conference this morning when ACEEE scorecard results were released.

Below is a map showing the results; darker-colored states scored higher in energy efficiency: 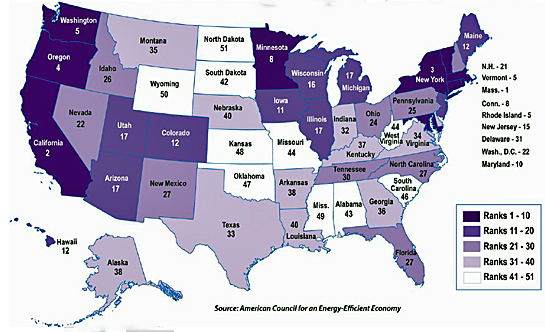 The ACEEE compiles its rankings of the 50 states and the District of Columbia based scores in six areas:

Here are the states that made the top 10 this year:

And here's a list of the states showing the most improvement:

"Clearly, 2011 has not been very kind to our economy, but energy efficiency remains a growth a sector," said the scorecard's lead author Michael Sciortino, adding that the findings of this year's report show that states have consistently saved money and energy and created jobs as a result of their efficiency efforts.

While Sciortino praised the top 10 states as being on the cutting edge for efficiency activities, he said there was a "general upward trend" among all the states as a result of widespread adoption of energy savings targets and action on those goals. In a nod to California, he noted that "many states borrow from California's play book" when it comes to energy efficiency and that its slip in the rankings "does not necessarily mean that the state is backsliding, but that other states are moving forward faster."

Massachusetts' surge resulted from aggressive action on its Green Communities Act, which was passed in 2008. Among other things, the legislation has led to better collaboration with utilities and development of statewide energy efficiency plans that have three-year cycles. The current plan calls for electric savings equal to 2.4 percent and national gas savings equal to 1.5 percent of sales in 2012, which are some of the more ambitious target in the country, according to the ACEEE. The Green Communities Act is expected to result in investment of $2.2 billion in energy efficiency and energy demand management by 2012, the organization said.

"We see energy efficiency as our first fuel --- what we look to first to meet our energy needs," Patrick said of his state, which has a goal of reducing greenhouse gas emissions by 25 percent from 1990 levels by 2020. "That strategy is working. We are investing more per capita on energy efficiency than any state."

The ACEEE 2011 state scorecard and report are available for free download with registration from the organization at http://www.aceee.org/research-report/e115.

Image of U.S. map via Shutterstock.com